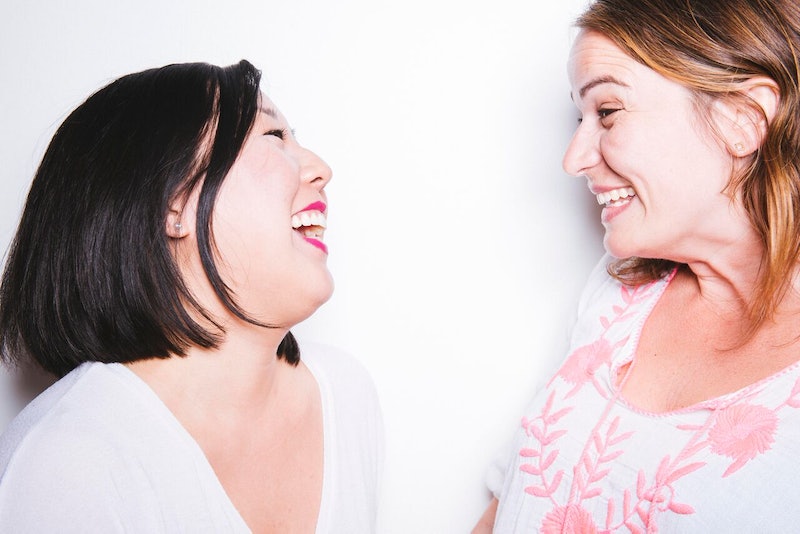 Simple conversation can sometimes be, well, kind of hard. Especially for those of us on the shyer end of the spectrum or who aren't super comfortable with new people. It's why knowing ways to become more likable can actually majorly help us out when it comes to socializing in new environments, like at parties or networking events.

I used to be one of the shyest kids in my class growing up, and I honestly feel like that shy kid is still who I am deep down at the core. However, a few major developmental experiences (i.e being forced to go to sleep away camp five summers in a row) eventually working at a job that entailed a ton of social events and client interactions, taught me that when it comes to appearing charming and extroverted, you can absolutely fake it 'til you make it.

And the thing is, socializing is like a muscle — the more you do it, the easier it gets. I now genuinly hardly think twice about attending a work function or hosting an event where I don't know many people. Friends who met me as an adult are genuinly shocked to know I was shy growing up, and usually assume I'm 100 percent an extrovert. That's how much you can truly change the energy you give off.

If you're looking to up your socializing game, here are 11 hacks for being super likable in conversation.

This tip comes from me: nothing is less appealing than talking to someone who is clearly scanning the room for someone else they want to talk to or checking their phone. Making the person you're talking to feel like they are the most interesting thing in the room will instantly win you a fan. Plus, seeming distracted is just rude.

How to Win Friends and Influence People, $9, Amazon

The Social Psychology Bulletin noted that subtly mimicking the person you're talking to sends subtle signals that you're engaged and interested — and even attracted. This will instantly help you send good vibes.

A piece for Psychology Today by psychologist Ryan Anderson noted that people generally remember the first and last things in a conversation best. So greet them with a smile and compliment, and think about ending the conversation a little earlier than you might usually — before you run out of interesting things to say.

Did you know that chewing gum can help reduce stress? According to a study featured in Confectionarynews.com, a study out of Japan showed that chewing gum for ten minutes can reduce anxiety. So grab a stick before socializing if you're nervous.

Anderson also noted that studies show people really like hearing their own names, so one of the best ways to endear yourself to someone quickly is by using theirs. This is also good incentive to actually remember people's names when introduced.

This is another personal tip, but you can read it on countless articles about making a good first impression. There's just something about someone who is confident enough to look you in the eyes that makes you instantly trust them. Plus, good eye contact shows the other person you're not bored.

According to a Business Insider piece on habits of exceptionally likable people, likable people smile a lot. It instantly cues others that you're friendly and open, and helps put them at ease.

According to a study out of Harvard, confidence actually matters more than physical attractiveness when it comes to getting dates. They note this is likely because confident people often smile more and make better eye contact — little cues that a person is trustworthy. My advise for shyer people is to pretend like you're putting on a show — acting more confident can be as easy as getting into character.

9. Make The Other Person Comfortable

And a final tip from me: focus less on how you feel, and more on making the other person comfortable. I find this instantly makes me more attentive to what the person is saying, as well as makes me come across as more confident and self-assured. I think of myself as the "host," even if it's not technically my party. I usually find most people are relieved that someone took the initiative to break the ice.

According to Stanford professor Jeffrey Pfeffer in a piece for Time Magazine, asking others for advice is a super quick way to ingratiate yourselves with them, because it shows that you value their opinion. If you're about to make a new purchase but can't decided between two models, bring it up in conversation. Or keep it as simple as asking the other person which fancy cocktail they think would taste best.

According to that same Time Magazine piece, people often associate what you say about others to how they feel about you. That means if the first words out of your mouth are critical or negative, other people will start have a less positive impression of you overall. Instead, mention something that you love about another person at a party, point out an outfit you love.

Being likable isn't rocket science. Just make sure you seem interested and attentive, and remember — you have a ton to offer.