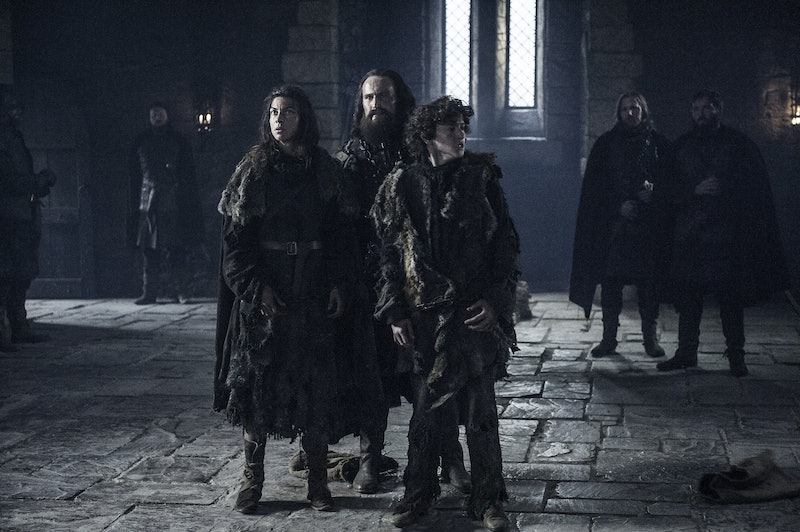 Sometimes, the best Game of Thrones theories come from your living room, and my roommate has a good one about the return of several characters in Season 6. Is Rickon setting a trap on Game of Thrones ? The arrival of the youngest Stark at Winterfell may not mean his imminent doom at the hands of Ramsay Bolton. Believe it or not, this all has to do with the Red Wedding.

Remember that? Season 3 ended with the deaths of Cat and Robb Stark at Edmure Tully's reception. Season 3 is also the last time that we saw Rickon Stark and Osha. They were sent to House Umber for safety. In George R. R. Martin's books, the character Smaljon Umber (who delivered Osha and Rickon to Ramsay in the HBO series) died at the Red Wedding. He threw himself in front of Robb Stark. So, it would be kind of rude to introduce this character as a Stark betrayer in Season 6, don't you think?

Maybe something fishy (no pun intended, House Tully) is going on here. Plus, the speech that Smaljon Umber gave to Ramsay about hating his dad was playing into Ramsay's hand a bit too much. Why is this happening now? For one thing, Rickon Stark is presumed dead by most of Westeros. They needed to wait until Ramsay Bolton knew the truth about Theon and the farmboys. It also helps that Sansa is out of Ramsay's reach, as well.

But like, back up, because I want to talk about Edmure Tully, Cat Stark's brother, as well. We haven't seen him since his own wedding either. Has he just been playing house with Rosalyn Frey, blissfully unaware of the plight his nieces and nephews have been suffering? Or has he been quietly plotting his way back at the Boltons with the Umbers? The North remembers, after all. Tobias Menzies is rumored to return to Game of Thrones as Edmure in Season 6, so fingers crossed.

It's still probably OK to worry about Rickon — Sansa married Ramsay as part of a strategic move, and look what happened to her! Still, the prospect that Osha, Rickon, and Shaggydog's head might be a Trojan horse is an exciting one. I know that Rickon is a bit strange, but he did not seem convincingly upset that his direwolf had been beheaded. Season 6 has been serving up the unexpected, from Jon Snow's Castle Black walkout to Melisandre's true form, so I would certainly not be surprised.