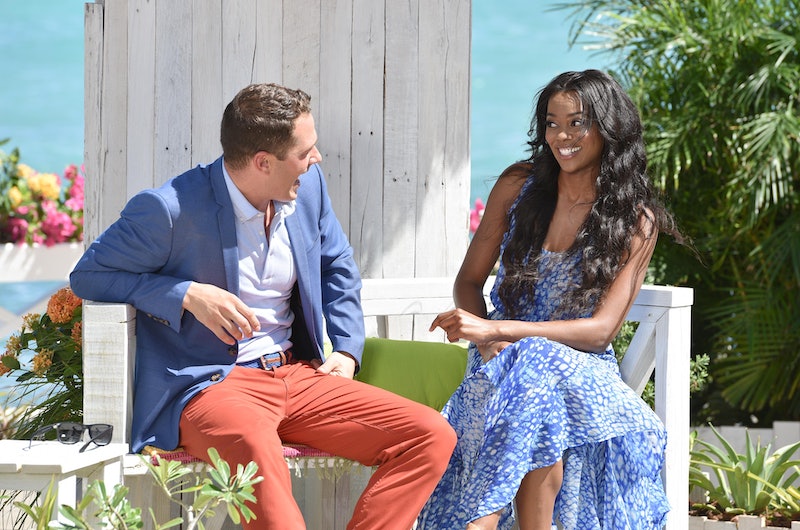 Bachelor in Paradise fans listen up, because you don't have to wait until August to get your fill of tropical romance. On May 17, Coupled will premiere on FOX, and it's a new twist on the classic find-love-on-an-island-with-a-dozen-of-your-friends formula. (That's a classic, right? I do all my dating on private islands with my best buds.) But, while Bachelor In Paradise flip flops between giving the women the power to send home contestants one week and the men the power the next, Coupled gives that initial choosing power to the women EVERY week. When a man shows up on the island, they have the ability to say yes or no first. And, if you're worried that will lead to competition for the slim number of men, don't be. An exclusive clip from the Coupled premiere shows that these women are pretty considerate of their friends.

In the video, three women are discussing how it's a little awkward that multiple women are dating one guy. "They've had time to settle in, how are the dates moving along?" One asks. "Are they actually like running this as the three amigos? how does that work?"

Another chimes in agreeing that it's a little strange, because you have to keep in mind all the women's feelings. "Yeah, like, 'Do I need to back off and let her have some conversation? When do I step in? Am I being too aggressive? Am I overstepping and now she feels like she's not getting any time?' That is very overwhelming."

I love that the conversation here included awareness of how the other woman dating him might feel. There was no jealousy or cattyness or worries of the man picking another woman, because the men don't get that option right away anyway. The great thing about putting the ladies in charge of getting to saying yes or no to the men first is that it sort of removes the competition aspect from the group and will hopefully lead to a fun camaraderie throughout the course of the show.

I'm sure there will be plenty of drama, of course. What dating show doesn't have that? But, at least this clip shows that things start off pretty empathetic between the ladies. I can't wait to see how things unfold from here.