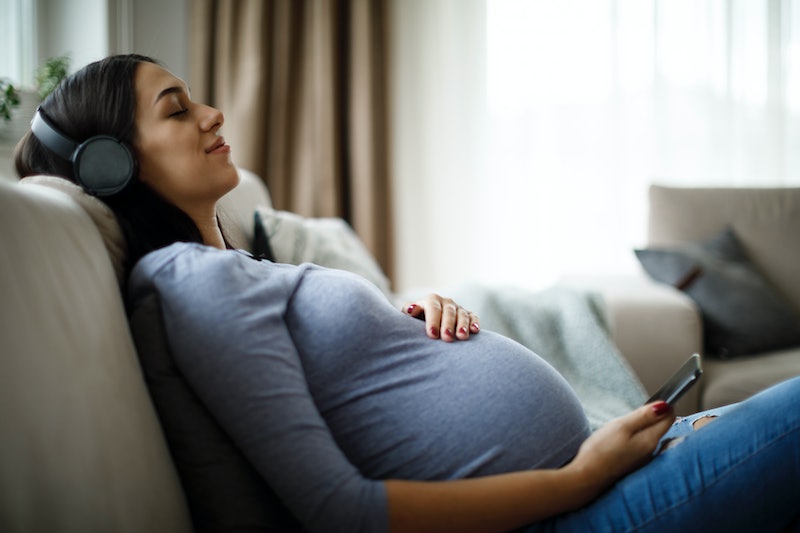 In my high school sex ed class, our unit on pregnancy consisted primarily of three things: Learning, biologically, how conception works; being traumatized by The Miracle of Life video; and my teacher saying, “Just don’t have sex, kids.” Needless to say, there are a lot of weird things about pregnancy I didn’t learn in school. I’m sure I’m not alone here, especially considering that a lot of American students don’t get much in the way of sex ed at all.

With this lack of education as a basis, it’s easy to stay ignorant about pregnancy. After all, a lot of young women understandably devote a lot more time to learning how to prevent pregnancy than they do to understanding what’s going on in a pregnant body. For me, it wasn’t until my sister and some of my friends started having kids that I began to learn about some of the strange things that happen to women then they are growing little ‘uns. From the limited perspective of an observer, I can say this about pregnancy: It’s amazing, it’s uncomfortable, it’s miraculous, and it is very weird. Like, crazy weird.

You’re probably already familiar with a few of the major physical and emotional side effects of pregnancy, including mood swings, morning sickness, fatigue, and food cravings, but read on for nine things you didn’t know about incubating a human:

When you’re pregnant, your levels of the hormones estrogen and progesterone go way up. These changing hormone levels can do a number of crazy things to the body, one of which is causing your body to produce extra melanin, the substance that contributes to the color of your eyes, hair, and skin. This melanin spike can cause dark patches to appear on women’s skin; when the patches appear on the face, it’s known as the “mask of pregnancy,” which sounds like it should be part of an awesome, magical superhero costume, but instead is probably sort of irritating. Excess melanin production is also responsible for the dark line that appears on many pregnant women’s bellies (aka the “linea negra”), as well as their areolas darkening.

If that weren’t enough, pregnancy hormones and friction from weight gain during pregnancy can also cause skin tags. Where is that whole “pregnancy glow” thing I’ve heard so much about?

During pregnancy, a woman’s ovaries and placenta start producing relaxin, a hormone that, as its name suggests, relaxes her ligaments and muscles in the pelvic area and her cervix. This relaxation makes it easier for her to squeeze a baby out of a very tight space, but it can also cause looseness in the ligaments of the pelvis before birth, which is why so many pregnant women have that telltale pregnancy “waddle.” Their pelvic ligaments have loosened up, which has altered their center of gravity, causing them to take a wider-than-usual stance.

3. You can have two separate pregnancies at the same time.

No, I’m not talking about twins. I’m talking about superfetation, a rare phenomenon in which a woman gets pregnant, continues to ovulate, and then gets pregnant again. It happened in 2009 when Julia Grovenburg, from Arkansas, got pregnant with a girl, and then got pregnant with a boy two weeks later. She ended up delivering both babies on the same day, even though one was two weeks younger.

Superfetation is very rare; it requires two things to happen that aren’t supposed to — first, a woman has to keep ovulating after she’s already pregnant, and the new fertilized egg has to be able to implant in a uterus that already has an implanted egg. There have only been 10 recorded cases of it happening, though it’s possible that there have been more that simply haven’t been recognized as superfetation — after all, if two babies were conceived only a few days apart and delivered at the same time, most would simply assume that they were fraternal twins.

4. A super-powered sense of smell.

Many pregnant women report having a heightened sensitivity to smells, especially in the first trimesters of their pregnancies. Odors that they used to like, or not even notice, suddenly become overpowering. This superhuman sense of smell is a result of the increased levels of estrogen that women experience during pregnancy, though it’s not clear exactly how the hormone changes the way women smell.

Unfortunately, this ultra-sensitivity is less a super power than it is a major drag. For many women, strong odors can induce nausea and amplify morning sickness.

5. After pregnancy, women retain cells from their babies.

After a woman gives birth, she may continue to have fetal cells originating from her baby for the rest of her life, in areas all over her body, including her brain, heart, and blood. This phenomenon is called “microchimerism” (the word borrows from the Greek myth of the chimera, a hybrid creature). According to Vanessa Hua at The Atlantic, there is research to suggest that women who have male fetal cells in their bodies, transferred to them from their sons, have a lower mortality rate and a lower risk of breast cancer and Alzheimer’s disease. Researchers believe that this may be because microchimerism increases “immune surveillance,” referring to “the body’s ability to recognize and destroy pathogens and cells that might become cancerous.”

Most of the research on microchimerism has focused on studying male fetal cells in women, because they are easier to detect than female fetal cells, but women can retain fetal cells from children of both sexes. Although microchimerism (that is, having cells from someone else living in your body) occurs most commonly through pregnancy, it can also happen through blood transfusions, organ transplants, or through having a twin.

7. Heartburn? Your baby may have a glorious head of hair.

A study from Johns Hopkins University found that women who have bad heartburn during pregnancy tend to have hairy babies. According to CBS News, heartburn “usually strikes in the third trimester and is due to estrogen causing the esophageal sphincter to relax, which allows stomach acid to splash up into the esophagus.” Estrogen also happens to be responsible for your baby’s hair growth. Thus, it’s not the baby’s hair that causes the heartburn; the issue, rather, is the estrogen that’s causing both your little one’s hair growth and the relaxing of your esophageal sphincter (the ring of muscle that’s supposed to keep stomach acid from coming into the esophagus).

8. You get sick more often.

When you get pregnant, your body floods with human chorionic gonadotropin (hCG), a hormone that tells your body it’s pregnant and helps it prepare for housing a growing fetus. Human chorionic gonadotropin suppresses your immune system to prevent your body from rejecting the fetus, which is obviously important. But that means that you then have a suppressed immune system, which, in turn, means you’re going to get sick more easily.

9. Newborns can remember the music they hear when they’re in the womb.

I always assumed that people who strap headphones playing classical music to their pregnant bellies were just being silly, but research suggests that it never is too early to start your kid’s musical education. A 2013 study had a group of pregnant women play “Twinkle, Twinkle, Little Star” to their unborn babies five days a week leading up to birth. After the babies were born, the scientists played the song to the babies, as well as babies who hadn’t listened to it in utero. The babies who had heard “Twinkle, Twinkle, Little Star” many times before showed increased brain activity upon hearing it again, suggesting that they recognized it from when they were still inside their mums. The babies who hadn’t heard the song before didn’t have that reaction.