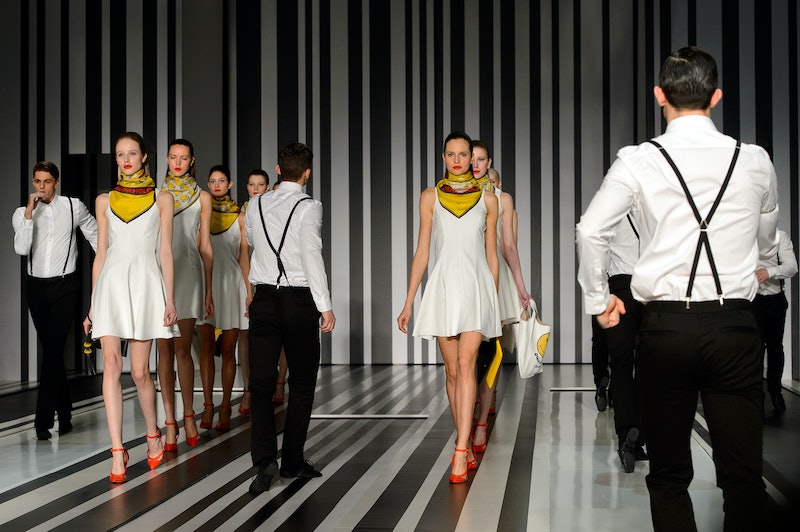 The accessory designer is known for her edgy antics, most notably a stage made out of 50,000 dominoes, and a toy factory. But if we were to choose, her latest presentation with its frolicking men tops the rest. Titled "Counter Culture," the show played with modern cultural symbols reinterpreted in playful but refined accessories. Everything started innocuously enough, with white-dress- and yellow scarf-clad models sauntering down a black and white striped runway.

However, the show quickly turned into a grocery shopping farce, featuring models posing on a checkout counter-style conveyor belt and male models carrying the most stylish wire shopping baskets we've ever seen. The dramatics continued as metal grocery carts were thrown in the mix, a delightful complement to the food brand logos emblazoned across Hindmarch's accessories.

Perhaps it was the grocery store vibe that made Hindmarch's divergent conclusion to the show so pleasing, but either way, the line-dancing men who appeared on the runway at the show's finale were absolute perfection. While models showed off the last of Hindmarch's bold accessories, her male performers began to twirl, moonwalk, and strut their way into the hearts of every single audience member at the show. Maybe it's just us, but the theatrics caused an OK Go flashback the likes of which we haven't had since the infamous treadmill dance video debuted in 2009. The dancers formed a whirling perimeter around Hindmarch's models as they made a last trip down the runway. However, the performance really kicked into high gear when a series of disembodies hands appeared through holes in the stage wall and floor and began to accompany the dancers with trumpets, string instruments and jazz hands.

We don't like to keep score, but a good dance routine that doesn't include twerking or grinding of any kind deserves major points when executed at the end of an admittedly beautiful, if oddball, fashion show. It seems that Fashion Week's eminent designers are setting a trend by including thespian elements in their shows, using performance art to highlight the main themes or undercurrents of their collections. And if it includes more choreographed dance routines, we're entirely on board.