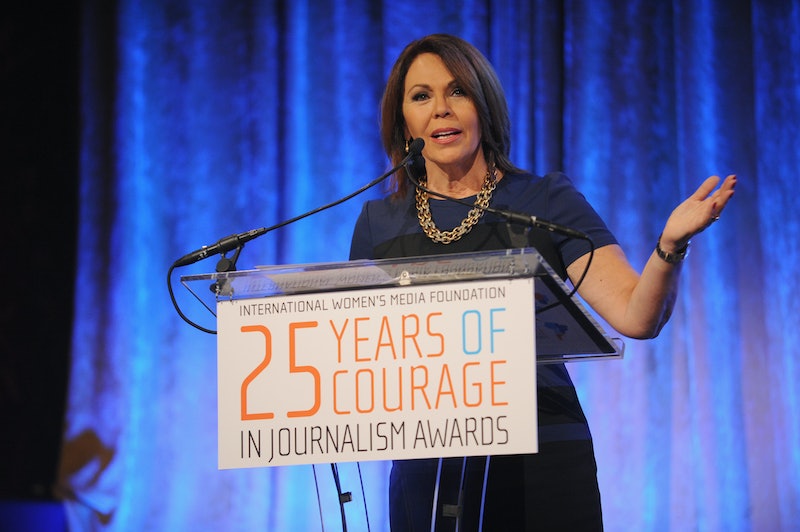 It's a pretty widely accepted fact that women's representation in media leaves a lot to be desired. But if you want to know just how dismal the situation is, just check out the latest Women's Media Center annual report. Spoiler alert: it isn't pretty. From movies to television to newspapers, we've got a long way to go.

In the land of movies and television, women made up only 18 percent of behind-the-scenes roles, which is only a one percent increase from 1998. Women made up 12 percent of directors, which depressingly is actually decent progress from years past. In behind-the-scenes roles, women are most likely to be producers, but still only make up 38 percent of all producers. And the highest paid actress in Hollywood, Angelina Jolie, is paid roughly as much as the tenth highest paid actor, Liam Neeson. Women also only get about 30 percent of speaking roles. In other words, 70 percent of characters who get to speak are men. And this is still progress.

So really, it's unsurprising that girls as young as six are starting to view themselves as sex objects. Because overwhelmingly, that's how women are portrayed.

You'd think that outside the "sex sells" purview of Hollywood, media would get a little better. But...no. Men have made up almost two thirds of all newspaper newsrooms from 1999 through the present. Over that same period, the number of female supervisors has declined. And the number of women of color in newsrooms is also, mostly, declining as well. White men also dominate on Sunday political shows, and are the overwhelming majority of sportscasters and newspaper columnists. Plus, most quotes in news stories come from men. What the hell kind of world are we living in?

No really, what the hell kind of world are we living in? Because it's probably not the one we see in movies, on television, or even learn about through the news. In reality, the majority of people on the planet and in the country are women. Yet when it comes to portraying that world in the media, whether the portrayals are fictional or factual, women are the overwhelming minority.

For more info on women in media, including topics of video games, social media, and more, check out the full report here.

More like this
Black Women's Equal Pay Day Highlights An Upsetting Problem
By Brandi Neal
Women Around The World Are Cutting Their Hair In Solidarity With Mahsa Amini
By Darshita Goyal
Bennifer, Kravis, & 14 Other Fun Celeb Couples Halloween Costume Ideas
By Emma Carey and Brittany Leitner
Why Harry Styles & Olivia Wilde Make A Great Couple, According To Astrology
By Nina Kahn
Get Even More From Bustle — Sign Up For The Newsletter