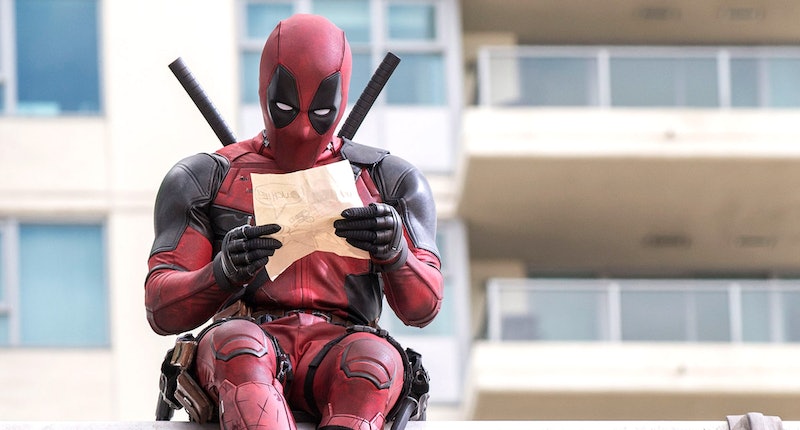 If anyone can make fun of Deadpool, it's Deadpool himself. And that's exactly what the Merc with a Mouth made clear of by joining in on his very own Deadpool Honest Trailer. Yep, Ryan Reynolds himself took on the role of Deadpool once again to help ScreenJunkies, known for their "Honest Trailer" series, make fun of the R-rated, record-smashing flick. And, as expected, his contributions made the comedy web series' Deadpool edition nothing less than perfection. Why? Because essentially, Deadpool was existing in his own natural state: ruthlessly, vulgarly, and hilariously, tearing things apart.

But how did the busy Reynolds get on-board for the job? Considering that actors taking part in their own Honest Trailers is not exactly a common trend for the series — Honest Trailers typically make fun of the movies they're about, so most stars likely don't want to take part in them — it's surprising that Reynolds decided to join in. Yet how the collaboration came about makes some sense; it looks like fans may actually have Twitter to thank for this one. According to The Hollywood Reporter, the creator of ScreenJunkies, Andy Signore, came up with the idea for Reynolds' cameo and reached out to Deadpool co-writer, Rhett Reese, about the concept via a direct message on Twitter. In response, Reese assisted in writing some of the hilarious lines, and with some more help from fans on Twitter, Reynolds himself joined in. It all took a lot of planning and scheduling, but judging from the final product, it was definitely worth it.

Especially because the video makes clear through its stylistic choices that Deadpool is basically already an Honest Trailer. Both the real movie and the "Honest" version feature mentions of Wolverine in the beginning, constant cursing, and jokes made about superhero stereotypes. Reynolds makes these similarities hilariously clear, saying in the Honest Trailer, "Can I listen to you do the honest names? I love that part. You know, the bit you do at the end of your videos that we 'borrowed' for our opening credits." Basically, these two coming together is nothing less than a match made in heaven.

So, can you expect Reynolds to return to do the Honest Trailer for Deadpool 2? Well, as Deadpool states himself in the video, "Don't ask me to do this again for Deadpool 2. I'm serious." However, I have a funny feeling that the filmmakers will find his way to pull this all off again. It is just too good to leave behind.