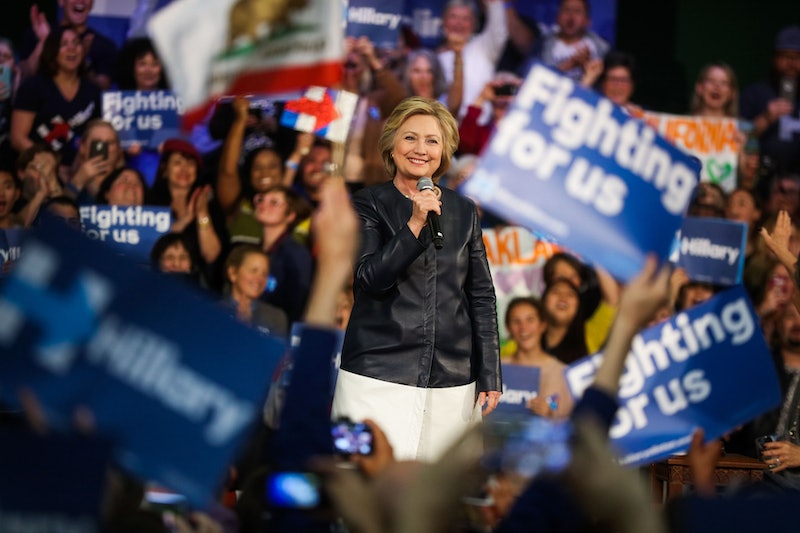 Well, that's another day of presidential primaries in the books, and the nominating races have inched even closer to their final conclusions. Of course, there's not much mystery at this point. Billionaire businessman Donald Trump is running unopposed and will be the Republican nominee, while former Secretary of State Hillary Clinton has a virtually insurmountable lead over Vermont senator Bernie Sanders. But that doesn't mean the process is done just yet. As such, maybe you're wondering how many delegates are left up for grabs?

If you're a Sanders supporter, that question should definitely be on your mind, because his odds are long and getting longer by the day. Thanks to the Democratic delegates being awarded proportionally, even winning a state outright doesn't matter much if it's a narrow victory. Currently trailing Clinton by 283 pledged delegates with just seven states to go (as well as contests in Puerto Rico, the Virgin Islands, and Washington, D.C.), Sanders needs blowouts far beyond even the scale of his 15 point win in West Virginia on Tuesday, a win which only narrowed the delegate gap by five.

So how many of them are still on the table, waiting to be claimed? On the Republican side, following Tuesday's voting, 375 delegates remain on the schedule, with Trump needing less than 178 more to claim the Republican nomination on the first ballot. That he'll ultimately get them is a foregone conclusion, hammered home by both of his opponents dropping out of the race last week.

On the Democratic side, there are a lot more still outstanding — 1,065 in total, thanks in large part to the enormous trove in the state of California. The winner of the Golden State primary will take the lion's share of 546 pledged delegates, and that's the state the Sanders campaign has zeroed in on when they've been challenged about the daunting, virtually disqualifying delegate math.

That eye-popping figure, needless to say, accounts for far more than Sanders' current deficit. But this is essentially a pipe dream — he'd have to win by a staggering margin (probably more than 70 points) to gain consequential ground, and polling from California right now shows Clinton up nearly double-digits. Simply put, even though 1,065 outstanding makes Sanders' 286 deficit sound like it could be overcome, in practice it's virtually impossible. That doesn't mean Sanders or his campaign have any intention of pumping the brakes, however, as he's repeatedly pledged that he's going to take this fight all the way to the Democratic National Convention in July.

This is basically all a long way of saying that the time is running out (really, for the Republicans, it already has), and despite the bevy of delegates still up for grabs on both sides, the chances of seeing a fundamental shift in the shape of either race are very nearly nil. In other words, it's time to start anticipating (or dreading, as your case may be) the upcoming general election between Clinton and Trump. Don't ever let anyone tell you this isn't a weird world, huh?