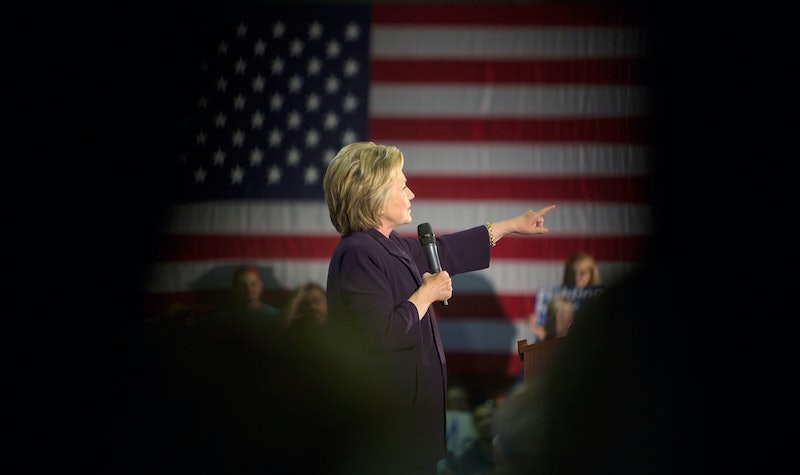 By my estimate, there are approximately one bazillion books about Hillary Clinton floating around on bookstore shelves right now — and at this point in Hillary-For-President Round Two, any lover of books and/or powerful women (in my case, both) should consider at least a few of them required reading before election day. After all, you can never have too much information as you make your way to the polls on November 8, 2016.

One glance at all that’s been written about Clinton across her epic political career makes it clear that opinions differ on the person who could become the nation's first female president. Biographers and political analysts certainly seem to love and hate Clinton in equal measure. And while that’s fine, (it’s our diversity that makes the world go ‘round, amirite?) the titles I’ve included on this list are decidedly neutral, (at least as much as possible) as far as Madame Secretary is concerned. Because I’m not here to get you to vote, I’m just here to get you to read. (Although, if you read and then decide to vote, that would be pretty swell.)

Here are 8 books about Hillary Clinton.

1. A Woman in Charge: The Life of Hillary Rodham Clinton by Carl Bernstein

Published during the 2008 election, this biography by Pulitzer Prize-winning journalist Carl Bernstein addresses the myriad questions Americans were asking about Hillary Clinton all the way back then — and questions that most people still seem to be asking today. In addition to mining hundreds of interviews with Clinton’s colleagues and friends, Bernstein also gained access to Clinton campaign records, all of which he used when writing this book. A Woman in Charge offers a unique and comprehensive profile of the professional life (pre-2008) of this tireless leader.

2. Love Her, Love Her Not: The Hillary Paradox edited by Joanne Bamberger

Written from unique and diverse group of (all female) writers of all ages, experiences, and political affiliations, Love Her, Love Her Not explores why Hillary Clinton has proven herself such a polarizing figure in the American political scene — why voters love to love her, and love to hate her, with equal passion. Filled with all the conversations you and your pals have been musing about the entire election season, this book invites you to examine your own thoughts about the woman who may become the next President of the United States.

3. The Secretary: A Journey with Hillary Clinton from Beirut to the Heart of American Power by Kim Ghattas

From 2008 to 2012 BBC foreign correspondent Kim Ghattas wrote from the road with then-Secretary of State Hillary Clinton, interviewing Clinton and her advisers, administration officials, and key political figures in Washington D.C. and overseas. Offering readers not only a first-hand account of what it was like to witness Clinton deal with everything from Arab Spring to WikiLeaks to the war in Libya, The Secretary also explores how powerful a figure like Hillary Clinton really is, and how powerful America really is on a global scale.

OK, so I know I said the books on this list remain pretty neutral, and by the sheer nature of Hillary Rodham Clinton being Hillary Rodham Clinton, this book is going to have some bias. But we live in a country where women are allowed to speak for ourselves, so it’s only fair that one of Clinton’s own books be included on this list (and in my personal opinion Living History is a lot more digestible than Hard Choices.) Living History is Clinton’s memoir from her childhood through her days as First Lady — the social and political upheaval of her coming-of-age years, her student activism, and her own emergence into politics. And love her or hate her, it's fascinating.

5. HRC: State Secrets and the Rebirth of Hillary Clinton by Jonathan Allen and Amie Parnes

Written by Politico’s Jonathan Allen and The Hill’s Amie Parnes, HRC takes readers behind the scenes of the pivotal days in 2008 after Hillary Clinton lost the Democratic nomination to Barack Obama, and promptly decided to endorse her former opponent, before joining his administration. With an in-depth look into the war against Libya, and the 2012 Benghazi attack — as well as a lot of other critical moments in Clinton’s recent political career, this book will give you that in-depth look at the last 8 years of Clinton that you’ll want to brush up on before heading to the polls in November.

6. Hillary Rodham Clinton: Some Girls Are Born to Lead by Michelle Markel

Yes, this is a children’s book — but children’s books tend to get down to what’s essential about a story, so for some added perspective I’ve thrown it in here. Some Girls Are Born to Lead demonstrates the stereotypes Clinton had to face and overcome — growing up in 1950s and 60s when women couldn’t have both careers and children; being strong, smart, and outspoken in an American that encouraged women to be accommodating and demure. No matter who you’ve voting for in November, there’s no doubt that her story is empowering.

7. Her Way: The Hopes and Ambitions of Hillary Rodham Clinton by Jeff Gerth and Don Van Natta Jr.

Pulitzer Prize-winning New York Times reporters Jeff Gerth and Don Van Natta blend the personal with the political in this biography of Hillary Clinton. A potential companion read to Living History (because Gerth and Van Natta make a point of fact-checking a lot of Clinton’s own memoir) Her Way was published before Barack Obama became the 2008 Democratic nominee, and does seem to assume that Clinton would win the 2008 presidency. An interesting glimpse into the trajectory of Clinton’s political life.

8. Hillary Rising: The Politics, Persona and Policies of a New American Dynasty by James D. Boys

An exploration into the core principles of Hillary Clinton’s political ideology, Hillary Rising: The Politics, Persona and Policies of a New American Dynasty traces Clinton’s life in politics from the political activism of her adolescence to her experiences as First Lady, New York senator, Secretary of State under Barack Obama, and two-time presidential candidate. This is a must-read for anyone interested in the complex, compelling, and inspiring trajectory of this fascinating politician’s career.