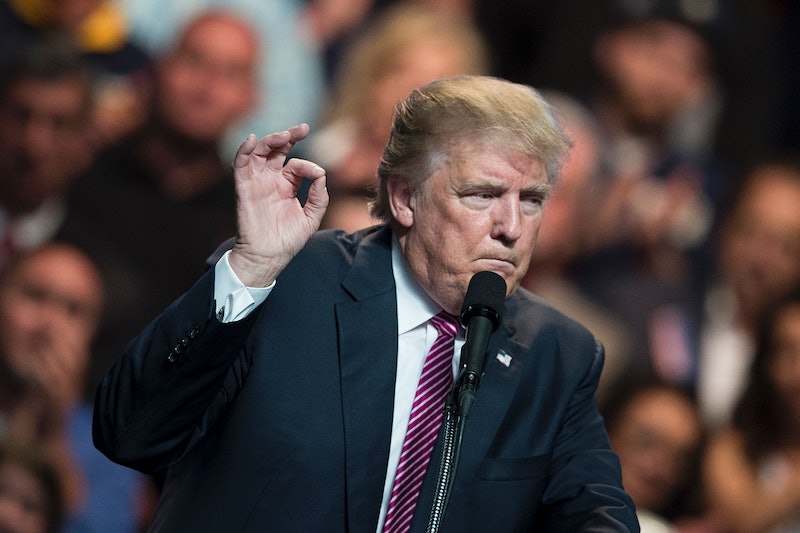 In the tradition of ancient Greek poets, writers often employ epithets to really drive home certain elements of their characters. Epithets help us keep the characters straight when a story has a lot of them by sparing us from having to form any actual conclusion about what they're like on our own. Why wrestle with the nuance of someone’s persona when some epic poet can cut to the chase and tell us what really matters? No need for independent thought when someone has done it for us. "Crooked Hillary." "Lyin’ Ted." Now Donald Trump has crowned Bernie Sanders "Crazy Bernie."

Truly, the presumptive Republican presidential nominee is the epic poet of our time.

It’s as good an epithet as any of the ones Trump has bestowed on his rivals, because it cuts straight to a reductive version of what people mock and fear about him. To those who aren't feeling the Bern — or more accurately, fear the Bern — Sanders appears to be some disheveled old guy yelling about stuff. Trump calling him "Crazy Bernie" hits on the worst perceptions of the Vermont senator in a big way.

But it also sort of weirdly reveals just how infatuated Trump has become with his ability to churn out these monikers, like a new toy that he can’t stop playing with for the life of him. It makes sense, for instance, for Trump to be hammering in the Crooked Hillary angle at this juncture. But strategically, this is really the moment when he should be courting Sanders’ fans, not alienating them.

In fact, he was doing just that, seeming to offer comfort and open his arms to legions of crushed and vulnerable Clinton-hating liberals — until, it would seem, the moment “Crazy Bernie” occurred to him and it was just too good not to tweet. Efforts to woo Berners with talk of possibly raising the federal minimum wage (but not really) or proclaiming that the system is rigged against Sanders were suddenly sabotaged by The Donald himself. Trump’s motives are not always what we would call clear, but it’s times like this that he comes to us in refreshing transparency. I imagine that this must be how his brain works: Thought of insult. Must tweet. Fact that it flies slightly in the face of previous strategy irrelevant. Must tweet.

There are, like, a million Crooked Hillary utterances (plus half a dozen Goofy Elizabeth Warrens) in Trump's last week or so, but it was only five days ago that he was staying the course with tweets like these:

It was a simpler time, before his muse apparently came to him, when Bernie was just Bernie. Maybe this will have a deterrent effect on Sanders supporters who contemplated limping into the warmth of Trump’s short-fingered embrace? Perhaps, but I doubt Trump is concerned. Part of the reason he doesn’t care about undermining his strategy with whatever insult comes to mind is that he doesn’t need to. When has what he’s said ever hurt him?

More like this
'The Undeclared War' Took Inspiration From This Gavin & Stacey Location
By Maxine Harrison
How To Support Gun Control Reform Right Now
By Morgan Brinlee and Carolyn Steber
How To Fight For Reproductive Rights, Based On How Much Time You Have
By Courtney Young
How 5 People Upended Their Lives To Fight For Abortion Rights
By Hannah Smothers
Get Even More From Bustle — Sign Up For The Newsletter