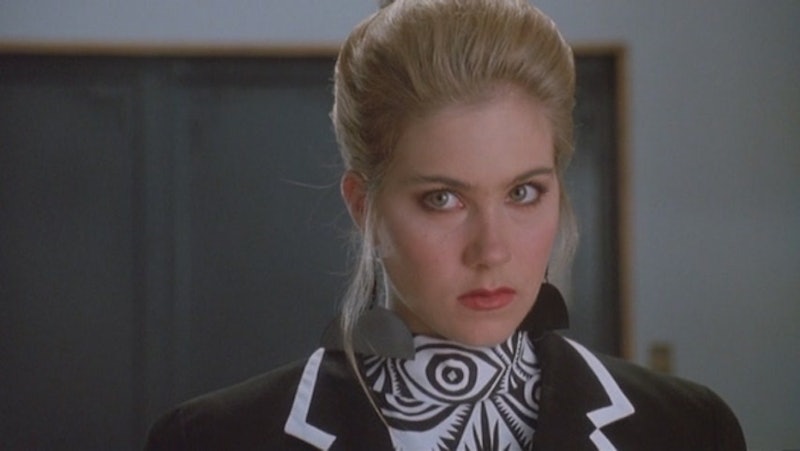 I don't want to tell you your business or anything, but I'm pretty sure there's a '90s teen movie that doesn't get enough love: Don't Tell Mom The Babysitter's Dead. Maybe you do remember it, and you're right on top of celebrating it and its relevance, but I have a sneaking suspicion that it's fallen out of your brain like it has for so many people. I'm taking it on as my patriotic duty today to shove it back in. I feel like I always hear people talking about '90s teen movies like 10 Things I Hate About You and She's All That and even Drive Me Crazy, harkening back to a simpler time when the most popular guy in high school could sweep into your life and change it completely. Meanwhile, Don't Tell Mom The Babysitter's Dead gets sadly neglected. Which is crazy, because there are some genuinely really important messages in it that we can learn from it.

And not just our teen selves, but our now selves, too. Rarely does nostalgia come so readily packaged in practicality. In case you aren't familiar, Don't Tell Mom The Babysitter Is Dead was released in 1991 and stars Christina Applegate as Sue Ellen, the oldest of five children whose babysitter dies — she was old, no foul play — when their mom goes out of town on a three-month vacation to Australia.

As you can probably guess from the title, instead of alerting their mom to the issue and having her rush home to take care of her kids, they... y'know... don't tell mom the babysitter is dead. Instead, Sue Ellen, only a teenager herself, gets a job at a fashion company in order to support her younger siblings, and the hijinks ensue.

It's like a combination of the movies Big and 13 Going On 30, with the camp of 9 To 5, but it also has some life lessons in there. Because Sue Ellen — or "Swell," as she is called in the film — actually works hard to be good at her job, and figures out how to work the system in a way that's helpful for me in my real life. For example, Swell is encouraged by a coworker never to seem like she doesn't know what she's doing, so, whenever her boss Rose, played by Joanna Cassidy, asks her to do something, instead of panicking, she's just supposed to say calmly back, "I'm right on top of that, Rose!" Even if she is in no way on top of that, Rose.

I'm not exaggerating when I say I either use or think that line multiple times a week. It's like the '90s teen movie version of "fake it 'til you make it," and I want everyone to get on board with using it, because it's genius.

Basically, Swell has to figure out how to be an adult, and take responsibility for herself and her younger brothers and sisters, and do it all without falling back on excuses. I hope I'm not the only person who genuinely needs this information in order to live. So, the next time you're finding yourself failing hard at adulting, pop a VHS of Don't Tell Mom The Babysitter's Dead into the VCR that I'm sure we all still own somewhere, and get to reminiscing about this piece of forgotten art. Your other '90s faves could never.