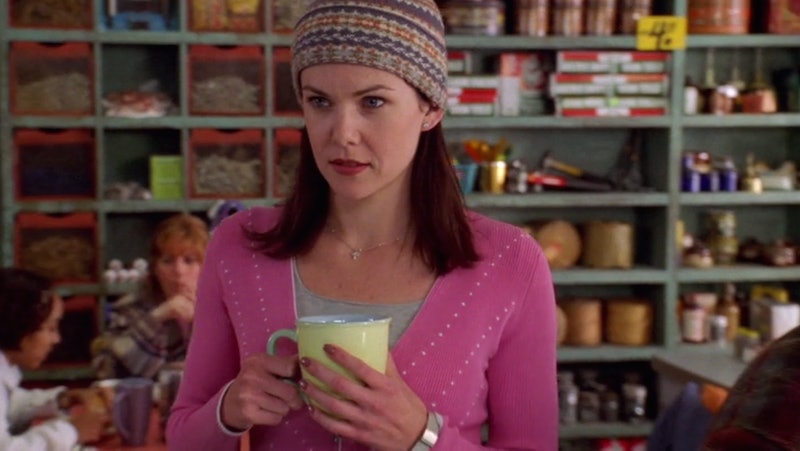 An excess of caffeine isn't actually a joke. Much as Lorelai from Gilmore Girls appeared to exist on a constant rattling drip-feed of coffee just to function, too much of the good stuff (which, I need to remind you, is present in green tea, some breakfast cereals and chocolate, as well as your friendly neighborhood latte) is going to do you real harm. That doesn't seem to be deterring most of us: in 2006, a study showed that American college campuses appeared to be undergoing an epidemic of caffeine pill abuse cases. Caffeine overdose is a real thing and can cause some quite serious damage. Luckily, if you've been overdoing it on the coffee without quite realizing it, your body will be giving you definitive signs that you're ingesting too much caffeine.

Caffeine's negative interactions with the body in high doses come down to its operation as a stimulant. (Although you can feel dependent on it, incidentally, caffeine "addiction" doesn't necessarily exist in the same way that alcohol or drug addiction does.) The Mayo Clinic classifies 250mg-400mg of caffeine per day (two to four cups) as a high dosage, and over 500-600mg as excessive or possibly harmful. If you rise above this level, you may encounter some serious difficulties.

Severe caffeine overdose can cause death, but that's very rare and actually takes a bit of effort; a young Japanese man made the news in 2015 for dying of accidental caffeine intoxication, partially because it was the first the country had ever recorded. Before you get to that level, though, things can get very uncomfortable. So if you've been hitting the espresso hard lately and feeling any of these symptoms, now is a good time to cut back.

1. You Get Heart Palpitations

The impact of normal amounts of caffeine on the heart has been scientifically debated, but when it comes to excessive levels, cardiovascular health starts to suffer. Like any stimulant, caffeine in high doses is linked to a high heart rate, as the body reacts to the drug by effectively going into overdrive. Palpitations are the sensation that your heart is beating in an unnatural way, particularly too hard, fast, or out of a correct rhythm. Guidelines for caffeine overdoses for medical professionals include the likelihood of arrhythmia (the heart's beats dropping out of a regular sequence), chest pain, or tachycardia, the technical term for a very quick heart rate.

This is an interesting one: caffeine has actually produced conflicting results when it comes to its impact on blood flow through the body, but a 2009 study revealed that frequent coffee drinkers had less blood flow to their brains than non-users. Make this an extreme situation, and dizziness is likely to result: as the blood supply to the brain dwindles, the possibility of vertigo and a lack of balance rises substantially. It's also been suggested that excess caffeine consumption may create difficulties with blood sugar, which is another possible route to feeling faint in the supermarket.

3. You Have Chronic Insomnia

As a symptom this may seem faintly obvious, but you'd be surprised. For one, the life of caffeine in the body is longer than you may think; after eight to 10 hours, according to WebMD, only 75 percent of it has been processed by the liver. This means that a little caffeine in the morning may not stimulate you at night, but that too much will take a very long time to break down in the body, preventing a proper sleep cycle. Serious sleep disruption and insomnia have been associated with just drinking coffee at the wrong point in the day (i.e. late in the afternoon), according to the National Sleep Foundation, and overdosing will just exacerbate the impact, keeping your nervous system on alert far beyond its sleep time.

In this sense, caffeine in high doses has quite a lot in common with Adderall, the stimulant prescription drug: too much of it can cause excessive sweats, as if you've just run a marathon. To understand this, you need to get to grips with the actions of stimulants in the system. Caffeine is classed as a methylxanthine, a neuro-stimulant that provokes the body into heightened levels of awareness, sensitivity, and arousal, meaning essentially that all systems are on alert. Hence the sweating. The perspiration is only made worse if you have a tendency for anxiety, which may be exacerbated by too much caffeine and creates a fight-or-flight adrenal response in the body that also increases sweating.

Technically, heartburn is a misnomer; it's not the heart that's actually suffering the pain here, it's the esophagus, which gets burned when stomach acid finds its way upwards onto its lining. And caffeine, even in normal doses, has been linked to an increased likelihood of what is, essentially, gastric acid splash back. Excess caffeine, according to the gastroenterologist Kevin Ghassem, causes a relaxing effect on the sphincter, or ring of muscle, that's meant to close off the stomach from the oesophagus. It opens, creating the possibility of burning, and it's extremely unpleasant for basically anybody.

The most radically obvious symptom of caffeine overdose will likely be related to caffeine's laxative effects. According to the Washington Post 's summary of this particular superpower, we know the physical mechanism that will create such discomfort in over-dosers, but not entirely what stimulates it. Caffeine basically stimulates the lowest bit of the colon, the last part of the digestive system, pushing waste out of the body, and it's suspected that this may be a result of acidity in coffee itself, but we're not entirely sure. Regardless, Medsafe classifies diarrhea as one of the most prominent symptoms of a severe caffeine issue.

Muscle twitches, known technically as fasciculations, are the sort of things that make you look decidedly unnerving to other passengers on your train. And it turns out that caffeine overdose is particularly likely to cause them, because of excess stimulation and an amped-up nervous system. The stimulants in caffeine can, in high amounts, cause small involuntary tensions of muscle fibers across the body, though this isn't universal and can start happening at quite low caffeine levels in certain people. Remember that fasciculations aren't a giant twinge or cramp in your bicep; they're individual muscle fibers, and will likely show up as a very small shiver or tic, anywhere from your eyelid to your calf.