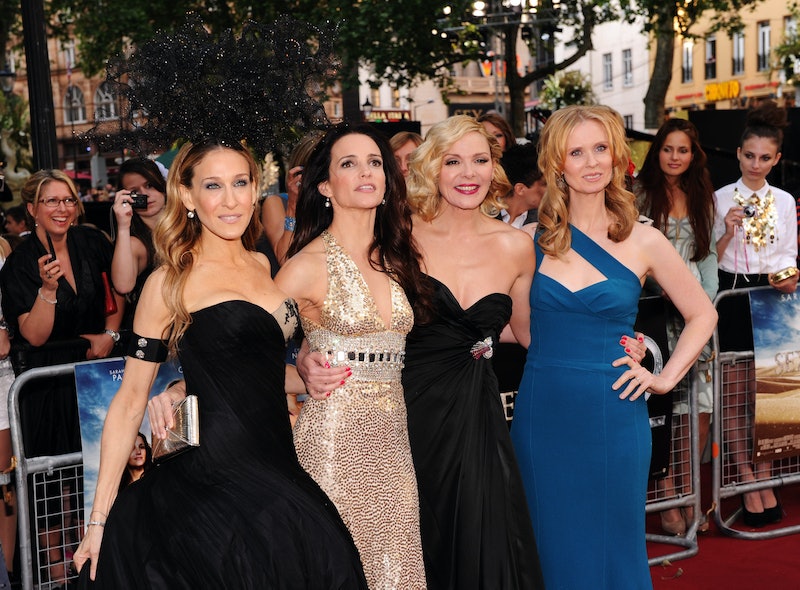 Calling all Sex and the City lovahs: Carrie Bradshaw might take one last walk in Manolo's on the big screen. The writer and director of the series and the show's two films, Michael Patrick King, believes there is more Sex and the City story to tell about the four shoe—and love—obsessed fashionistas of HBO. But, will those ideas ever come to fruition? That's an entirely different feat.

“Sarah Jessica and I both know what that final chapter is. That doesn’t mean it will or should be told, but I do think there’s one story left. Whether it ever happens is a whole other situation. But there’s four girls, and those girls are still in my mind," King told Entertainment Weekly.

His comments regarding the show's future come as a response to Sarah Jessica Parker's comments to InStyle magazine back in January, when she agreed that there was still more in store for the dynamic four.

"A part of me thinks there is one last chapter to tell," Parker told InStyle. "But timing is a peculiar thing. It isn’t a decision that can wait forever. I don’t want to have to wear muumuus!"

Trust, SJP, we don't want to watch you wear a muumuu either—unless it's bejeweled in diamonds with a pair of Manolo's fresh off the fall runway. Plus, who is she even kidding? Parker will be skipping into her 90s with biceps that rival the most accomplished athletes, so she'll have no need for a muumuu anyway.Getting back to the third film dilemma, a devout Sex and the City fan myself, I will admit the idea of another film sounds like the ultimate dream for any religious fan of the show—especially after the less-than-thrilling train wreck that was Sex and the City 2. However, currently, that's all it is—just a dream. There are no confirmations of any scripts or rehearsals or castings. Parker even told Wendy Williams earlier this month that while she knows what the story would be for a third film, she can't know for sure that it will ever happen. While we'd love to see what the SATC creators could cook up for the ultimate finale to this pop culture phenomenon, we're not quite sure what there is actually left to see.King and Parker both spoke of a "final chapter," but we don't know what they could be referring to. We've journeyed with these four ladies through six seasons and two movies of friendship, single life, countless boyfriends (and a girlfriend!), one night stands, engagements, break-ups, make-ups, infidelity, marriage, child birth, adoption, a miscarriage, cancer, full-fledged careers, and death. Seriously—what else is left?The last time we saw the women in the second film, they were settled and successful. They were also in their 40s and 50s with accomplished careers, children, and marriages. Aside from watching them age, nurture their growing children, or die, there really is nothing left to actually see. The second film already fell into this trap when it spent 2+ hours showing the ladies complain about the regularities of married life and raising children. While those are relatable and warranted struggles for women everywhere, they're rather boring to watch unfold on camera. Carrie Bradshaw will never have children and Samantha Jones will never get married—over a decade of episodes and films proves this much. The only logistical elements of their lives that are left to explore are retirement, divorce, and death. I can think of far more entertaining things to watch. People love this show and these characters so much that they want to see a third film just to satisfy their nostalgia, but much like shoes, you should never overwear a great pair—or they will just fall apart.