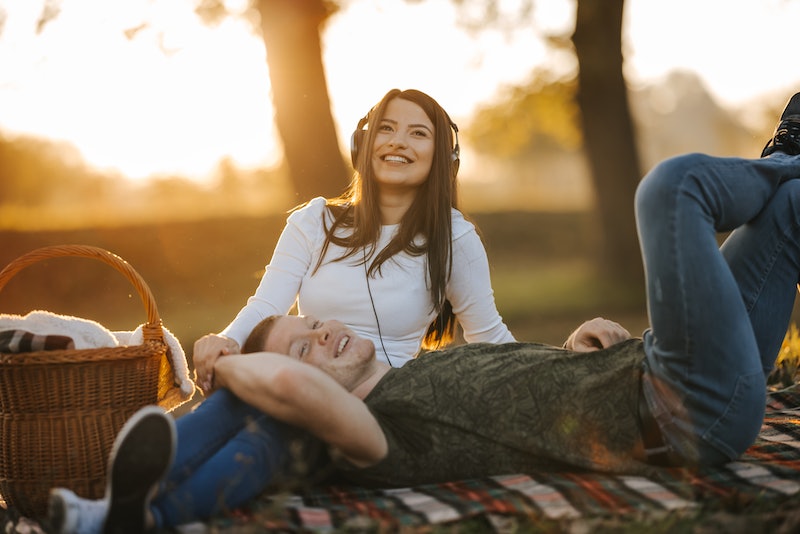 If you've got a long-term boo (I refuse to use the word "bae"), how much time should you spend together to cement the relationship ... without wanting to kill them? It's an issue that goes through several stages in serious relationships, from the spending-every-waking-moment-together phase to the wanting-air phase. And it gets into another dimension if you live together; does coming home to the same bed every night mean you should book more time away from one another in the daytime? What's psychologically healthy, and serves both your love for intimacy and your personal requirement for autonomy? The answer is individual, but science can actually give us some pretty good general pointers.

My mother-in-law, who's trained as a relationship counsellor (which is actually awesome), has always been a proponent of what's called "the closeness-distance dance," or the "dance of intimacy," in long-term relationships and marriages. The theory goes that two humans in an intimate relationship will always go through natural phases where they drift slightly together and slightly apart; it's when things get extreme or seriously fail to match up that it should be a concern. Romantic partnerships are always about pursuing a balance between the personal and the mutual, but the current state of psychological science indicates that balance needs to be pretty evenly split, for everybody's sake.

Let's take a look at some of the scientific pointers on where to direct your energy in a relationship, why, and how — because just "spending time" with a partner may not be as simple as you think.

1. In a Happy Relationship, Shared Time Is Happy Time

You may be pleased to discover that, if you're in a pretty cool relationship (or a very long-lasting one), you get an automatic boost to your happiness levels just from being around your partner. That's the conclusion of a study released in February 2016 by the University of Minnesota, which examined 47,000 couples over seven years, looking at how they spent their time and how it affected their general happiness. (The couples were all married, but that was the only common factor among them.) The researchers found something kind of charming: on average, when somebody's with their spouse, they're twice as happy as they are without them, and rate their activities as more meaningful. Togetherness time, it seems, matters to your overall mental health if you're with somebody you love.

This is a total scientific debunking of the concept of "absence makes the heart grow fonder". Sure, if you've been apart for a while you and your partner will likely want to tear each others' clothes off as a matter of priority, but it turns out that the more time is spent together in general, the more often a couple has sex.

The now-famous study, conducted by Dr. Denise Donnelly and published in The Journal Of Sex Research, looked at 6,029 married couples and found that they were far less likely to have sex if they were unhappy, had small children, or just didn't spend much time together. Familiarity doesn't breed contempt: you need a bit of time in each other's space to keep the attraction. But what does "time together" actually mean?

3. Time Together Needs To Be Communicative

"Spending time together" needs to be something more substantial than just sitting in the same room working on separate projects — at least some of the time. The scientific evidence for meaningful relationship time, or at least what we perceive as meaningful, is strong: a collaboration between Brigham Young University and Colorado State University found that women in particular prioritized time together as a mark of a successful relationship, but the researchers also found that their subjects were very clear on what kind of time they required. It needed to be communicative: in other words, talking to each other, not necessarily about emotions but about an activity, work, gossip, jokes, or completely trivial subjects. (Gossip in particular is a human bonding exercise; we become close to strangers more quickly if we're talking about a third person with them.)

For men, having male friendships may be crucial to lowering stress levels and improving their happiness. Researchers at the University of Gottingen looked at macaque monkeys' stress hormones, and found that the males were most stressed with family or partners, and relaxed while with their male mates. It's not entirely clear whether this applies properly to humans, as we have very different social arrangements to macaques, but there may be certain primate elements in male bonding that mean time away from a female partner is necessary for a bit.

Women's friendships outside of their relationship, meanwhile, in particular with other women, seem to be important to stress levels as well, but in a different way. Scientists have now discovered that human females react differently to males when it comes to stressful events: while men use "fight or flight" (get aggressive or avoid the situation), women tend to use their social bonds with other females to support themselves. This means that time spent building same-sex friendships outside of a romantic partnership is likely a necessity for good stability and effective coping mechanisms.

Nobody seems to have done studies on same-sex couples and whether the same-gender situation at all mediates the need for outside same-sex friendships, so someone should get on that.

Science has discovered an interesting variety of ways in which relationships can reach peak happiness, and when it comes to friendship and hobbies, that actually gets quite complex: mutual meaningful activities are necessary, but mutual friends aren't as important as they might seem.

The thing about friendships in the age of social media is that they're actually quite easy to track, and that's what a seriously groundbreaking study of Facebook and relationships did back in 2013, with interesting ramifications for happy couples in the process. The scientists behind it found that mutual friends weren't the biggest indicator that a couple were a long-term item; the real sign was something called "dispersion," where their mutual friends also had connections with one another, and their mutual friends had connections, and so on. And they discovered something very interesting: if couples had friends and social networks that overlapped with "dispersion," they were much less likely to break up than couples whose social networks weren't intertwined at all. In other words, it's not all about mutual friends; it's about intermingling the various spheres of your lives and watching new connections spark off.

Meanwhile, a 2004 study of married couples found that effective companionship wasn't just about staying together: it was about doing stuff together. "Pursuing leisure activities" that suited both partners, in other words, was the stuff that made a relationship happy and solid. If you and your partner share at least a few hobbies, you're more likely to be close than if all your pleasures are of different kinds. A good demonstration of this is gaming: it's commonly acknowledged in the gaming community that only one partner being into gaming can cause friction in a relationship, and it's generally believed to be much better for couples to do it together, actively.

To make the alone-together balance work, prioritize outside friendships, make time together count with lots of communication, and look for ways to involve one another in hobbies, because carving space for yourself will be a lot easier if you're confident in the relationship's stability.

More like this
Are Gemini & Leo Compatible In A Relationship?
By Kristine Fellizar
So, How Soon Is Too Soon To Move In Together?
By Jessica Estrada
GIRLI & Q Fell In Love At A Skatepark & Never Looked Back
By Jessica Morgan
TikTok’s Viral “Rating Game” Is Exposing Everyone’s Icks
By Courtney Young
Get Even More From Bustle — Sign Up For The Newsletter