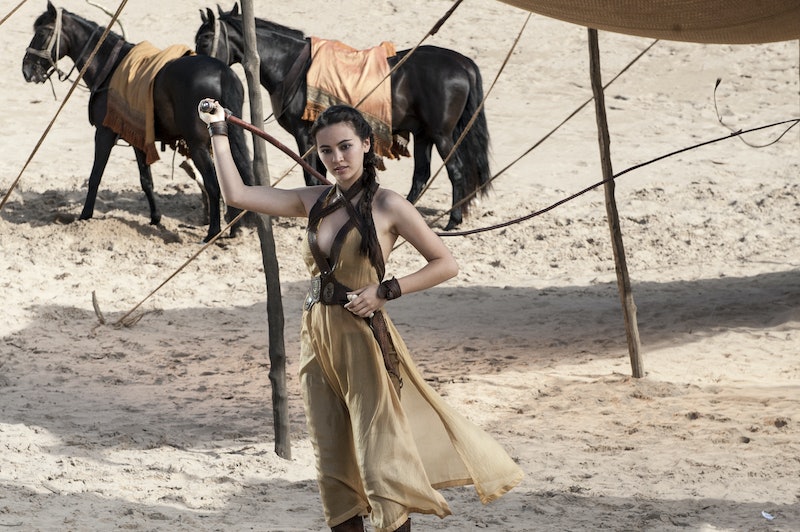 George R.R. Martin just released a new excerpt from The Winds of Winter , and (spoilers ahead!) the military implications are huge. Told from the point-of-view of Princess Arianne Martell, heir to the Dornish throne, we follow the princess as she (along with her cousins, the Sand Snakes) makes her way to meet with Jon Connington and Prince Aegon, AKA Young Griff. What Arianne learns of their military progress shows that Prince Aegon has become a formidable force in the war for the Iron Throne.

As readers of A Song Of Ice And Fire will remember, Prince Aegon is the long-lost son of Prince Rhaegar Targaryen and Elia of Dorne, meaning that not only does he have a strong legal claim to the Iron Throne, but he also has a strong blood-tie to the Dornish throne. Currently, he is in command of the Golden Company, a strong army of sellswords. The possible alliance between Prince Aegon's forces and Dorne is extremely compelling, and it seems like Arianne is certainly interested in a deal. Both Prince Aegon and the Dornish characters are often pushed aside by ASOIAF fans, with the more popular theories placing either Jon Snow, Sansa Stark, or Daenerys Targaryen as the ultimate winner of the Iron Throne. But the combined forces of the Golden Company and Dorne would be a huge threat to King's Landing and anyone else who wants the throne for themselves.

And even more striking, we also hear that Prince Aegon's forces have successfully taken hold of Storm's End, a Baratheon stronghold that is supposedly one of the hardest castles to conquer. However, there is some speculation about whether this news is indeed true and, if it is, if Prince Aegon will be able to hold it against Mace Tyrell's approaching siege. Being able to claim Storm's End would say a lot about Prince Aegon's power. He is not just a distraction; he is turning into a bona fida force to be reckoned with. Could Prince Aegon, in fact, be the new player in town that stirs everything up? I don't know about you, but I certainly want him to be.

In this excerpt, we also see the passionate antics of teenager Elia Sand, the bastard daughter of crowd favorite Oberyn Martell. There is some speculation that Elia's rebelliousness in this excerpt could spell trouble, or it could hint at a future romance between Elia and Prince Aegon, further cementing an alliance. Whatever happens, you can't overlook the strength and influence of the Dornish women. If Arianne gets what she wants, perhaps it will be Dorne that comes out ahead.

More like this
16 Novels That Paint A Realistic Portrait Of Abortion
By K.W. Colyard
Sparks Fly Fast & Furious In 'Honey & Spice'
By Bolu Babalola
At 14, Jenny Han Wrote Rom-Coms About Her Friends & Fan Mail To Leo DiCaprio
By Alyssa Lapid
Emilia Clarke Shares More Details About The New 'Game Of Thrones' Series
By Maxine Harrison
Get Even More From Bustle — Sign Up For The Newsletter