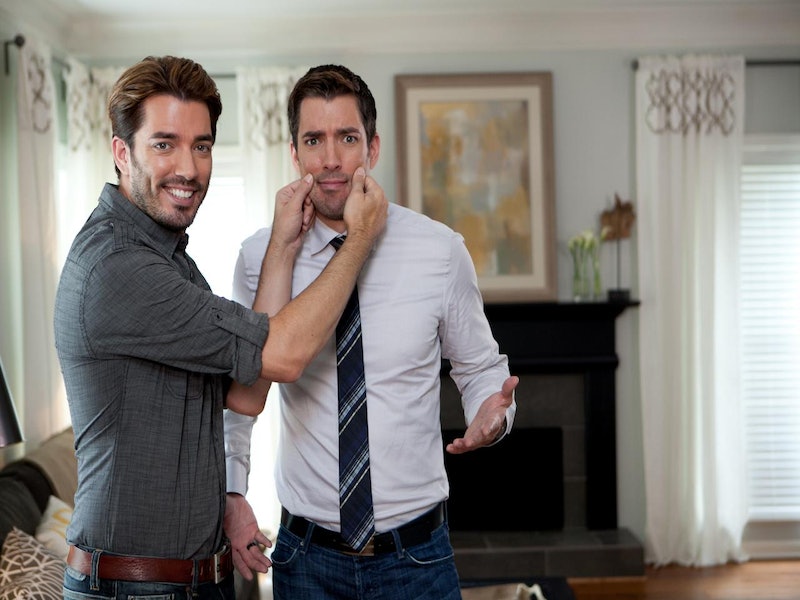 Siblings — can’t live with 'em, can’t live without 'em. That’s just one of many lessons that Jonathan and Drew Scott of Brother Vs. Brother, a spin-off of HGTV's Property Brothers, have taught us sisters, brothers, and only children of the world. Plus, highlights are a great way to differentiate yourself from your twin (<3 you, Jonathan).

We're used to this odd couple joining forces to fix up and sell homes and engaging in general monkeyshines on Property Brothers. But their other series Brother Vs. Brother brings something even more fun to the forefront: their twin-like enthusiasm for one-upping each other.

On the show, the handyman/designer brother (Jonathan) faces off against the business-minded realtor brother (Drew) in an adrenaline-pumping, house-flipping competition, all aimed at determining who the better brother is. The prize for winning? Bragging rights, and a donation to the charity of their choice. And the price for losing — swallowing their pride, and doing a dare that they will never live down in a million years.

With the premiere of Season 4 just around the corner, we’ve teamed up with HGTV's Brother Vs. Brother to lovingly look back on what the fraternal shenanigans of Drew and Jonathan have taught us. At the very least, you'll have a couple good practical jokes for your prank bank. Make sure to catch the Season 4 premiere of Brother Vs. Brother on June 1, 9p/ 8c on HGTV.

1. Heavy Is The Head That Wears The Crown

With great fairy princess power comes great responsibility. That's what brother Drew learned when he lost the Season 3 living room flip challenge to Jonathan. For his losing dare, Drew paraded down Las Vegas' Sunset Strip in what we can only guess is a Glinda costume. But instead of protesting, he took it in stride and strutted his stuff like a queen.

In a delightful bit of fan service, the Season 3 kitchen challenge saw one of the brothers stripping down to his birthday suit in a sold out, all-male dance revue. With Drew as the winner for this one, Jonathan bravely went for the full monty. He isn't exactly a professional, but he sure has the "Achy Breaky Heart" side-step down pat.

3. Sometimes, You Just Have To Leave Things To Chance

The Season 3 bedroom and bathroom challenge game was so tight, it left judges Hillary Farr and David Visentin (Love it or List It) in a deadlock. They resorted to a nail-biting game of rock, paper, scissors to call it, and in the end? Drew came out on top once again. It was the only fair way to call it.

4. Don't Be Afraid To Take The Heat

With Drew winning by paper-covers-rock, that fateful bed and bath challenge tie-breaker left Jonathan to perform the dare of getting a hot sauce shower. At the very least, it's a great way to clear your sinuses.

As far as we can tell from watching Jonathan take a sledgehammer to a wall, breaking stuff is just plain fun. Even Drew can get into it — that is, when he imagines that the tile he's smashing is his brother.

6. Teamwork Is Sweet, But Winning Is Sweeter

After two seasons of losing to Drew, Jonathan emerged victorious in Season 3 after his house sold for a larger profit margin than his brother's. And as we see, the bragging rights are worth it. He cries in victory, "Working man hands won this competition!" Hey! A little bit of lighthearted gloating never hurt anyone.

Just like we see with Jonathan and Drew, competition can get pretty fierce between people who shared the same womb. And though your blood brother or sister may routinely drive you insane, you love them and wouldn't trade 'em for the world.

This post was sponsored by HGTV's Brother Vs. Brother, Season 4 premiering on June 1st, 9p/ 8c.