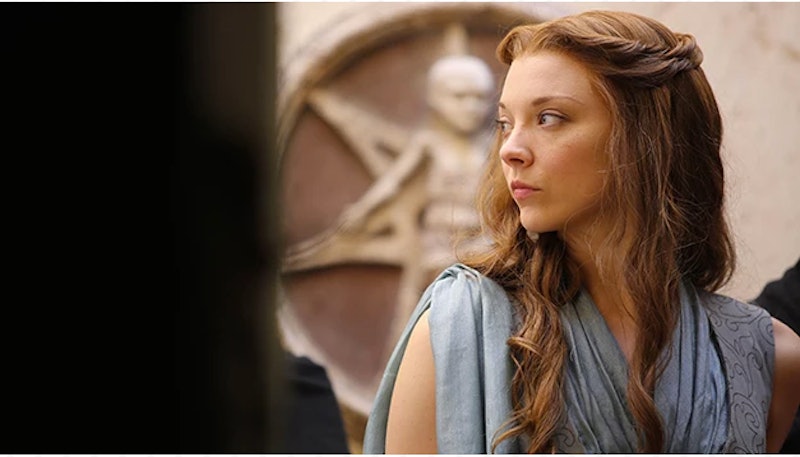 So far, it’s been a pretty Tyrell-less season on Game Of Thrones. But with Margaery and Loras in jail, the Tyrell family finally gathered on-screen in Episode 3 of Season 6, including their father Mace and grandmother Olenna, and when the Lannisters arrived, things got snippy. It’s only a matter of time before these two powerful families finally come to blows. Based on spoilers from the set and the trailer for Episode 4, the Tyrells might fight the Lannisters on Game of Thrones .

In September, I previously reported in a Bustle piece that onlookers in Girona, Spain took to the Internet, posting potential spoilers from the Game Of Thrones set. I explained that fans were posting pictures of extras marching beneath Tyrell banners. I went on to speculate about why Tyrell troops would have potentially assembled. Could the show be following the arc of the book series? A Dance with Dragons leaves off with Margaery and Loras basically in the same position as they are in now on the show. However, in the latest book, Mace (who was present at the table in Episode 3) will not remove his army until his daughter is acquitted.

But, it’s easy to understand why the Tyrells would have had enough with the Lannisters at this point, cue Twisted Sister’s “We’re Not Gonna Take It.” When it comes to their relationship with the Lannisters, the Tyrells give and they give and they give. Margaery was married off to Joffrey, then Tommen. And, Loras was similarly betrothed to Cersei. The actor who plays Loras, Finn Jones, teased that his character will get a little darker this season, during an interview with the UK site Express, where he called the transformation “shocking.” He said:

I was a little bit nervous when I got the scripts through, but I’ve started filming now and so the nerves aren’t there anymore. So I know what’s happening, a lot of good stuff to do this year. Game of Thrones is always shocking, so it’s never going to stop shocking people ... the end of season six in particular is very shocking … There’s a transformation in Loras’ state and character, and it’s fun to be able to go a little bit deeper and darker in the character.

Based on the trailer, it seems the Tyrells will go to the Lannisters for help with Margaery’s imprisonment. But, they may eventually need to take matters into their own hands. In the Episode 4 trailer, Cersei says “Margaery will repent her sins before the city." To which Olenna replies, "That cannot happen.” And, Cersei agrees.

So, will the coming episodes feature a shame walk? Another betrayal by the Lannisters? An uprising? We’ll just have to watch and see. And, even if the next episode, or even the one after that, is light on the Tyrell plot, I have a feeling something big is brewing and the Tyrells will make a mark on Game of Thrones Season 6.