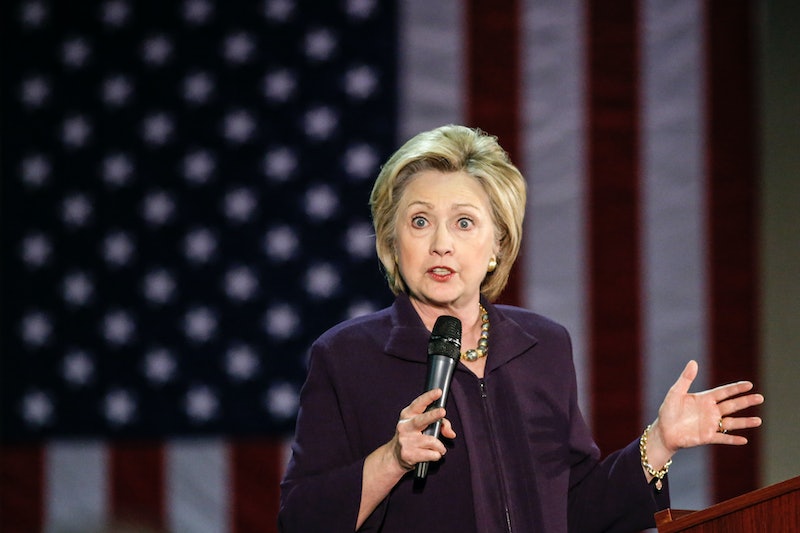 With the presidential primary process winding down on both sides — Donald Trump is now the unopposed presumptive Republican nominee, while Hillary Clinton remains a virtual lock for the Democrats — the vice presidential buzz is heating up. Like, real buzz, over people who could actually conceivably get the job someday, not Ted Cruz's woeful attempt to manufacture it with Carly Fiorina. As such, it's a great time to get answers to some general questions about the VP selection process. For instance: must presidents and vice presidents share a party, or could you theoretically have a bipartisan ticket?

The answer is pretty simple: no, there's no requirement that a presidential candidate must pick a VP from their own party. But that's where the simplicity ends, because, as even the most casual observer of American politics knows, the chances of that actually happening seems more distant now than ever before. Whether or not the American political landscape is truly as partisan and polarized as popularly perceived, it's definitely partisan enough to preclude this from happening.

But it's an idea that has actually happened before, and got floated as recently as 2008. Facing a stiff general election challenge against a certain charismatic senator from Illinois, Republican presidential nominee John McCain was reportedly, for a time, eager to tap former Connecticut senator (and 2000 Democratic vice presidential nominee) Joe Lieberman to be his number two.

Lieberman was a fairly conservative Democrat throughout his tenure in the Senate, and was technically an "independent Democrat" by the time 2008 rolled around (he lost Connecticut's 2006 senate primary, but still won the general election in a third-party run) but he was still caucusing with the party, and there's no doubt how it would've been perceived if he'd been the pick.

The best example of this sort of idea in practice (and a prime example of why it'll probably never gain traction) came in 1864, when President Abraham Lincoln made a radical decision during his reelection campaign — he had his current vice president Hannibal Hamlin resign his post, and he brought Democrat Andrew Johnson onto the ticket.

This rather dramatic attempt at a bipartisan executive branch fell apart almost instantly, however, as Lincoln was assassinated by John Wilkes Booth on April 15, 1865, just 42 days following his second inauguration. Johnson would serve as president until 1869, and would become the first president to ever be impeached, though he avoided being booted from office by just one vote in the Senate.

This is all basically a roundabout way of saying yes, you could have a bipartisan presidential ticket, but it's unclear if there will ever be another time when it makes enough political sense to do so. In this cycle, certainly, there's no reason to expect something like that — Clinton, already smarting from a tougher-than-expected primary race against Vermont Sen. Bernie Sanders, is absolutely not going to pick a Republican running mate.

Trump, on the other hand, is just enough of a wild card that you probably couldn't rule it out entirely. But when it comes down to it, if history is any guide, you'll get the same sort of thing you always get when the tickets are finally announced — a couple of in-party options, hopefully with limited liabilities and unknowns (in other words, not the way John McCain would do it). While it's too early to say right now who Trump and Clinton will pick, that's the safest bet by far.