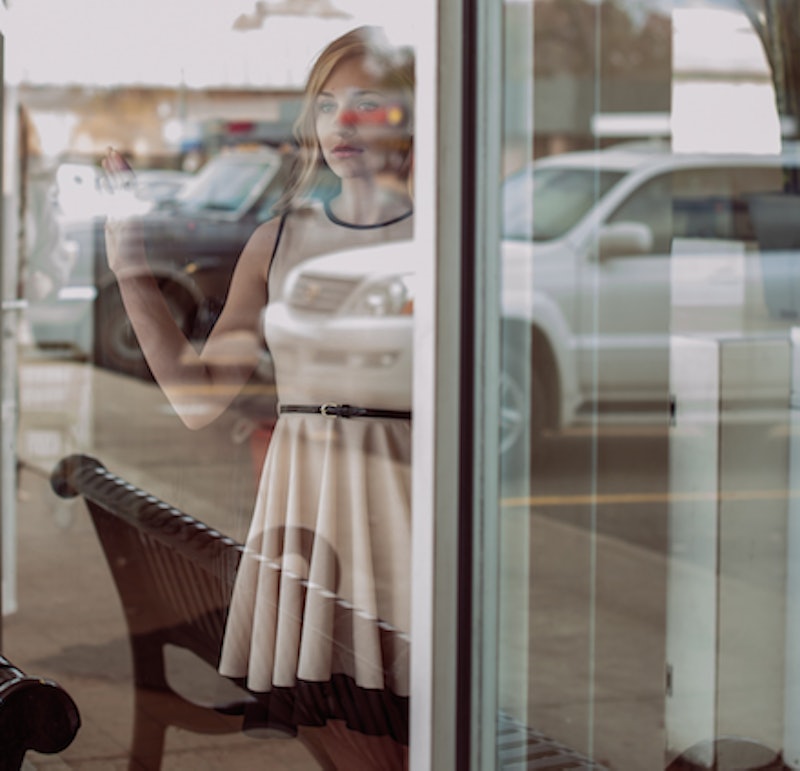 Just because you're shy doesn't mean you're not totally vivacious and charming — it just means people don't often get to see that side of you. But that doesn't always have to be the case. There are plenty of ways to be the life of the party, even when you're feeling shy. A lot of it is about faking it until you make it, and another huge component is just getting yourself in the right mental space.

I've written about the fact that I was a shy kid before — like hide in the corner at birthday parties, not speak for the first six weeks of kindergarden kind of shy. But people who know me today are usually totally shocked to find this out about me. It's not that I stopped being shy — I often feel like at my core I'll always still be that kid on some level — it's just that I learned ways around it, and with time, socializing got easier and easier to do.

The more times I ventured out to a party or networking event and felt like I was talkative and charming, the more confident I became that I could be that way whenever I wanted, and the more I actually ventured out. It was a total positive feedback loop, and it all started with a few tricks to master my shyness.

For those quieter people out there feeling like you have an inner-social butterfly just dying to get out, here are 11 tips for being the life of the party, even when you're shy.

1. Take The Pressure Off

In a piece on how to best socialize at parties on his website, Chris Macleod, author of The Social Skills Guidebook, reminded us to first and foremost take the pressure off ourselves. Remember: it's just a party. You likely won't see the majority of the people there ever again, and most people will be so worried about their own lives and situations that they're not going to notice if you don't wow and dazzle. Instead, just think of it as an opportunity to meet a few people and maybe have a few good conversations.

Macleod also noted that a lot of us go into a party thinking we have to be like the main character in a movie. If we don't totally charm and dazzle, we've somehow failed. However, Macleod noted that the reality is, most people only have a few really good encounters throughout most party-situations, and the rest is all pretty forgettable. So consider it a victory if you show up, have a good conversation or two, and enjoy yourself.

3. Know How You Function

Do you like easing into things, or do you work best when you just jump into it? Knowing this can help you navigate how to approach socializing at a party. Some of us might work better by locating another shy-seeming person and talking with them for a while before moving on to others. Others of us may work best jumping in full speed and introducing ourselves to a group that's already formed, forcing us to dive right in. Try out both and see which one gets you comfortable fastest.

In a piece for Real Simple, Debra Fine author of The Fine Art of Small Talk, recommended thinking of specific things to talk about before going into any social situation. "As I drive to a party, I try to come up with two or three things to talk about in case the conversation runs dry." This can be a life-saver!

Entrepreneur and lifestyle blogger Kevin Kleitches recommended the "compliment and transition" strategy on a piece for The Huffington Post. "The fact is, everyone loves compliments," Kleitches said. He suggested simply saying you like someone's tie or outfit, and then transition into introducing yourself.

A compilation piece for Fobes on how to socialize when you're an introvert noted the importance of embracing small talk. Conversations on the weather, the host's decor, or basic questions about your jobs might seem dull at first, but it's your foot in the door to a much better and more interesting conversation. My personal tip is to try to guide the conversation into more interesting territory right off the bat. If someone tells you they're a lawyer, ask them if they enjoy it, or "What's the best part about your job?" It won't be hard — people generally love talking about themselves.

When I'm at a party and feeling shy, I sometimes try to reframe my perspective and try to focus on others. I'll locate someone who seems like they need someone to talk to and play "host" for a little while. This means asking them questions, making sure they feel comfortable, and generally entertaining them. I find once I've played the role of "confident person" for a few minutes, it starts to come naturally. And who knows, that other shy person just may be the most interesting person in the room!

That same Forbes piece noted the importance of following up one-word answer questions like, "Where are you from?" with more open-ended conversation starters like, "Oh, is that very different from here?" A huge part of being the life of the party is guiding a conversation and keeping it lively and interesting.

In a piece for Cosmopolitan, body language expert Janine Driver stressed the importance of being conscious of your body language and the signal it transmits. If you're standing with your arms crossed across your chest, or with your shoulders hunched, you're giving off a defensive vibe which can make you seem less open and welcoming. She recommended holding a drink in one hand, as it will instantly force you to adopt a more open stance.

She also said not to be afraid of casual touching; "When you're chatting with someone, casually place a hand on his or her arm. Touch triggers good feelings and signals special treatment — so not only will the person you're talking to like you more, other people will wish they were the object of your rapt attention," Driver said.

This tip isn't for everyone, and that's more than OK. But for those of us who enjoy a glass of wine or a beer, I find there's no better time to indulge than a social situation where you're feeling uncomfortable. And I definitely don't mean to go crazy and over-indulge; I just mean I've always found that a single drink can seriously help calm my social jitters. Plus, a necessary drink refill provides a perfect conversation exit strategy when needed.

This final tip is also a personal one that, once I embraced it, was incredibly liberating. If you're worried you're going to be awkward, or that you're going to say something you wish you hadn't, remind yourself that people are pretty self-involved, and you're very likely the only person who noticed or will even remember it happened. So just let go and enjoy yourself!

Don't let shyness prevent you from being the bell of the ball. Use a few of the above tips to help get you out of your shell, and just remember: you're awesome, and have nothing to fear!