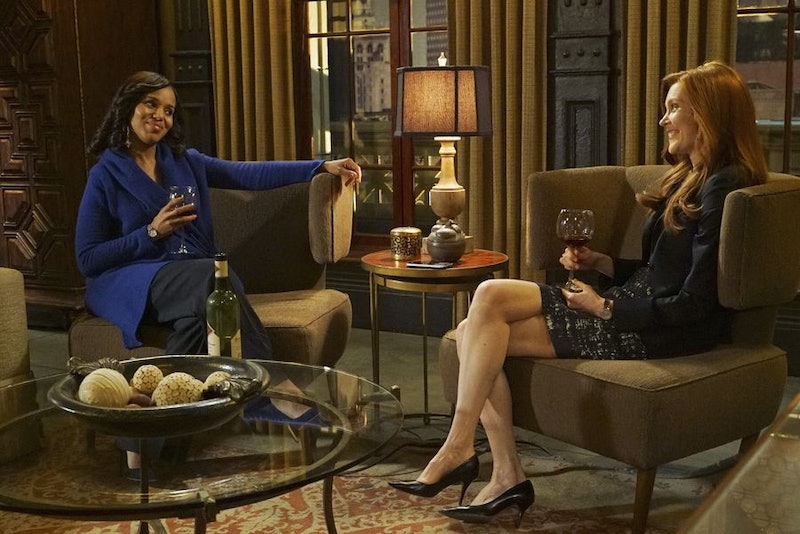 Every year around this time, I get super excited that summer is coming... and then, I remember the dark downside to all of this beautiful weather: The TV hiatuses that are to come. So many of my favorite shows are about to end for the season, and Scandal is no exception. After Thursday's season finale, there will be no new episodes for quite awhile, and knowing Shonda Rhimes, I have a feeling that whatever happens will leave us in some serious suspense until this fall. So, when does Scandal Season 6 premiere? Unfortunately, there's no clear answer to that question.

But there is good news: The show has already been renewed by ABC. Back in March, the network announced that Olivia Pope and co would be back for another season, so all we have to do is wait. That doesn't change the fact that we still have no idea what day to count down to, but we can definitely guess based on past seasons. Typically, Scandal seasons premiere in the end of September, and that means there are at least four months standing between us and the new episodes. It's a long time, but it'll be totally worth the wait. Why?

Here are just a few of the things we have to look forward to in Scandal Season 6:

Now that we know our Scandal presidential candidates are Mellie Grant and Senator Vargas, I'm so ready to see how this election plays out. We've only seen the primaries so far and it's been just about as insane as the real life elections, so I can't wait to see what else is up Campaign Manager Olivia's sleeve.

Or Eli, or Command... whatever we're calling him these days. After she (kind of) ruined Edison's chances at becoming president, Rowan is out for Olivia's blood, and I have a feeling they'll be standing off in yet another showdown. They say you can't take down Command, but I have a feeling you can if you really want to.

Whatever Happens With Jake

Jake is now in a marriage he doesn't want to be in, dealing with Olivia's scary dad. After all his near-death experiences, I feel like next season will be crucial one for Jake. And if not? At least we get to look at him.

For the first time in the show's history, Fitz won't be president — at least, if the show keeps up with the election in real time, anyway, and I predict it will. What will Fitz do? Will he fade into the background? Will he and Olivia get back together and move to that cabin in Vermont? I need to know!

Don't act like they're not your new favorite ship. I didn't see it at first, but after they cheered for Mellie's win together in last week's episode, I'm totally sold. I need to see this relationship happen!

For awhile, it seemed like these two would never return to their days of being gladiating BFFs, but after Abby chose to keep Olivia's abortion to herself, it seems like there's hope for them after all. My fingers are crossed that their friendship is closer to where they used to be in the new season, because after everything Abby's learned in the White House, their powers are unstoppable when combined.

Scandal, bring on Season 6. I'll be waiting with the red wine and popcorn... and a healthy fear that B-613 could be real. See ya then!