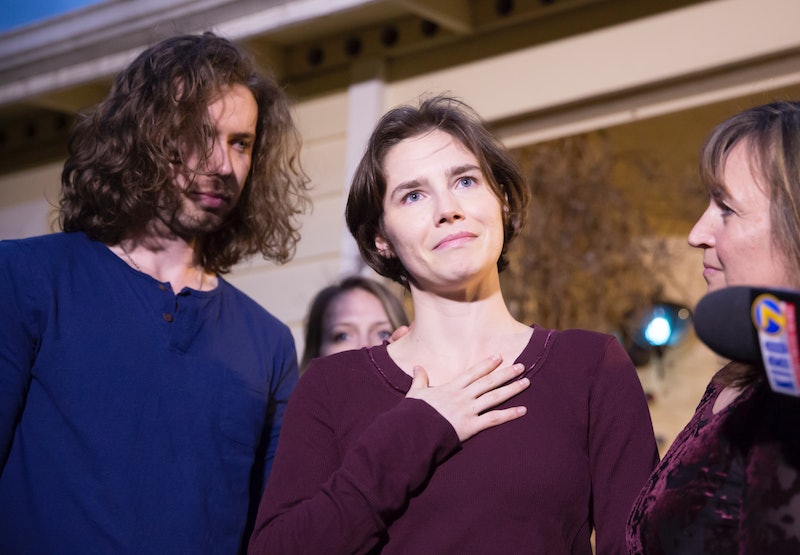 After years in the public eye and being in and out of prison, you have to wonder: What is Amanda Knox doing now? After an incredibly public few years, the West Seattle native has returned to her roots, while staying in the public eye on her terms. After being acquitted of the 2007 murder of her roommate, Meredith Kercher, in May of 2015, Knox has apparently been able to finally begin to move past the events of the past seven-plus years and lead a comparatively notoriety-free existence as a journalist and author.

Knox starting writing for her hometown paper, the family-run West Seattle Herald, in the fall of 2014, when the appeals process was still going on but she'd arrived back in the U.S. She writes human interest stories and covers the arts beat. Knox's editor, Patrick Robinson, told AOL that her involvement with the paper began after she picked up the phone and asked to have the chance to write about the local arts scene. He told the site, "I understand who she is, but it's no big deal."

Robinson reports that Knox's work so far has been "virtually unnoticed" given the level of notoriety surrounding her trial, but that the bulk of responses have been generally positive. Apparently, she has particularly enjoyed chronicling the local Seattle theater scene, writing a steady stream of reviews. A weekly column has also begun to take shape.

In a column from earlier in May, she decried the trend amongst readers to consume "irrelevant, crass, and immature personal material from questionable sources." Continuing on, she writes: "There’s no telling when one’s fragmented, unprocessed and previously overlooked outbursts may be recycled into the fodder of scandal and public shame. Foxy Knoxy used to be just a soccer nickname."

In addition to writing for the West Seattle Herald, Knox has also taken the time to finish her undergraduate studies at the University of Washington, and has also been working at a bookstore. Her memoir about her arrest, trial, and its subsequent aftermath, Waiting To Be Heard, was released to generally positive reviews in 2013.

By all accounts, it seems that Knox's life has settled into a new normalcy, and she remains reluctant to return to a life in the spotlight. In the same column quoted above, from May 2 of this year, Knox says, "I have the power to choose what, when, where, and how I want to share myself. Lately my world has been lit up by new work and new love, and for now, these parts of myself belong close to my heart."