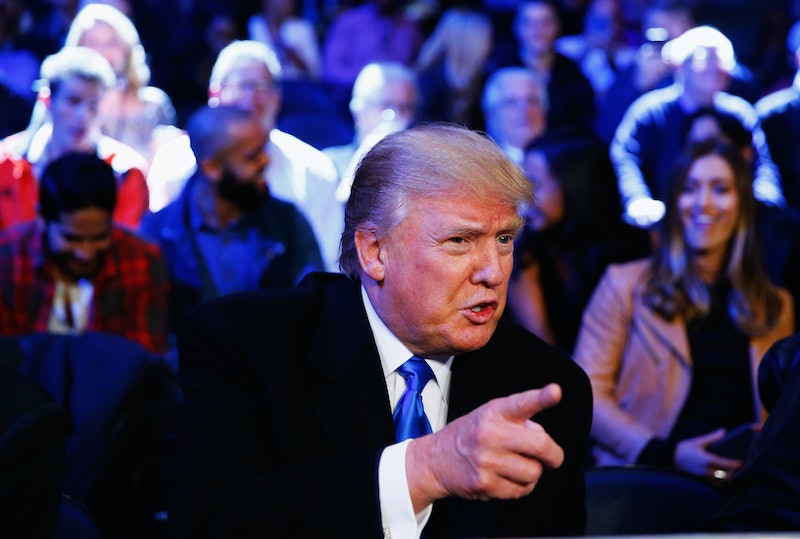 Just like the common elementary school bully, the presumptive Republican presidential nominee is a big fan of nicknames. This may not come as much of a surprise considering that the candidate is Donald Trump. After a rather vicious primary season — in which Trump triumphed — The Donald can boast an impressively long list of nickname creations for his opponents. Because there are so many monikers to keep up with, here is a definitive ranking of Trump's nicknaming skills on a scale he would understand: from "weak" to "dumb."

Most people encounter Trump's nicknames over Twitter. However, the candidate (considering the issue at hand, the label "politician" does not seem right when referring to Trump) also often uses these petty names when speaking at rallies across the country. Before he became the only plausible GOP nominee, Trump also employed nicknames for his opponents in the Republican debates.

Trump is clearly proud of his nicknaming abilities, as he explained his naming process to The New York Times magazine: "I feel it, it’s an instinct." Yes, that's right, a man who could be the next president of the United States likes to brag about his instinct for calling names. How very presidential.

Trump went on to make sure that the Times understood that he comes up the names himself, and that the only focus group used in their creation was his own cranium. (Though The Donald thinks this reflects well on himself, I must laughingly disagree.)

Here is my definitive ranking of Trump's nicknaming skills. Don't worry, I'll use a rhetoric The Donald can understand: "Weak!" and "Dumb!" will be profusely employed, just as they are on the candidate's Twitter.

It's possible that Trump's nickname for Marco Rubio was the most effective nickname of all — it even won The Donald a nickname in return. ABC News reported that Trump began calling Rubio "Little Marco" at a campaign rally in March. The name evidently irked Rubio, who clearly wanted to act his age, but during the debates in which Trump called the Senator "Little Marco," Rubio referred to Trump as "Big Donald." Clearly the failed candidate does not have Trump's knack for naming. According to The New York Times, Trump also often called Rubio a "lightweight senator."

Considering that they were the only two candidates with any chance at clinching the Republican nomination, Trump and Senator Ted Cruz had a rather vicious relationship. This viciousness manifested itself in Trump's anti-Cruz tweets, in which The Donald always referred to his opponent as "Lyin' Ted." Trump debuted this nickname the same day he tried out "Little Marco" for the first time; however, Cruz never attempted nickname retaliation.

One of his first forays into name-calling (debuted way back in August 2015), Trump's nickname for former Florida Governor Jeb Bush (low energy) didn't last too long. However, Trump did point out that Bush went by a sort of moniker, Jeb!, not wanting to associate with his notorious political family.

Yup, the possible next president of the United States isn't above name-calling the former secretary of state. However, Trump clearly spent a lot of time and energy on his name for Clinton because he didn't reveal the Democratic front-runner's moniker until mid April. The Donald is making up for lost (name-calling) time now, though — Trump tweets constantly about his opponent, "Crooked Hillary." According to ABC News, Trump uses Clinton's nickname to contrast with himself; he claims that Clinton is "crooked" because she is influenced by lobbyists and political groups, but that The Donald is a free agent.

ABC News reported that Trump first referred to Senator Bernie Sanders as "Crazy Bernie" back in January, however, The Donald recently brought back Sanders' nickname on Twitter. Considering that Trump is the one doing all the name-calling, it seems a bit hypocritical to refer to the Vermont Senator as the "crazy" one.

Arguably his most infamous nickname job, ABC News reported that Trump first referred to Senator Warren as "goofy" on Twitter on May 6. Considering that Warren often takes Trump to task for his racist, sexist, and overall disturbing remarks, Trump probably should have thought a little harder about his moniker for Warren. On a serious note, it seems incredibly insensitive for Trump to refer to Warren as "goofy" after she challenged him on his discriminatory rhetoric.

After compiling this list, I've realized that every single one of the nicknames The Donald so artfully created could easily be used to refer to the man himself. This whole name-calling thing feels more than a little "goofy" to me.