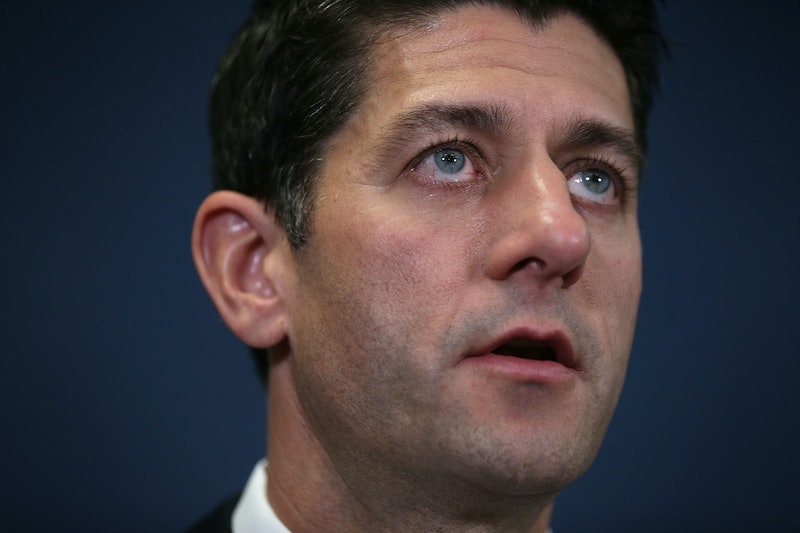 Thursday marks a clash of titans: Donald Trump and Paul Ryan met in Washington to discuss possibly playing nice. Ryan announced last week that he wasn't ready to support Trump, who responded to say he wasn't ready to support Ryan. The divide between the two men personifies the split in the Republican party as a whole ever since Trump's political rise. In light of this, the outcome of Thursday's meeting is especially meaningful: Ryan held back from endorsing Trump, but described the lone Republican candidate for president as "warm and genuine" (yes, really).

The publicly stated mission for Thursday's meeting had been "party unity." This plan is far, far easier said than done, however, especially when it's helmed by Trump and Ryan, two men whose ideologies are on opposite extremes. Trump is a populist who seems to wear different policies each day like clothing. Ryan is the wonky conservative with a vice-like grip on his core policies.

On Thursday, the plan was for the Donald to meet with Ryan as well as with Sen. Mitch McConnell of Kentucky, the majority leader, and his leadership team (a meeting the Trump team requested). It's clear Trump, who has never attacked Ryan in one of his vengeful and petty rants, despite the Speaker's harsh words for him, is offering him and the rest of the party an olive branch of sorts.

The thing is, Ryan is a huge idealogue — more so than Trump, even, who may spout extremist views but flakes on them a lot. (Just this week, he dismissed his notorious Muslim ban as merely "a suggestion.") Peter Wehner, a director of the White House Office of Strategic Initiatives under George W. Bush who has known Ryan for two decades, told The New York Times, “People in politics tend to be in two categories. Some are drawn to politics because they like the games and mechanics, and their first priority is the party. Bob Dole fell into that category. Mitch McConnell is also that party guy. And Ryan is just more in that camp of ideas, and he thinks about the party mostly as a vehicle to advance conservatism.”

Ryan may have earned some mainstream credibility for opposing Trump because of his strong views, but those same unbudging views could also hurt his party. If he values his ideas over the institution of the party, that could mean a long, long road to party unity.

Several GOP lawmakers seem wary about Ryan's outspoken stance against Trump, even though he pared down his vitriol after the meeting Thursday. "It makes it harder to unite," said Rep. Raul Labrador of Idaho on CNN. Nevada Rep. Mark Amodei felt the same and said, "Ryan goes out on CNN and says it's Donald Trump's duty to unite the party. So Mr. Speaker, what's your job regarding unity?"

Well, Ryan has indicated he does care about "party unity." In a meeting with party members on Wednesday, he reportedly said, "We have an obligation to merge and unify around our common principles." But Trump has said he wouldn't revise his platform to fit the GOP's expectations, so it's up to Ryan to figure out how he'll need to Trumpify his ideals. I don't see him going against his own ideologies like that without a difficult and painful battle.