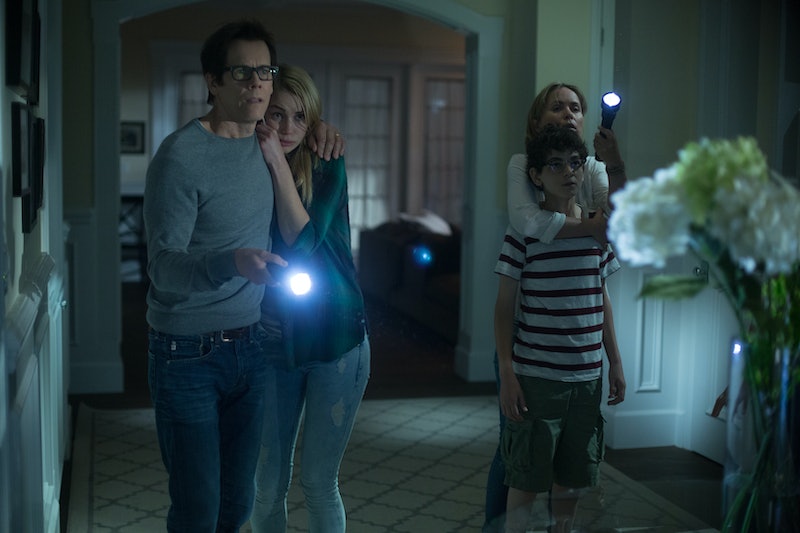 Like many horror movies, The Darkness, out Friday, May 13 (yes, really), features a plot that'll leave audiences with goosebumps. The film follows a family who, after a visit to the Grand Canyon, think they've brought home a supernatural force, and the creepiness of the tale leads many to wonder if The Darkness is based on a true story. Yet while many elements are true to life—the minivans, the over-concerned parents, the mean older brother, I've got some bad news, scaredy cats: The Darkness is actually based upon more than one true story.

Contrary to what some believe, The Darkness is not a cinematic version of the video game series of the same name. This one stars everyone's favorite ham, Kevin Bacon, as the father of a son who steals a rock from a burial ground at the Grand Canyon, bringing a bunch of evil spirits back to the burbs. Though it might sound like horror movie from the '50s, the film’s co-writer and director Greg McLean drew up the story from actual terrifying personal accounts that took place in the Grand Canyon. McLean revealed to Entertainment Weekly that The Darkness is based on several true stories, saying, "I was reading about people that had taken objects from the Grand Canyon, and then bad luck started to unfold." While he hasn't reveal which specific stories inspired the film, it turns out that there are tons of ghost stories coming out of Grand Canyon.

The National Park is ripe with supernatural and scary tales. Digging into stories of the haunted grand canyon will lead you to a few old school websites that talk about disappearing children, ghosts of canyon workers crushed by boulders, and, more commonly, the spirits of people killed in air crashes. According to Michael P. Ghiglieri, author of Over the Edge: Death in Grand Canyon, air crashes are the most common cause of death. "All told, there have been 65 fatal crashes of various aircraft in and around the canyon, accounting for 379 victims," he told the Los Angeles Times in 2012. "Of these, 259 died within the canyon, and 120 more died on the adjacent rims while trying to access or exit the airspace over the canyon." Because the hikes are frequently risky, Ghiglieri also noted that folks fall to their deaths when horseplaying around, but someone actually suffered heart failure when a rattlesnake scared them.

So if you're making plans to vacation in the Grand Canyon this summer, you might want to play it safe, bring an extra flashlight, and, perhaps, a priest in the exorcism business.