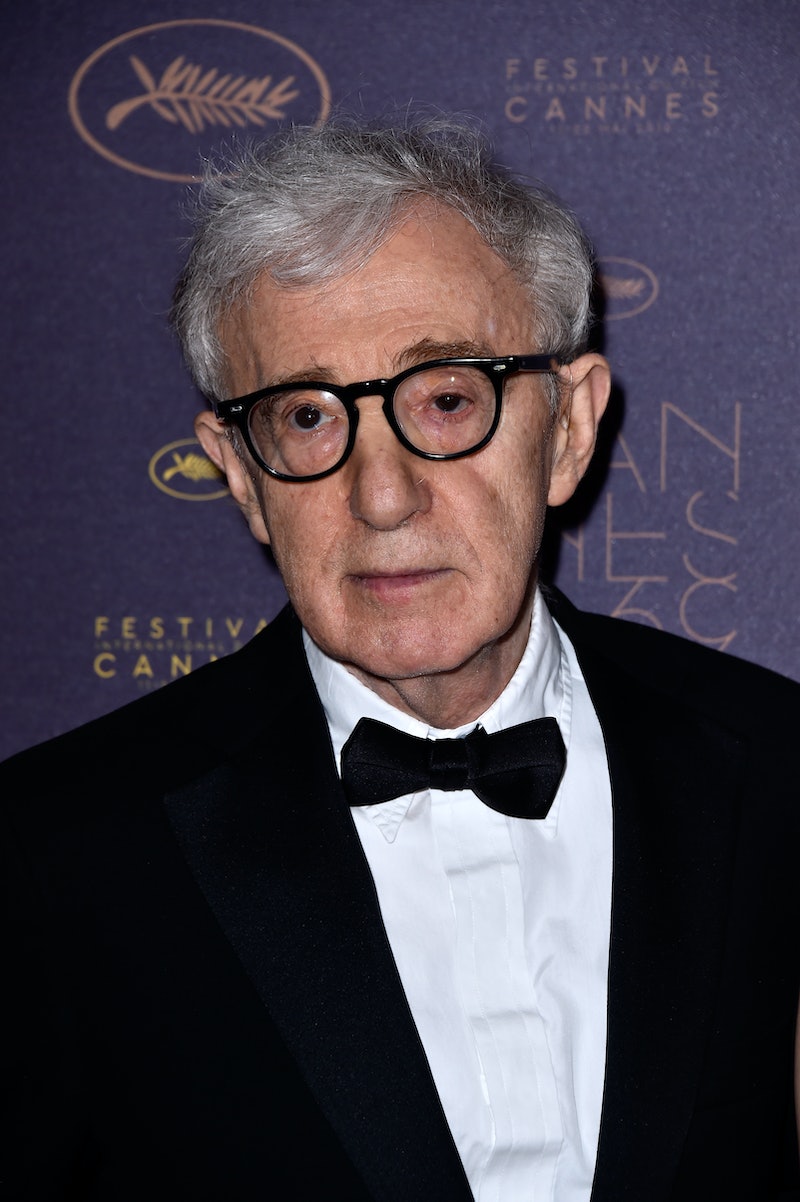 Woody Allen appears to be in the midst of controversy, once again, and this time during promotions for his latest film Cafe Society which premiered in Cannes on Wednesday. Following on from Ronan Farrow's editorial in The Hollywood Reporter in which Farrow questions why allegations against Allen haven't been taken seriously, the filmmaker has come under scrutiny. In 2014, Dylan Farrow alleged that she was sexually assaulted by Allen in a New York Times piece. That same year, Allen responded in his own New York Times piece with, "Of course, I did not molest Dylan. I loved her and hope one day she will grasp how she has been cheated out of having a loving father and exploited by a mother more interested in her own festering anger than her daughter’s well-being." Now, many reports, including one from Vulture, detail a Cannes press lunch for Allen's new film Cafe Society at which reporters quickly strayed from questions about the film to address the controversy brought about by Ronan Farrow's latest statement on the matter. Unfortunately, in his response, Allen compared to the allegations to a bad review.

When asked about Farrow's editorial, the 80-year-old replied,

According to reports from the lunch, Ramin Setoodeh of Variety then responded, "But this isn't a critic... it's your son," to which Allen finished the conversation with, "I’ve said all I have to say about it."

Considering just how serious the allegations are against Allen, this kind of dissociative response feels wrong. It's understandable, of course, for any artist to want to reject knowledge of their own press completely. However, while he has denied that the accusations against him are true, Allen's response appears to be trivializing the topic of abuse allegations in general and dismissing it like a mundane piece of tabloid gossip barely worth his commentary.

The details of allegations against him aside, what is perhaps most upsetting about his response is the idea that Allen, who remains one of the most powerful and well respected auteurs in the industry, is reinforcing his entitlement for separation between life and art. That, once he's finished creating his movie and promoting it, he should have the freedom to exist without having to be aware of his public image or even be responsible for it. That seems incredibly dangerous regardless of what he's been accused of. Essentially, that viewpoint removes the need for accountability altogether.

Objectively, it feels logical to be able to appreciate the work of an artist, even if you condemn the creator of it based on their alleged crimes, views, or opinions. But, at some point, the art surely reflects some part of the life we separate it from, and continuing to support that art implies a certain complicity with the person who is putting it out there to be enjoyed.

It feels difficult to remove Allen's lack of response to Ronan's letter, for instance, from Cafe Society, especially now that the topic has entered into the promotional discussions for the film. It also feels difficult to re-watch many of Allen's movies from his long career without the fog of these allegations distracting from them.

The fact is, the conversation is being had with or without Allen, and, whether the allegations against him (which he has always adamantly denied) are true or not, it feels unfair to everyone involved to act as if they don't exist when a new project emerges. Worse, doing so also feels unfair to a larger conversation regarding sexual abuse and assault allegations. Regardless of your beliefs about who is right and wrong, the topic itself desperately requires that we, at minimum, take it more seriously than a bad review.