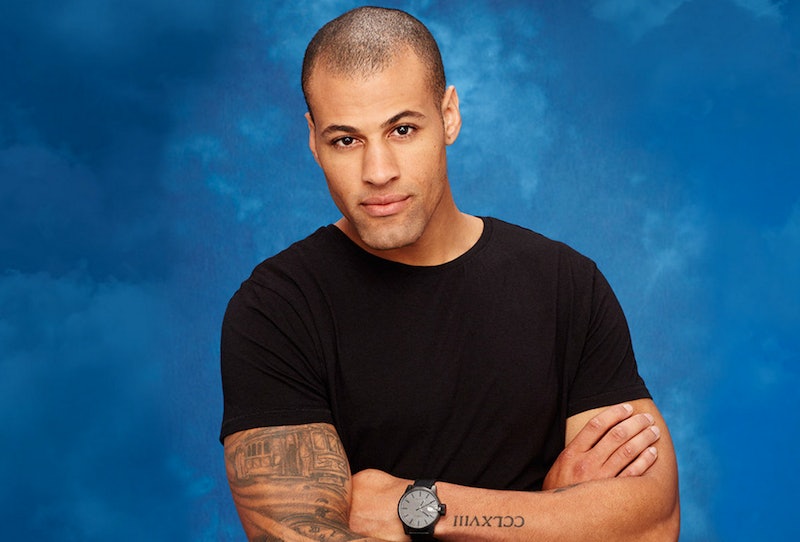 It's that time of year, y'all! JoJo Fletcher's Bachelorette season is about to premiere! While it is exciting enough that JoJo is the Bachelorette this time around, it's also pretty exciting that ABC has released JoJo's Bachelorette cast of the guys who are lucky enough to try their hand at love with the 25-year-old Texan. As is usual when the cast members are announced, I like to scroll through and make my early picks and predications, and I noticed Grant Kemp, a tall and handsome firefighter, who also sports a lot of ink. Since I have a sneaking suspicion that he will be around for a bit, I wonder what Grant Kemp's tattoos mean and how many he has?

As it turns out, Grant is already being flagged as a favorite, a few weeks before the May 24 premiere. Chris Harrison spoke to Yahoo! TV and named Kemp as one of his five men to watch. “He’s a firefighter and I am a sucker for firefighters, military, and all that," the host said. "That’s a good way to go because I think it takes a certain kind of person to serve for a living. He’s a buff and good-looking guy."

That certainly is very true. Without further ado, let's examine some of Grant's tattoos, since I have a feeling he will be shirtless — a lot.

Grant is listed as a San Francisco native, so this is most definitely an homage to his roots and I respect that.

2. Wings On His Right Forearm

There is definitely a wing situation on his arm. Is this symbolic for him being free as a bird?

The Bachelorette contestant posted a photo about six months ago of his newest piece: an owl portrait on his other left forearm.

Did he get one of those free Friday the 13th tattoos?

5. An Inspirational Quote Across His Chest

His tattoo says "Stop At Nothing." We all need a little motivation when we look in the mirror every now and then, no?

6. A Mandala Design And A Stop Watch

What does it all mean, Grant?

"CCLXVIII" stands for the number 268, and it must have a special meaning to him.

Grant's tattoos seem to be very diverse and tell his personal story, and I am sure we will hear a lot more about them once The Bachelorette premieres!