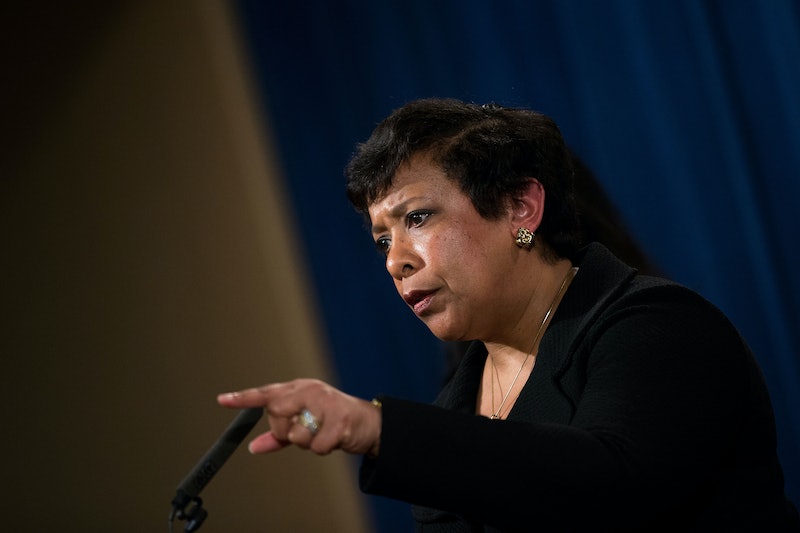 This March, North Carolina Gov. Pat McCrory signed House Bill 2 (HB2), a law requiring people to use the public bathrooms which correspond with the gender they were assigned at birth, rather than their stated gender identity. Despite its proponents' defense, the legislation appears designed not in response to any actual public safety concerns, but merely to restrict and harass trans people. Earlier this month, Attorney General Loretta Lynch not only denounced the law, but also declared that her office had found that HB2 violates federal civil rights laws, and she ordered North Carolina to halt its implementation.

Instead of responding to that order, McCrory sued the Department of Justice earlier this month, prompting Lynch to file a federal civil rights lawsuit against the state of North Carolina. Lynch, a North Carolina native and the first black woman ever to serve as U.S. attorney general, said that the lawsuit is “about a great deal more than just bathrooms.” In fact, she went so far as to liken HB2 to “the Jim Crow laws that followed the Emancipation Proclamation” and called on her fellow Americans to “avoid repeating the mistakes of our past.” McCrory, who is white, described Lynch’s comparison as an “insult” to the people of North Carolina. But is it?

I decided to compare the language used by proponents of HB2 to that employed by advocates of Jim Crow laws, to see if there were indeed parallels that could be drawn between the anti-trans legislation and the old segregation laws and policies.

Proponents of HB2 claim that it arose in response to privacy concerns and the idea that allowing transgender people to use whatever bathroom they want intrudes on the rights of others. Franklin Graham, North Carolina native and son of famed televangelist Billy Graham, said that HB2 defends "women and children against sexual predators,” echoing North Carolina Lt. Gov. Dan Forest’s remark that the law is “worth it” if it keeps one child or one woman from being “molested or assaulted.”

South Carolina State Sen. Lee Bright, who tried and failed to get a similar law passed in South Carolina, says that the law addresses “a safety issue." Many of the law's defenders claim that HB2 protects religious freedom and, according to McCrory, the "traditional way we do things." Similarly, many who oppose the Obama administration's efforts to mandate that public schools allow trans students to select their bathrooms argue that their anger is based on the the federal government impinging on states' rights, not transphobia.

Such rationale eerily echoes many of the justifications for racial segregation in America, since both focus on false safety concerns and complaints of federal overreach. Arkansas Gov. Orval Faubus and Alabama Gov. George Wallace railed against the “autocracy” and “tyranny” of a federal government eager to trample the rights of pro-segregation Southerners.

Jim Crow laws were also framed in the context of safety with regards to unfounded fears about what black people (especially black men) would do to white people (especially white women). In the Jim Crow era, many lawmakers insisted that public spaces had to be segregated to guard the virtue of white Southern women who would otherwise be vulnerable to sexual assault.

In her book White Women, Rape, and the Power of Race in Virginia, 1900-1960 , University of Alabama professor Lisa Lindquist-Dorr wrote about rape trials which involved white Southern women accusing black men of rape and sexual assault. One of the most infamous examples is the Scottsboro trial — the 1931 Alabama case in which nine black men were falsely charged with rape, and eight were sentenced to death. (After several years of legal battles, most were eventually exonerated.) Although Lindquist-Dorr noted that we can draw many complex insights from the Scottsboro case, one is that it added to "the power of the 'rape myth': That white southerners accepted all white women's accounts of rape when they accused black men, thereby instigating a united effort to seek revenge. The myth insisted that black men were driven to assault white women and that, as a deterrent, "black beast rapists" should pay with their lives ..."

Phoebe Godfrey, associate professor in residence in the sociology department at the University of Connecticut, tells me that when it comes to the anti-trans movement and the anti-segregation movement, “the parallels are direct and obvious." She explains: "White parents were hysterical about the integration of bathrooms from the point of view of protecting white women … The language is very similar. It’s all about uncleanliness, disease, intrusion, and a sense of personal space and privacy being violated by The Other.”

Godfrey tells me that during the Jim Crow era, there were "rumors about getting syphilis from the toilet seat," and many people believed white women would be at greater risk of infection as a result of sharing bathrooms with black women. Many white people also feared that desegregation would encourage interracial marriage and thus lead to the eventual destruction of “whiteness” itself.

Eileen Boris, professor of feminist studies at the University of California at Santa Barbara, tells me that the line of argument being used to justify bathroom bills specifically reminds her of “World War II and war production plants’ resistance to hiring black women because they would have to share bathrooms with white women, the theory being that [black women] were diseased.”

Racism, Boris says, is often expressed through “trying to make distinctions between people’s bodies based on culturally-imposed notions.” She sees HB2 as working in a similar way, “with a new group of bodies being perceived as different.” She says that the language used to justify these laws is “so similar” to language onced used to justify racial segregation.

By now, we know that the desegregation of public bathrooms did not lead to the increased sexual victimization of — or a syphilis outbreak among — white women. Is there any credible evidence that allowing transgender people to use whichever bathroom they want will increase violence against women and children?

The Advocate reported that “there has never been a single verified report of a transgender person assaulting a [non-trans] person in a bathroom or locker room, nor has there ever been a confirmed instance of someone ‘pretending’ to be transgender to gain access to sex-segregated spaces.” According to a 2013 paper by Jody L. Herman of the Williams Institute at the University of California at Los Angeles School of Law, transgender and gender-nonconforming people are frequently denied access to gendered restrooms.

Herman’s paper is based on a survey of 93 trans and gender-nonconforming individuals conducted with the D.C. Trans Coalition, which found that 70 percent of respondents had been denied access to public restrooms or verbally harassed or assaulted for using them. Moreover, 54 percent of respondents reported experiencing physical discomfort as a result of avoiding public restrooms, including dehydration, kidney infections, and urinary tract infections. Additionally, 58 percent reported that they had avoided going out at all because they felt unsafe using public restrooms.

In other words, transgender people are targets of bathroom-related bullying, not perpetrators of sexual violence. To claim otherwise is ignorant at best. More often, it’s a lie designed to stoke anti-trans bigotry.

“Both racial and transgender desegregation require getting used to. For much of the South, the speed of this transition in social norms has been quite a shock,” Gavin Wright, William Robertson Coe professor of American economic history at Stanford University, tells Bustle in an email.

Wright says that in the 1960s, “establishments feared that desegregation of lunch counters and restrooms would drive white customers away. But after the fact, customers got used to it in a matter of days or weeks — maybe a year or two in smaller towns and rural areas.” Wright says that he looks forward to “a similar transition” for transgender people.

As the Attorney General said, "state-sanctioned discrimination never looks good in hindsight." Proponents of HB2 should heed Lynch’s call to remember the ugly not-so-distant past of the Jim Crow South.