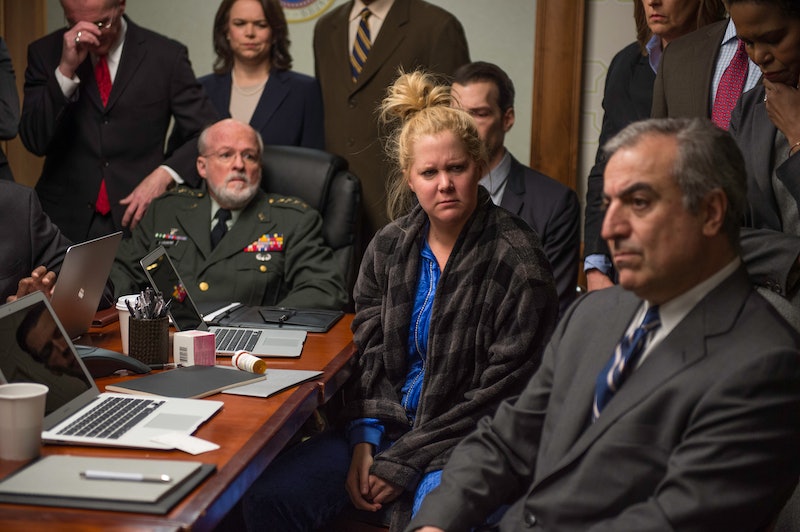 Amy Schumer has already taken on workplace sexism this season and it was only a matter of time before she addressed the role it plays in politics. The Inside Amy Schumer "Madame President" sketch, which you can watch on Comedy Central's website with a cable subscription login, pulled no punches when it highlighted the sexism faced by female candidates. Amy plays Amily Schinton, the first female President of the United States who is horrified to wake up and realize that her first day in office is also the first day of her period. Cue all the stereotypes of how women behave on their periods.

During meetings, the President is focused on obtaining chocolate and Advil rather than discussing the issues at hand. She sobs when anyone disagrees with her and begs them to "stop yelling," before finally declaring: "I can't be President because I got my period!" Amily cheers up when she's told that her hair looks good, then heads off to presumably resign because, as everyone knows, women are far too emotional to hold office. As the sketch ends, a magazine cover with her photo asks the question, "Is the President plus size?" (Presumably a reference to Schumer's recent inclusion on a Glamour list of "plus size" women.)

The "Madame President" sketch was timely, and it successfully highlighted the sad fact that some people honestly believe women's hormones will affect their ability to succeed in office. But, it missed the opportunity to touch on other sexist issues faced by female politicians — because, unfortunately, the fact that women menstruate is far from the only reason they face discrimination. In fact, the 2016 election has shown us that double standards are arguably a bigger problem than the idea that a woman shouldn't be President because she gets her period.

The Democrats have two great candidates in 2016, each with their own very different set of strengths. Both Bernie Sanders and Hillary Clinton are passionate about their platforms and have engaged in heated (but overall respectful) debates. But, when they both raised their voices, Clinton was criticized for being "aggressive." Like women in many fields, she apparently has to toe a careful line of being both "likable" and "strong" and it's been pretty much impossible for her to find a balance that satisfies the media and the public. To be clear, Sanders hasn't directed any sexism towards his opponent, and the fact that she faces double standards from the media doesn't mean feminists should automatically give her their vote. But, regardless of which candidate you support, it's important to recognize that Clinton has faced sexist treatment and future female presidential candidates can probably expect the same.

In short, Schumer's sketch could have gone further in addressing the sexism faced by all female politicians. I hate to say it, but these women have way more to worry about than the myth that their periods will make them ineffective leaders.

More like this
Amy Schumer Is Actually The Other Kardashian Sister You Never Knew About
By Jake Viswanath
Yes, Billboard Queen Angelyne Really Ran For Governor Of California
By Brad Witter
Watch Benedict Cumberbatch Lead An ‘SNL’ Medieval History Lesson On Roe v. Wade
By Grace Wehniainen
Kim Kardashian Remembers Her Last Words To Death Row Victim Brandon Bernard
By Jake Viswanath
Get Even More From Bustle — Sign Up For The Newsletter