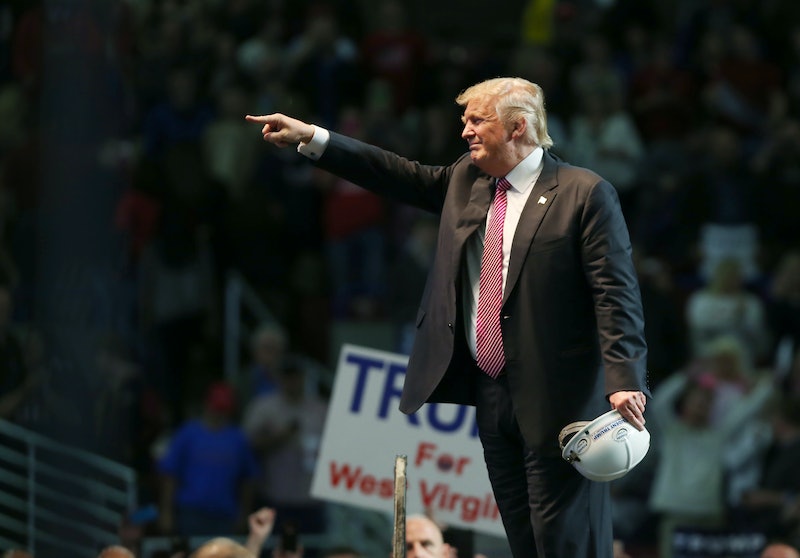 Donald Trump did a lot of things before running for president. In addition to negotiating real estate deals and starring in a reality television show, he also played himself in a couple of WWE wrestling matches. Watching them now is something of an eerie experience, because in more ways than one, Trump’s WWE wrestling appearances are a frighteningly accurate preview of the presidential campaign he’d run 10 years later.

Starting in 2007, Trump made several cameos in World Wrestling Entertainment matches. He became the subject of a storyline, soon dubbed the “Battle of the Billionaires,” that involved him feuding with WWE owner Vince McMahon. At one point, he even got into the ring himself and went toe-to-toe, if you want to call it that, with Steve Austin.

There’s one clip in particular that stands out from the rest. It’s 22 minutes long and has a lot of filler, but the gist of it is that Trump and McMahon make a bet, and whoever loses the bet has to get his head shaved by the winner. After lots of smack talk between the two, Trump wins, and proceeds to cut off McMahon’s hair on live television. In retrospect, this Trump-McMahon feud is the perfect microcosm for Trump’s 2016 presidential campaign.

The clip opens with the silver fox McMahon strutting around the ring, insisting that Trump is going to be “the laughing-stock of the entire world” when he loses the bet.

“I created this world, I created Wrestlemania, and I’ll be damned if I’m going to be embarrassed!” McMahon barks to the crowd. “I would suspect that Donald, right about now, has got a little case of the heebie-jeebies.” But the crowd boos — they support Trump.

Then, Trump enters the arena. Flanked by models and looking somewhat out of place in his black trenchcoat, Trump saunters on stage and, after creepily declaring that “your grapefruits are no match for my Trump Towers,” he starts talking about his poll numbers.

“I don’t know if you’ve seen the latest poll,” Trump says, “I saw the other night, John Travolta, he prefers Trump. I see others prefer Trump. The poll shows 95 percent of the Hollywood celebrities want your head shaved, and we’re gonna do it.”

“You might have some support from this audience,” McMahon replies, “but 95 percent of ‘em are idiots.”

“To me, they look like a very smart group of people,” Trump shoots back. The crowd, of course, goes wild.

To recap: We have McMahon, an out-of-touch establishment figure, incorrectly assuming that his victory is a foregone conclusion. We then have the outsider Trump, storming in and confronting the standard-bearer on his own turf. Trump uses polls to argue that he’s actually more popular, and then, just for good measure, heaps praise upon the common folk in the arena.

McMahon, then, is the Jeb Bush of this match. As the owner of the WWE, he embodies the existing establishment, and because he’s been part of it for so long (“I created this world!”), he treats his victory over Trump as a given. The Bush family, meanwhile, played an enormous role in building the modern-day Republican Party, and when Jeb launched his campaign, many in his circle believed he’d waltz to the nomination.

But Trump proved to be the more able competitor. Both in 2007 and in 2016, he marched in, touted his superior poll numbers, bragged about his manhood, and lavished praise upon the everyman. And then he ended up winning.

If nothing else, this little wrestling storyline from 10 years ago gives insight into how Trump wants to be perceived by the world. He likes to be seen as the outsider who storms into existing institutions and takes down unpopular leaders from within. He certainly wants it to be known that he’s rich, but also goes out of a way to be a champion for the little guy. (At a different WWE match, Trump literally showered money onto the crowd.)

This approach worked for Trump in Wrestlemania. But Wrestlemania, of course, is scripted. Pulling off the same stunt in a national presidential election is a much tougher proposition.