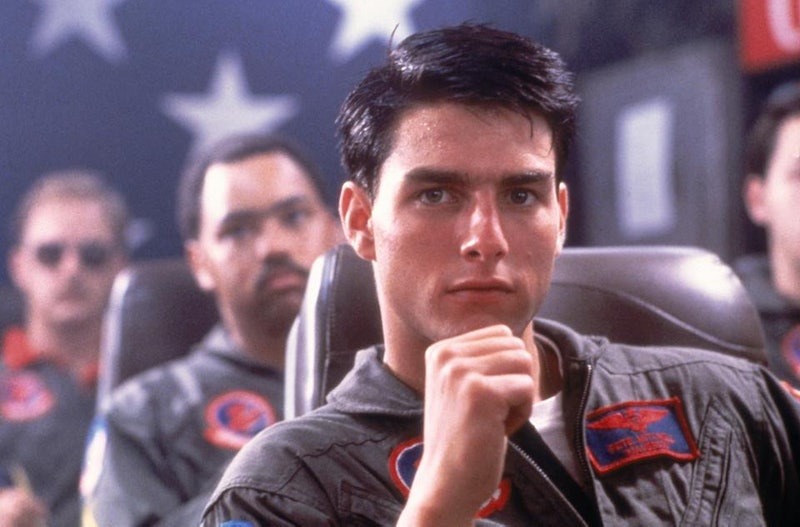 It's almost hard to believe that the classic '80s movie Top Gun is about to reach its 30th anniversary of release. The film that launched Tom Cruise's career into the stratosphere is still so iconic and referenced, even in 2016. This is a movie near and dear to me for many reasons, so I decided it was time to rewatch Top Gun as an adult. According to my parents, the film was the first one I had ever seen in a movie theater and I cried the whole time. I was two years old. Lesson learned: Toddlers don't quite like Top Gun.

But as an adult, I graduated from USC's MFA screenwriting program, which was chaired by one of the screenwriters of the movie, Jack Epps Jr., and I worked for director Tony Scott for a bit, an internship during which a giant Top Gun poster in the office stared at me daily. So this movie about Maverick (Cruise) and his adventures at the Naval Fighter Weapons School has found a way to follow me — and you, too — into adulthood. Because if I've learned anything over the years, it's that "the need, the need for speed" never dies. It just demands to be rewatched again, just like how Berlin's "Take My Breath Away" is played over and over in the movie.

So come along with me on a trip back into the "Danger Zone." Don't forget your volleyball.

I always forget that. Cruise is memorably known as Maverick. Anthony Edwards (of ER fame) plays Goose. Val Kilmer coolly portrays Iceman with the cool glasses. If you look at the character list on IMDb, all the call signs look like a roster of MMORPG usernames.

3. Maverick Is Such A Maverick, Get It?

He doesn't want to land planes when they tell him to! His ego is "writing checks his body can't cash"! He's brave and good pilot, but such a rebel. And that's what gets him into Top Gun flight school.

Top Gun has a classic soundtrack, but not much of a varied one in the film itself. Here's my tally of how many times each song appeared in the movie.

5. Maverick Hits On Charlie By Following Her Into The Ladies Room

After serenading Kelly McGillis' Charlie with "You've Lost That Loving Feeling," Maverick follows her into the bathroom to convince her to sleep with him. Because that's not stalking at all.

The joke's on him, because she winds up being his flight instructor. D'oh!

6. The Volleyball Scene Is Even More Greasy Than You Remember

The infamous Top Gun volleyball scene is only about a minute and a half, but it is one of the richest and often analyzed minutes in cinematic history. I need to break it down even further, but let's start with this: There is no explanation for why they are playing volleyball. The previous scene was in class, and Maverick told Slider that he smells. And then, volleyball.

Every dude is oiled-up, shirtless, and playing in jeans — except for Goose, who plays volleyball in a shirt, separating himself from the homo-eroticism.

7. The Song "Playing With The Boys" Only Adds To The Homo-Eroticism Of This Scene

Playing. With. The. Boys. That is exactly what's happening. Thanks, Kenny Loggins.

8. They Mostly Spike The Ball & Fall Into The Sand

Because that's how greased-up naval pilots play volleyball? No other moves needed, I guess.

10. Maverick's First Date Question: "Do You Mind If I Take A Shower?"

This is literally how he opens his first date with Charlie. You know, because he's been playing volleyball with the boys all afternoon and couldn't be bothered to shower before his big date. Way to be a rude maverick, Maverick.

Later in the date, he leaves, saying he's going to take a shower. Really. This becomes banter between Maverick and Charlie.

Yup, that Meg Ryan. And here's some more trivia for you: Ryan and Edwards dated back in the '80s soon after the movie wrapped, according to People. As Goose's wife, she talks up Maverick to Charlie, telling her to lock it down with him, because he's such a catch.

12. Goose Dies, But Viper Does Not Care

"You got to let him go," Viper tells Maverick, who takes his wingman's death to heart, because, you know, it's death.

13. Then Maverick Is Lost For A Half-Hour

Seriously. Post-Goose's death, Maverick goes on a soul-searching tour, during which he mostly stares into the distance, wondering if he should continue flight school.

Ultimately, the answer is yes (duh), he must return to the "Danger Zone." Because that song is on again and you can't say no to Kenny Loggins.