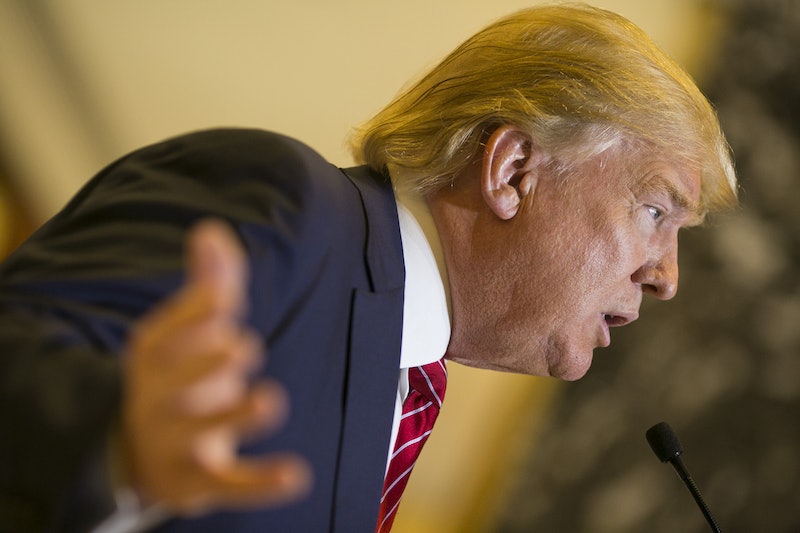 A week after the Republican presidential primary came to a screeching halt with Donald Trump named the party's presumptive nominee the real estate mogul appears to be abandoning one of the most successful tenets of his early campaign. After bemoaning what he has called politic's "corrupt" fundraising system for nearly a year, Trump revealed he won't self-fund a general election campaign earlier this month and is now reportedly actively looking to solicit big-dollar donors for money.

"All these guys, they're controlled by the people that give them the money. They're going to do what their donors and lobbyists tell them what to do." It was a message Trump had drilled into supporters' heads over and over again during the primary, boasting his self-funded campaign made him the only candidate not indebted to wealthy donors. "I'm not controlled by special interests and lobbyists and donors," he told Fox News' Sean Hannity in July of last year. "I don't need any money. I'm using my own money." But now the man who once prided himself on taking roughly $36 million taken from his own pocket to fund his campaign has begun planning big fundraisers, hired a national finance chairman and welcomed a super PAC.

"I'll be putting up money, but won't be completely self-funding," Trump told the Wall Street Journal, adding his campaign had already begun to establish a joint fundraising committee with the Republican National Committee in the hope of soliciting donations as large as $300,000. It seems a potential $1 billion general election tab is more than Trump would like to take on alone.

According to ABC News, hedge fund manager Steve Mnuchin was recently brought on as Trump's national finance chairman with fundraising efforts getting underway almost immediately. The presumptive nominee will reportedly hold his first fundraiser in Los Angeles on May 25 with a second planned to follow shortly after in New York.

Interestingly, because Trump rarely ever donated directly to his primary campaign — the $36 million he funded his election operation with was arranged as a loan — he reportedly has the legal option of using new donations to repay that loan, NBC has reported. Trump's campaign manager Corey Lewandowski, however, has insisted the real estate mogul has no intention of repaying himself.

The move to a more conventional campaign operation is a dramatic shift in principle for Trump given the heavy criticisms he levied against his competition for taking money from wealthy donors and super PACs in the Republican presidential primary. And it doesn't come without risks. In turning to wealthy donors, Trumps hazards alienating supporters who were initially drawn to him because they felt his self-funded campaign put him beyond the reach of such political donors. Despite Trump's attempts to gradually roll out the news he's given up the jig of self-funding his way to the White House, supporters aren't likely to not notice as the whole thing feels a little bit like a bait and switch.