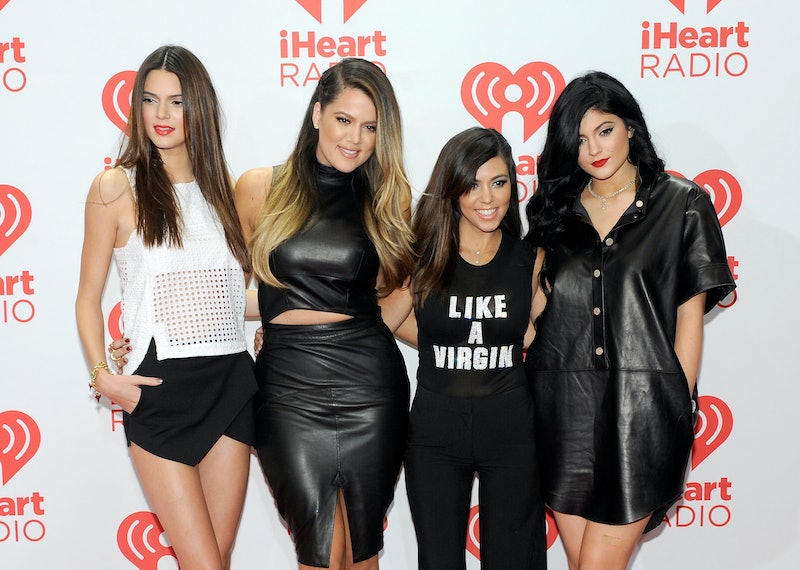 It seems like you can't go a day without hearing something about the Kardashian-Jenner family. Whether it's what makeup items they're launching or what they're wearing, it's crazy to think there are people who don't, well, keep up with the family. According to a Harper's Bazaar interview, Karl Lagerfeld doesn't watch Keeping Up With The Kardashians . Actually, he didn't even know that Kendall Jenner was on the show when he first hired her, and that's great news for her modeling career

In a world where the Kardashian-Jenner's are on almost every single screen and page in the world, it's almost unbelievable to think that anyone is oblivious to what the family does. Ever since Jenner walked her very first runway show with Marc Jacobs, people have been saying that she only gets her jobs because of her social media presence and reality show popularity — something she says actually worked against her when she first started out. Well, Lagerfeld just proved the haters completely wrong.

In an joint interview with Jenner and Lagerfeld, who shot her latest Harper's Bazaar cover, the fashion icon admitted that he doesn't watch Keeping Up With The Kardashians. Laura Brown, who interviewed the pair, asked Lagerfeld how he first became aware of Jenner and if he had ever watched the show. His response was pretty shocking, if you ask me.

How did Jenner react to that? She wasn't mad one bit. "I love that," Jenner replied. "That's so refreshing to me."

It didn't take the model much time to land her first Chanel runway. Actually, it was the third show she ever did. While some people thought that her rise to fame was because of her last name, the recent interview proves that's not completely true. If Lagerfeld really had no idea that Jenner was on a reality TV show, she earned her spot in his show fair and square.

Earlier in the year, Calvin Klein reportedly said that he wouldn't have booked Jenner for the My Calvins campaign in part because of her popularity, according to Cosmopolitan UK.

"You know, I'm really not that familiar with it. I'm honestly not. I'm sure she's a lovely young woman. It's not the kind of thing I would have done, even today," Klein said while speaking at the Savannah College of Art and Design. "Now, models are paid for how many followers they have. They're booked not because they represent the essence of the designer, which is what I tried to do — they're booked because of how many followers they have online."

The quote made it seem as if Jenner only got the Calvin Klein gig because of her family name and social media popularity. It's definitely possible that her established popularity helped skyrocket her career, but there are still people in the fashion world — including Lagerfeld — who love her because she's great at what she does. Here are some of her other model moments that prove she's got what it takes to go far.

The girl has worn a lot of crazy things for Marc Jacobs. It takes a lot of talent to walk down the runway with a wig over you eyes.

Ever since she walked the Balmain runway in 2015, the brand has featured her in lots of shows and even a campaign. Her best, in my opinion, was when she showed up with blonde hair.

Not that many people get the opportunity to walk the Chanel runway, let alone do it with Lagerfeld himself.

4. Her Very Own Vogue

Then, you know, there was that time that she got a whole Vogue to herself.

You need some serious skills to be able to walk in these heels.

Not just anyone gets chosen for the Victoria's Secret Runway show, but Jenner was talented enough to make the cut.

She's said before that she hates to bleach her brows, but she goes there when the job needs her to.

There's no doubt in my mind that Jenner is one talented model!