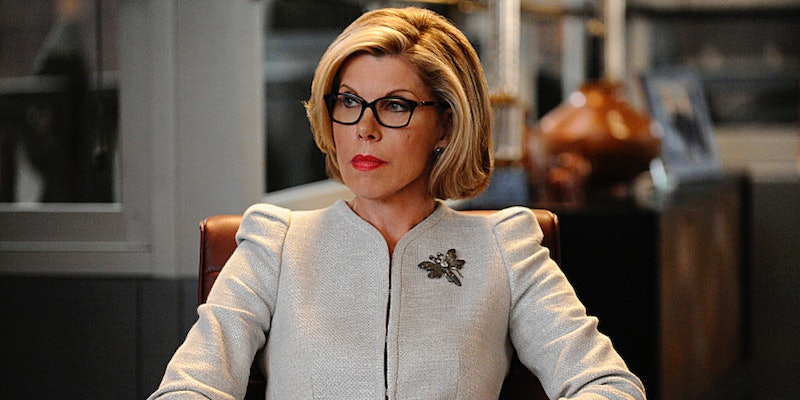 If you found yourself with complicated feelings throughout the end of The Good Wife's seventh and final season this year, I have good news for you — a Good Wife spin-off featuring Christine Baranski might be in the works. I've been a faithful fan of the show ever since it premiered in 2009, and one thing that was discouraging for me in the final seasons was how underutilized I felt like Baranski's character Diane Lockhart was. Obviously, Alicia Florrick was the main, pivotal character, and was played impeccably by Julianna Margulies, but, by the end, the show was moving in so many fractured directions that it was hard for any of the secondary characters to get the screen time that they so rightfully deserved.

At the top of that heap was Baranski, who has proven her sizable acting chops, devastating comic timing, and just general badassery time and time again. So, when I heard that the creators of The Good Wife might be developing a spin-off featuring Baranski and Cush Jumbo, who played Lucca Quinn on the series, I had mixed emotions. On the one hand, I was overjoyed, because this is just the opportunity that Baranski needs to completely blow us away, as she's done in the future and can and will do again. On the other hand, I need it to be done right.

According to Variety , the series would be co-written by husband and wife team and Good Wife co-creators Michelle and Robert King, and is in negotiations with CBS in hopes of getting a series order. So, while it's far from a done deal, I already have very high hopes for this project. Baranski is a precious natural resource, who must either be conserved or used to her highest potential. It's not every actor who could pull off a wordless slap in a series finale and walk away still looking good.

If this spin-off does, in fact, end up spinning off, I just need the Kings to take my girl Diane Lockhart very very seriously. She is a force to be reckoned with, and I want to see the show reckoning with her. I just want to make sure that her very talented eggs are safe in the spin-off's potentially great basket. Stakes are high, but with high risk comes high reward, and I have a good feeling about this spin-off going forward. After all, Baranski could act her way out of a paper bag no matter what material you give her, so just having her involved in the project makes it likely to be epic in and of itself. And Diane Lockhart getting more attention is never a bad thing, as far as I'm concerned.