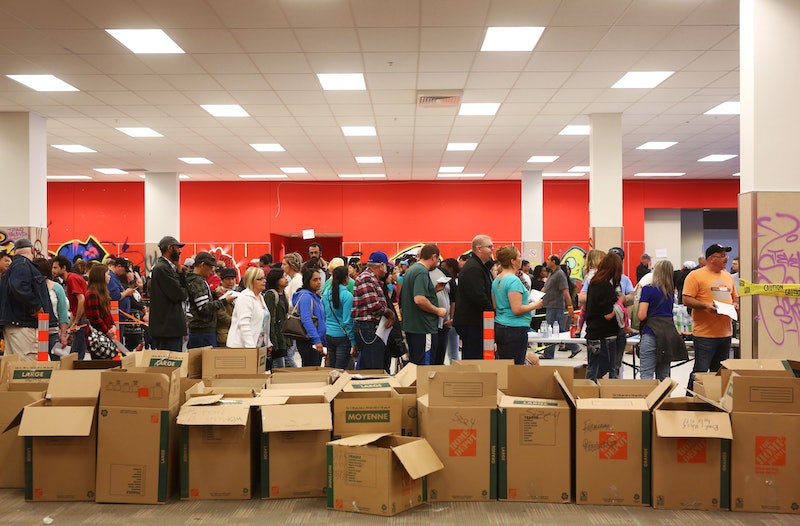 It's quite likely by now that you've heard about what happened in Fort McMurray in Canada last week. On Tuesday, May 3, wildfires began raging through the Alberta municipality, spurring widespread evacuations. More than 90,000 people were chased from their homes by the blaze, according to the CBC, and a staggering 2,400 homes were burnt down. The threat isn't over yet, either, with multiple fires still burning and thousands of people still living in disaster shelters. In short, if you're able to, here's how to help Fort McMurray wildfire victims.

There's a laudable human impulse at times like these to want to help out. When natural disasters like these occur, people with the means to do so will often contribute their time or money to try to improve things. Unfortunately, such disasters also provide an opportunity for scammers to prey on the well-intentioned ― as CTV News reported on Friday, Canada's Competition Bureau is cautioning would-be donors about fake charities popping up, aiming to profit off the Fort McMurray tragedy.

Also, if you're not donating money, it's important to think about what you're giving, as unusable items can clog things up, needlessly diverting the attention of volunteer workers. Basically, if you'd like to donate, you need to know you're donating something that's needed, and that you're dealing with a reputable organization. Here are some safe, well-established options.

1. Donate To The Canadian Red Cross

The Red Cross is always at the forefront when it comes to raising money and providing aid for victims of large-scale natural disasters, and they're able to provide material support on a level not many organizations can. The Canadian Red Cross specifically is currently calling for donations to help with the situation in Fort McMurray, and according to their website, anything you donate will be matched by the Canadian government, effectively doubling your giving.

As Elise Stolte and Keith Gerein of the Edmonton Journal helpfully detailed on Friday, the Edmonton Emergency Relief Services Society hands out a set list of items to people evacuated by the Fort McMurray fires, and they could use some additional supplies ― baby formula, underwear, laundry detergent, plus-sized clothes for men and women, and towels are on the high-priority list at the moment, according to their last update. It's worth noting that their needs will probably change as the days and weeks go by, however, so be sure to check their Facebook page for any updates before donating.

3. Donate To The Edmonton Food Bank

The Edmonton Food Bank is yet another worthy recipient of any cash donations or resources you're able to contribute. They have a Facebook page that lists the items they need most, with the current front-runners being toilet paper, deodorant, toothpaste and toothbrushes, canned meats, and pastas. Once again, it's important to check in at the page before making any donations, in case what they need has changed by the time you get around to it ― it's good to avoid wasting resources at times like these.