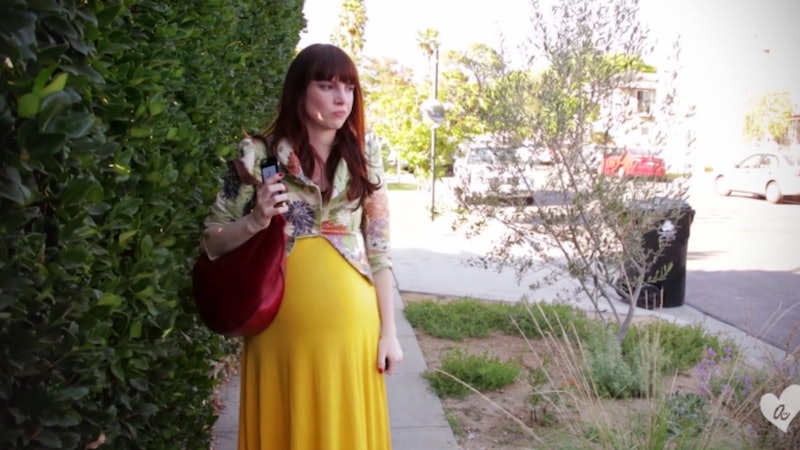 If you've ever waddled your way through the final stretch of pregnancy before, you're undoubtedly aware that the struggle is very real when you have an encumbered uterus — which is precisely why you're going to want to check out Kestrin Pantera's webseries, Knocked Up Thoughts. 'Cause, folks, she gets us. She quite literally feels your pain, since she filmed the series while super pregnant. So while the first episode will likely give you steering-wheel-claustrophobia flashbacks, it will also fill you with the peculiar satisfaction that can only come from someone having been in your (super comfortable, extra wide, maternity-approved) shoes.

The writer/director behind the award-winning feature film, Let's Ruin It With Babies , Pantera named the web series after a hashtag she started using during her first pregnancy "to document what it's like for a grown-ass adult to suddenly feel like a farm animal," she said according to Laughing Squid. Yep, that sounds about right, eh, uterus-having parents? Thankfully, she survived that harrowing experience and lived to tell the hysterical tale(s). In fact, she went on to go through it again, filming all six episodes of Knocked Up Thoughts while she was pregnant with Baby No. 2. This brings us to "Car Issues," the first episode of the series.

In the short, a 37-weeks-along Pantera exposes a struggle every pregnant person I've personally known can relate to — especially those with small cars, like Pantera's Mini Cooper. Is there any way to get in a car gracefully when preggers? Between fumbling with fishing your keys from the bottom of your purse, inevitably dropping them the moment you manage to pull them out, doing the seemingly endless song-and-dance it takes to pick them up and open the damn door, and the epic battle that is reaching your seatbelt and getting it buckled, it would be entirely understandable if pregnant people opted out of driving anywhere. Ever.

Pantera perfectly captures this comical (after-the-fact) cons of being knocked up. It's so real, you can't help but laugh... quite possibly to keep from crying if you're currently sporting a burgeoning belly.

If you're dying to watch the rest of this series, head over to Awestruck and AwesomenessTV. You can also download the Go90 app to catch every second of Knocked Up Thoughts' hilarity. And if you need more Pantera humor after binge-watching the spot-on web series — which I suspect you will — you can watch Let's Ruin It With Babies here.