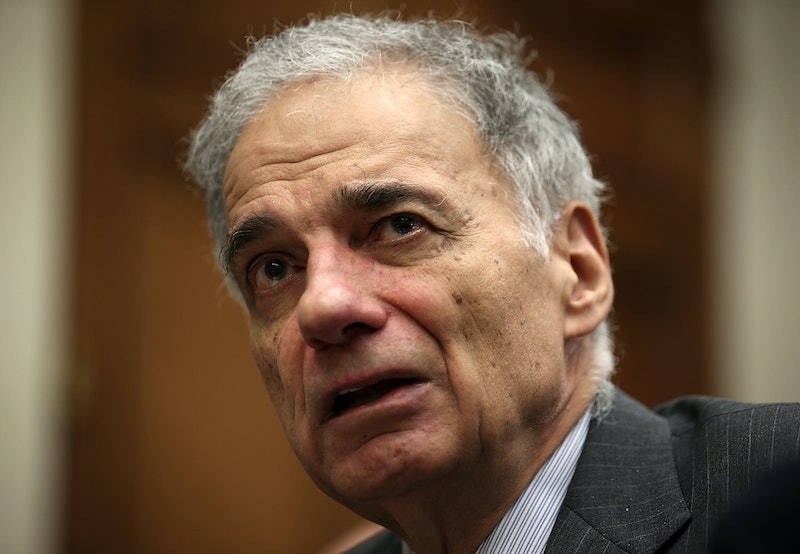 Professional corporate gadfly Ralph Nader is breathing new life into one of the most pernicious but flatly untrue claims of the 2016 campaign. In an interview with U.S. News & World Report, the former presidential candidate said that Hillary Clinton is only winning the Democratic nomination due to the party’s “dictatorship” — that is, superdelegates. Nader’s implication that superdelegates will swing the nomination to Clinton is factually incorrect, as some quick math reveals, and that’s not the only thing wrong with his analysis of the race.

"[Clinton]’s going to win by dictatorship,” Nader said. “Twenty-five percent of superdelegates are cronies, mostly. They weren't elected. They were there in order to stop somebody like Bernie Sanders, who would win by the vote."

Let’s be clear about this: Clinton is not winning the Democratic nomination due to superdelegates. She’s winning because she has more pledged delegates than Sanders (about 300 more), and the reason she has more pledged delegates is that she’s received three million more votes than he has. Sanders would not “win by the vote,” as Nader said; the vote has already been taken, and he isn't winning. These are mathematical facts, not topics for debate.

Nader also said that Sanders would have won the nomination if all states had open primaries and caucuses (in which everybody can vote) instead of closed contests (in which only registered Democrats could vote). That’s pure speculation, of course, but there’s a germ of truth to it, as Sanders has indeed done better in open primaries than closed ones.

But it wouldn't necessarily be better for the party to hold open primaries in every state. The problem is that they can be infiltrated by voters who want to undermine the party. This is precisely what happened in the West Virginia primary, where one out of three Sanders voters said they'd vote for Donald Trump in the general election.

Nader was critical of Clinton in the interview, calling her a “corporatist, militarist Democrat.” He also had some nice things to say about Trump, explaining that the billionaire “funded himself and therefore attacked special interest money.” Here, too, Nader had it wrong. The majority of Trump’s funds have come from donors, not himself.

Ultimately, Nader refused to say which candidate, if any, he’d support in November. There’s nothing wrong with supporting Sanders over Clinton, but Nader is doing more than that; he’s spreading falsehoods. If Nader truly despises the media’s “vacuous, wild, charge-counter-charge, slur-and-slander,” as he claims, he might want to stop granting legitimacy to outlandish and inaccurate arguments.