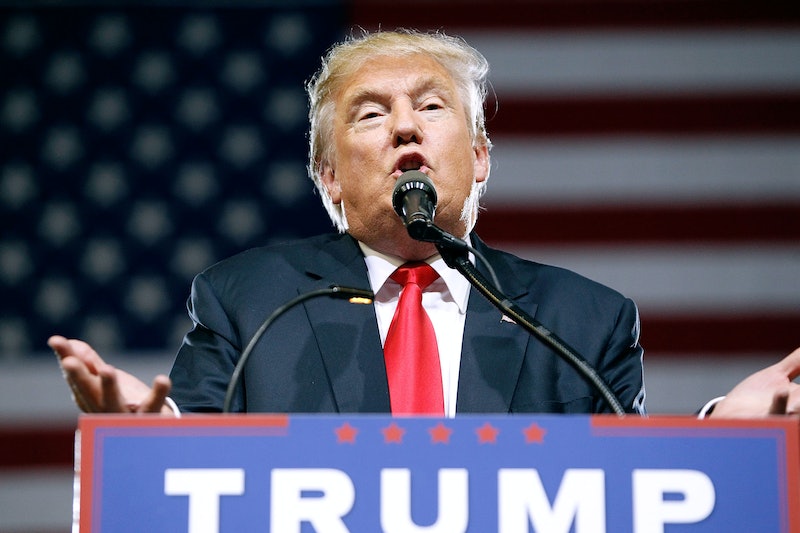 One of the most popular hashtags on Twitter this campaign season doesn't even have a candidate or party name in it. It is #MovingToCanada and variations on that theme. Even if most Americans vowing to pack up and head north if their candidate of choice doesn't become president won't actually act on it, enough of them are tweeting about it that The Red Pin, a Canadian brokerage company, caught notice. And unlike the Americans tweeting about #MovingToCanada that haven't even bothered getting a passport, The Red Pin team actually did something about it.

The Red Pin's creative team made a webpage that tracks Americans' tweets about vowing to move to Canada. As it notes on the webpage, The Red Pin tracks tweets that state:

"Since March 1, there has been an enormous outpouring of thoughts and opinions on Twitter regarding politics, and specifically about moving to Canada," Kip Wright, a member of the creative team for The Red Pin, tells Bustle in an email. "With the amount of controversy involving the candidates, we really wanted to capture how people really feel about what is happening, and Twitter is a great place to look."

And it's a lot of people feeling a lot of things (e.g., anger, outrage, resentment, etc.), though The Red Pin hasn't counted exactly how many people that is exactly. "There isn't an exact number of people involved in the study," Wright says. Since the company is tracking all tweets, Wright argues, "essentially, it's the entire corpus of Twitter." According to Twitter, there are 310 million monthly active Twitter users.

"We first started the analysis with tweets occurring before and after the first Super Tuesday," says Wright. "Since then, our live-feed has been collecting all tweets mentioning #MovingToCanada." The Red Pin noted certain patters, like the most tweets per 100,000 residents using #MovingToCanada came from Washington D.C. and the fewest came from Wyoming.

The Donald may be fueling the surge in Northern curiosity, according to Wright. "The percentage of tweets containing terms relating to Donald Trump currently sits at 63 percent. To put this in perspective, the percentage of Moving to Canada tweets mentioning Hillary Clinton is currently 3.9 percent! Since Super Tuesday, people are still vowing to move to Canada and Trump is still the #1 reason for this." At the time of writing, there's been a slight shift: 61.64 percent of all #MovingToCanada tweets mention Trump, while 4.4 percent mention Clinton. Still, Trump is still the dominant subject.

But Jasmine Sandler, a digital marketing strategist and speaker, says there is another way to interpret the moving to Canada tweets. Sandler says that Trump supporters may be using the hashtag to communicate what Trump implies: "If you vote for me, you're going to make America great again, but if you vote for the others, you might as well move to Canada." There may be Trump supporters tweeting about moving to Canada if their candidate doesn't win. The Red Pin brings up this point, as well, in a statement explaining its methodology on its webpage for the tracking: "It should be noted that a phrase being mentioned does not necessarily mean that term is the reason someone wants to move to Canada. Correlation does not imply causation."

However, there's a bigger underlying question: Will all of this tweeting about moving to Canada actually amount to anything?

In 2014, the most recent year on record, fewer than 9,000 Americans become permanent Canadian residents. That doesn't mean that residents of Cape Breton Island, a tiny island in Nova Scotia, aren't hopeful. Their tourism website contains help links for immigrating to Canada, securing employment, doing business, buying and renting property, and more. But chances are Cape Breton is going to stay the way it is.

"If you're a U.S. citizen who's seriously considering permanently moving to Canada and working full-time (and you don't already have family there), you can check your eligibility — it's possible you're eligible for Express Entry programs like Federal Skilled Workers," he says. "This would require different steps and qualifications, like getting the necessary scores on an English language test (even if it's your first language) and bringing over enough money, as the Canadian government does not provide financial support to immigrants newly entering the country. For example, if you're going by yourself, you'll need to be bringing $12,164 in Canadian dollars to qualify."

Wright says applications are also assessed on a number of factors, including education, work experience, age, employment status, how likely one is to stay in Canada, and one's French and/or English skills."

If you're not dissuaded yet and still seriously thinking of moving to Canada, Wright says you should start by visiting the Canadian government's immigration website. This is no tourism website. There is a lot to read, and there are no scenic pictures. First, try determining your eligibility. Are you eligible for Express Entry? Are you a start-up entrepreneur or an investor? Do you have family to sponsor you?

Assuming you meet the eligibility requirements, you will want to read about how to come to Canada and how to prepare for life in this new country. You need to know how to get your credentials approved if you're in a licensed field and improve your English or French skills if neither is your native language.

And let's not forget actually choosing a city. Just like in the United States, Canadian cities each have their own distinctive character and lifestyle. Are you a Toronto, Montreal, or Vancouver woman? Or would you prefer a medium-sized city, like Ottawa or Calgary? Is small city life the life for you? Perhaps you should look into Charlottetown or Moose Jaw. Rural life also is an option.

But your research won't end at choosing your new city. You have to find an apartment or house. You have to acquaint yourself with basic facts about the weather, geography, regional culture, the government, laws, the economy, national history, human rights issues, etc. Boy, this is beginning to sound more and more complicated, isn't it?

Sure, the Canadian government's immigration website is full of resources to make your transition to life in the new country a little easier, but there's a lot to learn. There's a lot to download, bookmark, read, and print out. Then, there's the process of actually picking and leaving everyone and everything you know in the United States.

More like this
What Is Barack Obama’s Net Worth? He Makes *Way* More Now As An Ex-President
By Hugh McIntyre
Manchester Arena Attack 5 Year Anniversary
By Ella Glover
10 Times Diana & Meghan Spoke Similarly On The Royal Family
By Sophie McEvoy
Michigan’s Governor Is “Going To Fight Like Hell” To Protect Abortion Access
By Andrea Zelinski
Get Even More From Bustle — Sign Up For The Newsletter