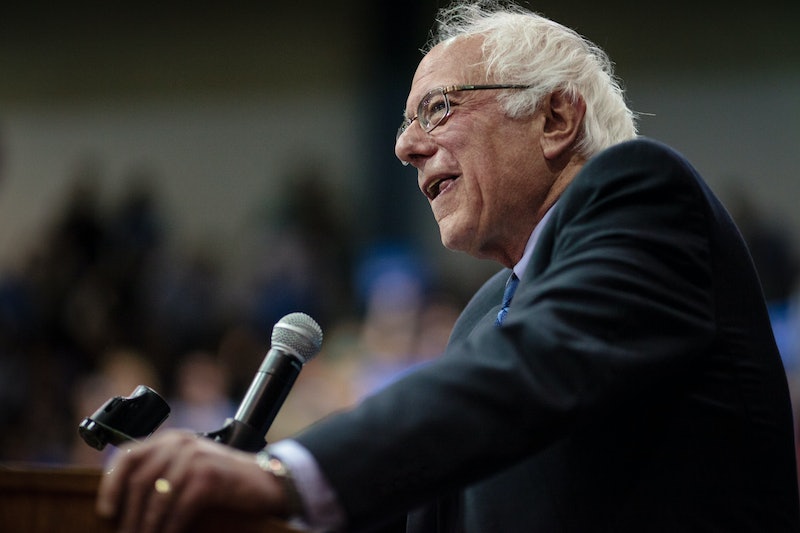 Does the best candidate for American women have to be a woman? Not necessarily. Although we often advocate for gender parity in politics, let's not forget that sometimes, a woman with dangerous policies is not the better choice. Exhibit A: Rep. Mia Love (R-Utah) routinely votes against the Affordable Care Act, paid sick leave, mandated paid maternity leave, and abortion rights. Someone who identifies as a woman doesn't always promote pro-women policies. So, what do we do about Sen. Bernie Sanders, who is up against a woman accused of playing the so-called woman card? Well, Sanders has stood up for women's rights in the past, making him a male politician worth a second look.

Earlier this year, feminist leader Gloria Steinem suggested on Real Time with Bill Maher that young women voters are going where the boys are. "The boys are with Bernie," Steinem said, alluding to then-recent poll data that showed how millennials, including millennial women, supported Sanders over former Secretary of State Hillary Clinton.

What makes those young voters so undecided? Well, it might be Sanders' track record, which overwhelmingly supports women's rights. Here are five times Sanders has supported women's rights throughout his political tenure:

Sanders has an 100 percent rating from NARAL Pro-Choice America for a reason: He has a lifetime congressional record for voting in favor of safeguarding reproductive rights. Sanders supports legal and affordable access to abortion, including repealing funding and insurance barriers to abortion; federal funding for family planning services, including all forms of contraception; requiring all pharmacies to fill prescriptions for birth control; urging emergency contraception to be given out at military facilities; and funding for the United Nations Population Fund, which provides services for family planning, HIV, and maternal health care worldwide.

Sanders has long been an advocate for mandated paid family leave for U.S. workers (America is one of the only nations in the world to lack mandated paid leave for new parents). At a campaign stop in Iowa earlier this year, Sanders said: "In my view, and I have to say this is a fairly conservative approach, every worker in America should be guaranteed at least 12 weeks of paid family and medical leave. [I]t would be a huge step forward for our country and provide enormous relief for millions of our families."

During the first Democratic debate in October 2015, Sanders expanded on how unfairly American working mothers are treated: "You see every other major country saying to moms that, when you have a baby, we're not gonna separate you from your newborn baby, because we are going to have medical and family paid leave, like every other country on Earth."

Also in 2015, Sanders cosponsored the Family Act, which would ensure that new parents have at least 12 weeks paid leave following the birth of their child. Sanders has repeatedly called his bill, and paid family leave in general, "a family value."

Sanders was one of the original supporters of the 1994 Violence Against Women Act (VAWA), which was drafted by another pro-women politician, then-Sen. Joe Biden. "Mr. Speaker, it is disturbing that the death of Nicole Simpson, a tragedy affecting the rich and the famous, should be necessary to force us to take notice of the horror of domestic violence," Sanders said in a speech on the Senate floor in 1994 during a debate on the federal crime bill. Sanders argued for VAWA to be included and passed with the crime bill.

Equal Pay For All American Women

As a senator, Sanders has voted in favor of the Paycheck Fairness Act, which was reintroduced in Congress in 2014 but blocked by Senate Republicans. After the (mostly male) Republicans blocked the bill, Sanders released this statement that, funny enough, also advocated for gender parity in politics: “If the U.S. Senate had 80 women rather than 80 men as it does now, this bill would pass immediately. It is absurd that women receive 77 cents for every dollar a man makes."

In December 2015, following the decision not to indict officers or employees at the county sheriff’s office where 28-year-old Sandra Bland died in custody, Sanders released a statement decrying the justice system and police violence against women of color. Sanders said:

Sandra Bland should not have died while in police custody. There’s no doubt in my mind that she, like too many African-Americans who die in police custody, would be alive today if she were a white woman. My thoughts are with her family and loved ones tonight. We need to reform a very broken criminal justice system.