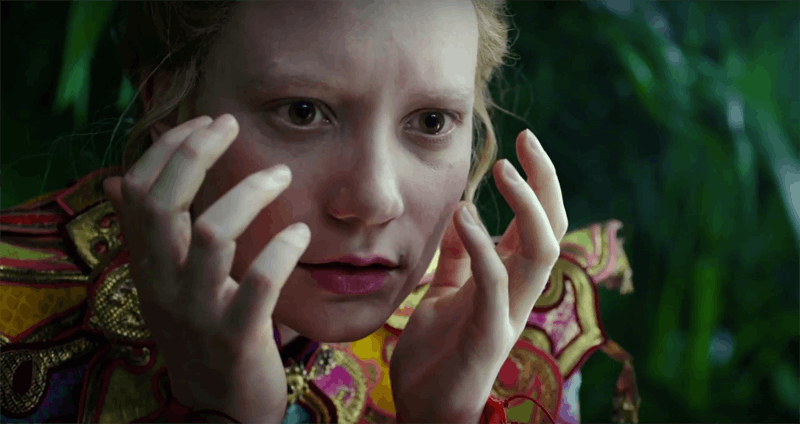 Despite boasting starry talent like Mia Wasikowska, Helena Bonham Carter, Johnny Depp and Tim Burton (producing not directing this time around), the Alice Through The Looking Glass reviews so far have been chiding enough to have the screenwriters responsible for the movie bolting for the nearest mirror to climb through. However, despite it's one star Rotten Tomato rating, I'd still argue that Alice Through The Looking Glass is a must-see for feminists. Why? For one reason you'd never usually associate the Alice In Wonderland franchise with — being realistic about its protagonist.

And sure, the scene in question is a departure from anything you'll ever see on the pages of the book Alice Through The Looking Glass. But, when viewers see Alice strapped to a bed in an insane asylum, with a male doctor diagnosing her ("Let me see. Excitable, prone to fantasy: Textbook case of female hysteria.") the intrusion of reality onto the utopian vision of Alice operating in Victorian society — captaining a ship, sailing around the world — is a suitably sobering and necessary one. We can all enjoy Alice's adventures on the other side of the glass. We expect fantasy in that realm. But the depiction of her career seems far more fantastical than anything we see through the looking glass.

From this perspective, it's actually strange that Captain Alice wasn't diagnosed with hysteria earlier, given how singular her dealings in the business world would have been at the time. During the Victorian era, "hysteria" became a catch-all diagnosis for any irregularity a woman demonstrated. According to Psychology Today "Anxiety, sleeplessness, irritability, nervousness, erotic fantasies, feelings of heaviness in the lower abdomen" were all seen as symptoms of hysteria. Alice's chaining to the bed recalls the famous rest cure in which patients were "allowed no stimulation," according to The Guardian, which was a "cure" promoted by physicians like Silas Weir Mitchell. The Guardian article also mentioned that this recalls novels like The Yellow Wallpaper in which the rest cure becomes not the cure for Wonderland, but the cause of it — the protagonist of the novel starts to see a woman trapped behind the pattern of her wallpaper only after her prescription.

This framing narrative makes Alice's story revolutionary: It suggests that the plot of the film isn't a fun jaunt into a fantasy world, but is a derisive comment on the treatment of women at the time — that Alice's adventures on the other side of the glass are actually caused by her treatment in the asylum, generated by the sheer uninterrupted boredom the treatment provoked.

As such, I'd argue that the same qualities the film is criticized for — its visual splendor but lack of narrative — are actually a powerful portrayal of a mind in revolt against the rest cure. Watching this movie won't just entertain you, but educate you in a way you're not likely to forget.