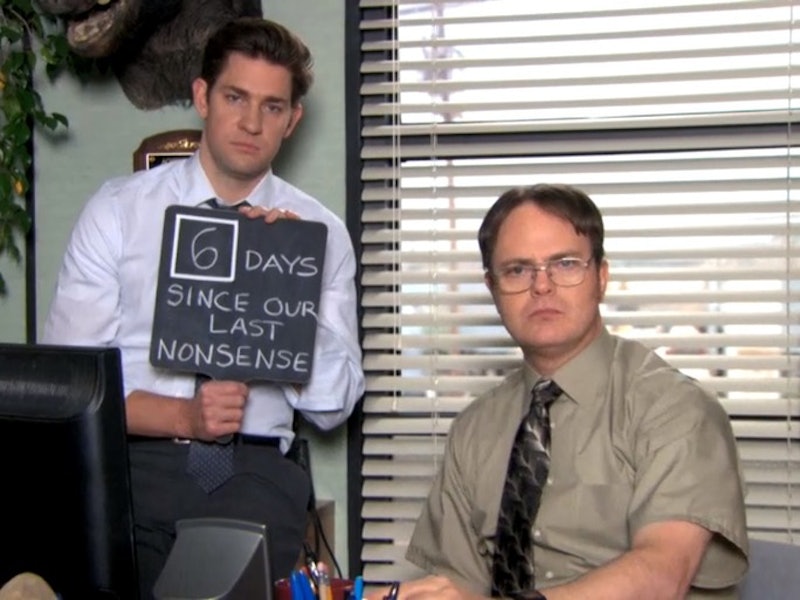 Let's be honest for a minute. The Office was one of the best shows on TV. Ever. I may be a little biased because I am a super-fan of the show (I've seen every season about a dozen times), but you'd be hard pressed to find another show that combined lovably goofy characters, insane situations, and wild dialogue all set within a seemingly mundane setting. The Office is the kind of show that acts like comfort food. You can watch any episode at any point in your life and find a way to relate to it. Repeated viewings let you pick up on the small moments of sweetness, indulge in the ridiculous antics of Michael, Dwight and Andy or even ponder whether Jim and Pam are actually the best couple ever (Answer: they are).

Sound advice, Michael. Words for us to all live by.

2. "Disposable Cameras Are Fun But It Seems A Little Wasteful. You Never Get To See Your Pictures."

3. "I Wish I Could Menstruate. I'd Be More In Tune With The Moon And The Tides."

Dwight's sentiments, while a little insane, are admirable. It's a pretty endearing and feminist sentiment to wish for this part of womanhood... right?

4. "Sometimes The Clothes At Gap Kids Are Too Flashy, So I'm Forced To Go To The American Girl Store And Order Clothes For Large Colonial Dolls."

Can you actually imagine what this transaction would look like in real life?

5. "Every Little Boy Fantasizes About His Fairy-Tale Wedding."

It's not insane for a boy to dream about his wedding, but the way Andy went about planning his wedding was a little bit. If anyone would be a Groomzilla, it would be Andy.

6. “I Am Fast. To Give You A Reference Point I Am Somewhere Between A Snake And A Mongoose… And A Panther.”

Anyone fancy a foot race with Dwight to test this theory?

Meredith was always one to shock us with her sexual frankness, so perhaps this is the most insane thing she has ever said because it's so chilled out. Either way, it's a mantra worth never adopting.

8. "Through Concentration, I Can Raise And Lower My Cholesterol At Will."

One of the bolder claims Dwight made but one of the more minor lines of insanity he gave us.

Phyllis is the best! She knew representation in all things is key. When it comes to cake, we all need to find one that speaks to us deeply.

10. "There Are Too Many People In This World. We Need A New Plague."

Not so fast, Dwight. There are some pretty cool people on this planet.

Forever the voice of reason on The Office, Oscar was spitting some serious truth. Don't do this to your kids.

13. "You Know, A Human Can Go On Living Seven Hours After Being Decapitated."

Dwight's disdain came out in the most unusual ways. It might have been one of the funniest aspects of The Office. His logic led him to saying lines like this and for that, I'm forever grateful.

So, this line in and of itself is not exactly insane but this iconic line usually followed some of the more colorful and innuendo-laden lines. It also got Michael a ton of eye-rolls and groans from his co-workers when he said it at the most inappropriate times.

16. "If You Pray Enough, You Can Turn Yourself Into A Cat Person."

Sometimes Angela's love for her cats blurred the lines between sane and ridiculous but you gotta love her devotion to her feline babes.

17. "Sometimes I Wonder If I Have Ovaries In My Scrotum Because I'm Great At Girl Talk."

Gabe really deserved more love than he got during his time at Dunder Mifflin Sabre. I would have love to have experienced more of his girl talk on The Office.

Who's ready to have a viewing party for The Office tonight? I'm sure there's a ton of lines I've forgotten to list that are way more insane than these and the best way to rediscover them is to re-watch!