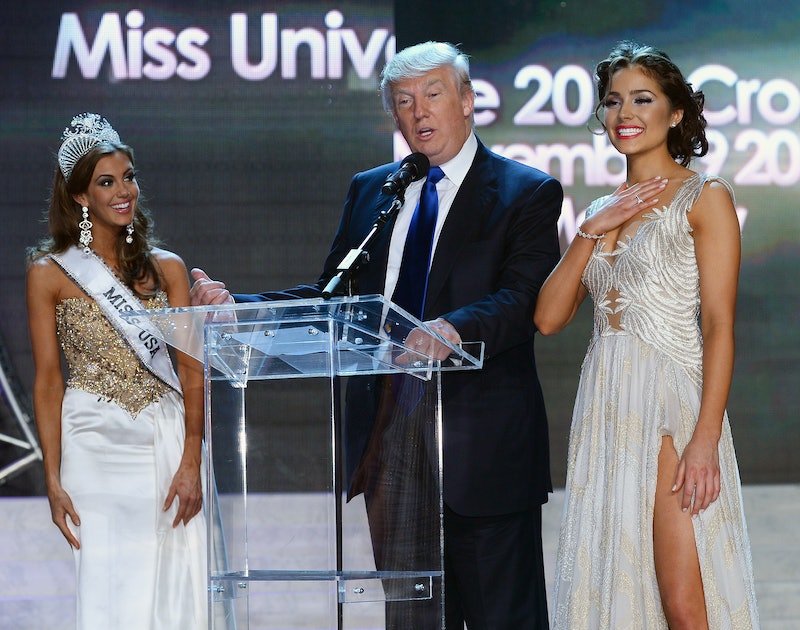 During his bid for the White House, Donald Trump has represented the epitome of old school machismo, repelling many women as far as they can get from the mogul turned presumptive Republican nominee. His sexist comments about women, both in and out of the political sphere, have painted a portrait of a man who, to most women, is anything but charming. But according to a report published Saturday by The New York Times, Donald Trump used to be quite the ladies man (literally) in the days before he thought it was appropriate to use women's looks to hurt their credibility.

And, as the Times notes, that actually might have started this whole mess. At the New York Military Academy, the all-boys boarding school that Trump attended, girls weren't allowed on campus unless it was some sort of special occasion. George White, who was a fellow member of the 1964 graduating class, told The New York Times that Trump was very specific in the women that he brought as his dates to school functions: "Donald was extremely sensitive to whether or not the women he invited to campus were pretty." He further alleged that, "For Donald, it was display." Bustle reached out to the Trump press officials, who have not responded to a request for comment.

That reputation for inviting, as White put it, "very pretty," "very sophisticated," and "very well-dressed" women to the campus eventually earned him the nickname "ladies man" in the yearbook. When The New York Times asked him how he earned the moniker, Trump initially said, "I better not tell you — I’ll get myself in trouble," but eventually allowed that he had a "great like" for women.

That "great like" also might have been prompted his role in the Miss USA and Miss Universe pageants. Pageant contestants that the Times spoke with also alleged that there was unwanted kisses from the mogul as greetings (Trump's camp denies this) and that he once asked the women in the competition to line up in their revealing opening number outfits and inspected them. The alleged exercise (Trump also denies this account to the Times) apparently left many of the contestants in tears.

Ladies man, indeed, Donald. It could be, as his former classmate surmised, that Trump finds value in surrounding himself with beautiful women. But the ladies man turned presidential candidate had better start to understand that women offer more than just their looks.