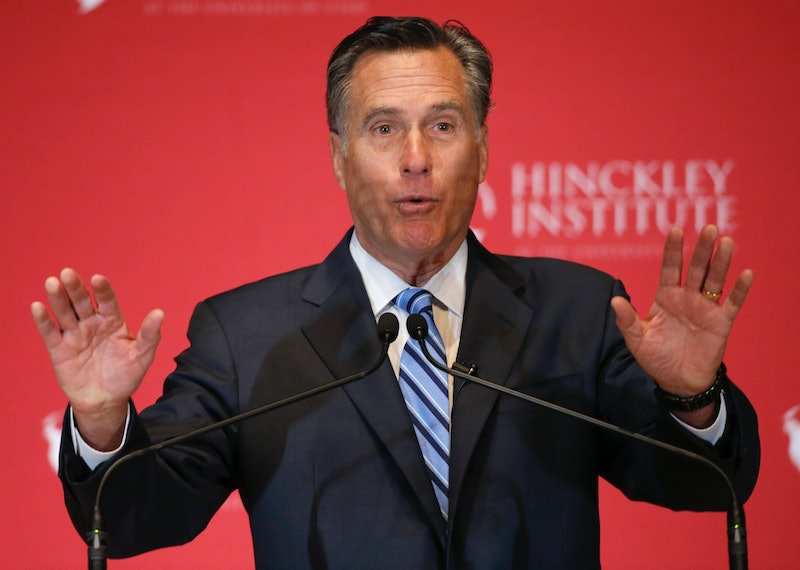 The 2012 Republican nominee hasn't been secretive about his distaste for Donald Trump, but it's starting to be clear how much Mitt Romney doesn't want the Donald to move into the White House. According to the Washington Post, Romney is allegedly helping to secure a third-party candidate to stop Trump. Although this has been a distant possibility, it seems that since John Kasich and Ted Cruz dropped out of the race, leaving Trump as the presumptive nominee, Romney and other GOP insiders have redoubled their efforts to find a dark horse.

According to the Post, which spoke with a dozen of the people involved, Romney and a group of other Republican stargazers are allegedly commissioning private polling data, looking into funding sources, and weighing out other could-be candidates. The paper reports that commentators William Kristol and Erick Erickson and strategists Mike Murphy, Stuart Stevens, and Rick Wilson are allegedly among the Republicans helping out with the effort.

The Post notes that the group's top recruiting picks are Ohio Gov. John Kasich and Nebraska Sen. Ben Sasse, who Romney allegedly has personally courted in the past few days. Other political picks were floated earlier, and it seems that the group even floated the possibility of picking its own businessman-turned-reality TV star, Shark Tank host Mark Cuban. But in an email to the Washington Post, Cuban said: "I don't see it happening."

So, it seems that the #NeverTrump movement is alive and well, with a handful of GOP players hesitant to switch out the hashtag with #ImWithHer. And they'll need to be committed to the cause, because there is a tough road ahead for any possible third-party candidate. As the Post notes, former New York City mayor Mike Bloomberg previously flirted with the idea of a third-party candidate, dumping a lot of money into the effort, and said in March that there was no possible path for his would-be campaign.

Beyond a money issue and being able to break into the public consciousness enough for a plausible run, there are also logistical hurdles that any third-party candidate would face entering the race this late in the game. As the Washington Post pointed out, the deadline to file in big grabs like Texas has already passed, but the group told the paper that they believe they could win a legal challenge to secure a candidate's spot on the ballot.

Furthermore, a viable third-party candidate could further divide the GOP, effectively handing the presidency to likely Democratic nominee Hillary Clinton. Becoming the candidate who won the race for Clinton wouldn't exactly do wonders for anyone's political career, and, as the Post put it, could turn them into a political "pariah."

It's unclear how this will turn out, but if anything, it does add fuel to the argument that many Republicans don't believe Trump is worthy of the GOP nomination. As with all things in the 2016 election, this will get interesting.