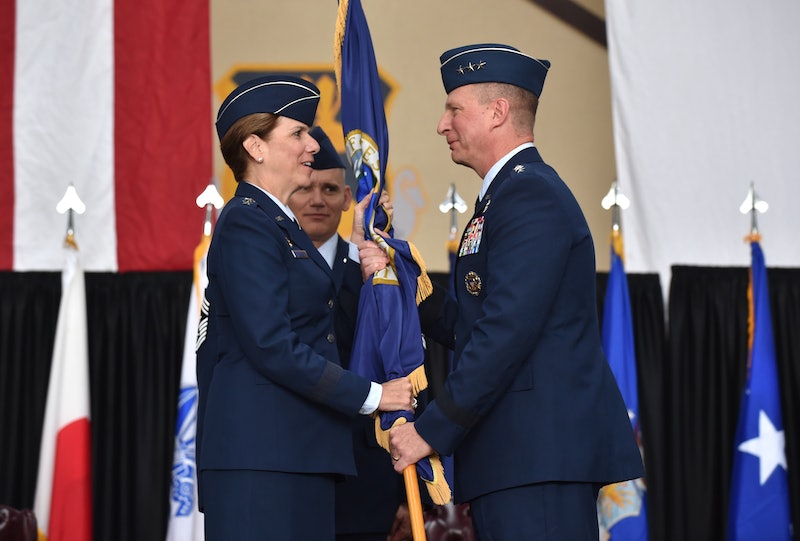 It was with four short words that Air Force Gen. Lori J. Robinson became first woman to lead a U.S. combatant command and made history; "I have the watch," Robinson said as she assumed command of both the North American Aerospace Defense Command (NORAD) and the U.S. Northern Command in Colorado in a ceremony at Peterson Air Force Base that made her the first woman to lead a top-tier U.S. war fighting command. But busting through glass ceilings (or perhaps they are brass ceilings in this case) isn't exactly a new hobby for Robinson.

After beginning her military career through a college ROTC program in 1982, Robinson rose through the ranks over the years to become one of only two four-star female generals to ever serve in the Air Force. She was the first woman to ever command the 552nd Air Control Wing in 2007 and the first woman to hold the title of commander for the Pacific Air Forces. Earlier this year, she was named one of Time magazine's 100 Most Influential People for her role in blazing a new path for women in the U.S. military. And on Friday she made history yet again.

But it wasn't her gender that motivated President Barack Obama to nominate Robinson to replace Adm. Bill Gortney back in mid-March. In announcing her nomination during a Politico Playbook Breakfast, Defense Secretary Ash Carter cited Robinson's "very good managerial experience" and "very deep operational experiences running the Air Forces in the Pacific." Carter said the president's decision to nominate Robinson was proof "we have coming along now a lot of female officers who are exceptionally strong."

At her installation ceremony in Colorado on Friday, Carter again reiterated it was Robinson's impressive qualifications that had landed her the position, praising her as a strategic thinker with the ability to make split-second, life-and-death decisions. "She was selected because she was the most qualified officer," CNN reported that Carter said. "I hope that the excellence she represents is an inspiration to women to join our armed forces." Speaking at the ceremony, Robinson said it was humbling to be selected to take charge of NORAD — which, along with monitoring air and naval approaches in a joint operation with Canada, also mans the extremely popular Santa-tracking operation every Christmas Eve — and the U.S. Northern Command. "It is an honor. I can't think of a more sacred responsibility than defense of the homeland," she said. "And to be able to do that and be in this level of command is unbelievable."