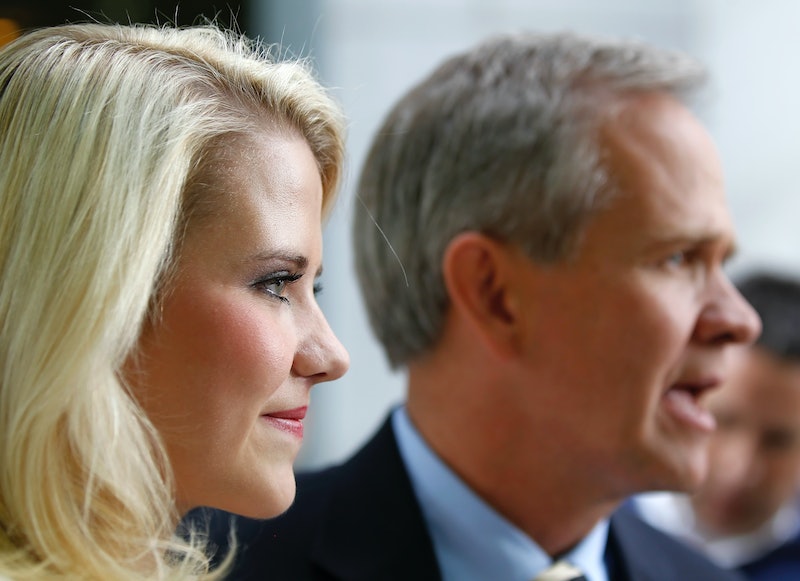 Nearly 14 years ago, a teenage girl was kidnapped from her bedroom at knifepoint and held against her will for nine months in a horrific story of abuse, anguish, and finally hope that captivated people around the country. It was a story that dominated headlines for more than a year, evolving from a gruesome tale of every parent's worst nightmare come to life into an inspiring narrative of strength and empowerment which suggested maybe miracles do happen after all. As the 14-year anniversary of her kidnapping nears, you may be surprised to learn what Elizabeth Smart is doing now.

Smart was kidnapped at the age of 14 from her Salt Lake City home by Brian David Mitchel on June 2, 2002. For nine months Smart was held captive and subjected to unimaginable sexual assault until police rescued her in Sandy, Utah, just 18 miles from her home on March 12, 2003. Years later Smart would relive her trauma while testifying against Mitchel in federal court.

But while some might have chosen to firmly close what could have easily been called the worst chapter of their lives for good, Smart would continue to share her story as an active advocate for abuse survivors and missing children.

She launched the Elizabeth Smart Foundation in 2011 to help locate missing children and stop the sex trafficking of minors, and has worked to promote national safety legislation like the National AMBER alert and the Adam Walsh Child Protection And Safety Act aimed at preventing child abductions. Smart also collaborated with the Department of Justice on a survivor's guide for abducted minors.

Now a mother, 28-year-old Smart attempts to live as far from the media's eye as possible while remaining a dedicated advocate for abuse survivors and missing children. The birth of her daughter, Chloe, in February of 2015, for example, went unreported until her father spilled the news to a local news outlet in Idaho in May. Smart married her husband, Matthew Gilmour, at the Mormon Laie Hawaii Temple in 2012 more than a year after the couple met during a Church of Jesus Christ of Latterday Saints mission in France.

Since her kidnapping, Smart has published a book titled My Story and often appears at events to speak about her story and the importance of continued public awareness and media exposure for abduction cases. This year Smart has been actively involved in efforts to help find Elizabeth Laguna-Salgado, a 26-year-old woman who went missing more than a year ago in Provo, Utah.

Most recently, Smart spoke about the role her faith played in helping her overcome the horror of her kidnapping at the Cannon Activities Center at Brigham Young University-Hawaii. "It's not what happens to us that sets us apart," a local Utah news outlet reported she said Wednesday. "It’s the decisions that we make, it’s the choices that we make, the way we decide to lead our lives — that is what defines what we truly are."