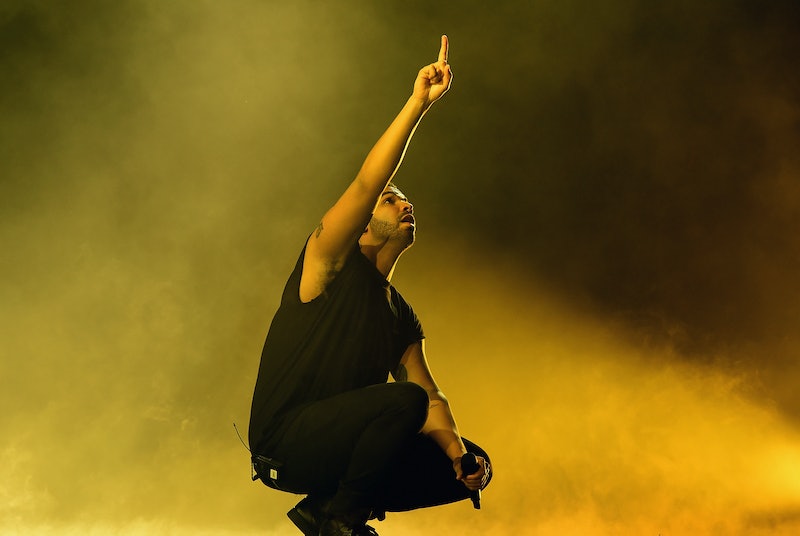 Drizzy may have brought his whole team up from the bottom, but when Drake performed "Hype" on Saturday Night Live, he did it solo. This is a departure from the rest of the episode, where he had help along the way. He was supported by two dancers in his first performance of "One Dance." Fellow comedian Chris Rock introduced it. He even had a little support from Rihanna (aka Drake in a wig), who did a little duet with him during the monlogue. But when he performed hype, there were no dancers, no outside comedians (Aidy Bryant did the intro), no featured guest stars — no nothing. He was up there all alone.

Of course, the set was designed so it wouldn't look so empty. Like his "One Dance" performance, the stage was setup to look similar to the "Hotline Bling" video, with lights and bold colors. Fog enveloped the floor, and it even looked like it was snowing, which was festive. And you know what? He commanded the stage. He actually had more presence performing as himself alone than he did in sketches where he could play bigger characters and have more people to play off of for laughs.

This was fitting, because it was a pretty Drake-centric episode. Moreso than other hosts, Drizzy was the punchline to a lot of the jokes of the evening. His monologue was about the many ways in which he'd been memed. He did a pre-filmed sketch that made fun of his many beefs. In a "Black Jeopardy!" sketch, the host told a Canadian contestant that no one in the United States had heard of Drake before. He even showed up on Weekend Update to critique Jay Pharoah's impression of him.

It makes sense, then, that the show would end with him on stage alone. (Well, it wasn't the last thing of the night — there was one more sketch that actually had Drake breaking and laughing at himself — but the "Hype" performance felt more final.) Even though he's hosted once before, I bet this isn't the last we'll see of Drake on SNL.