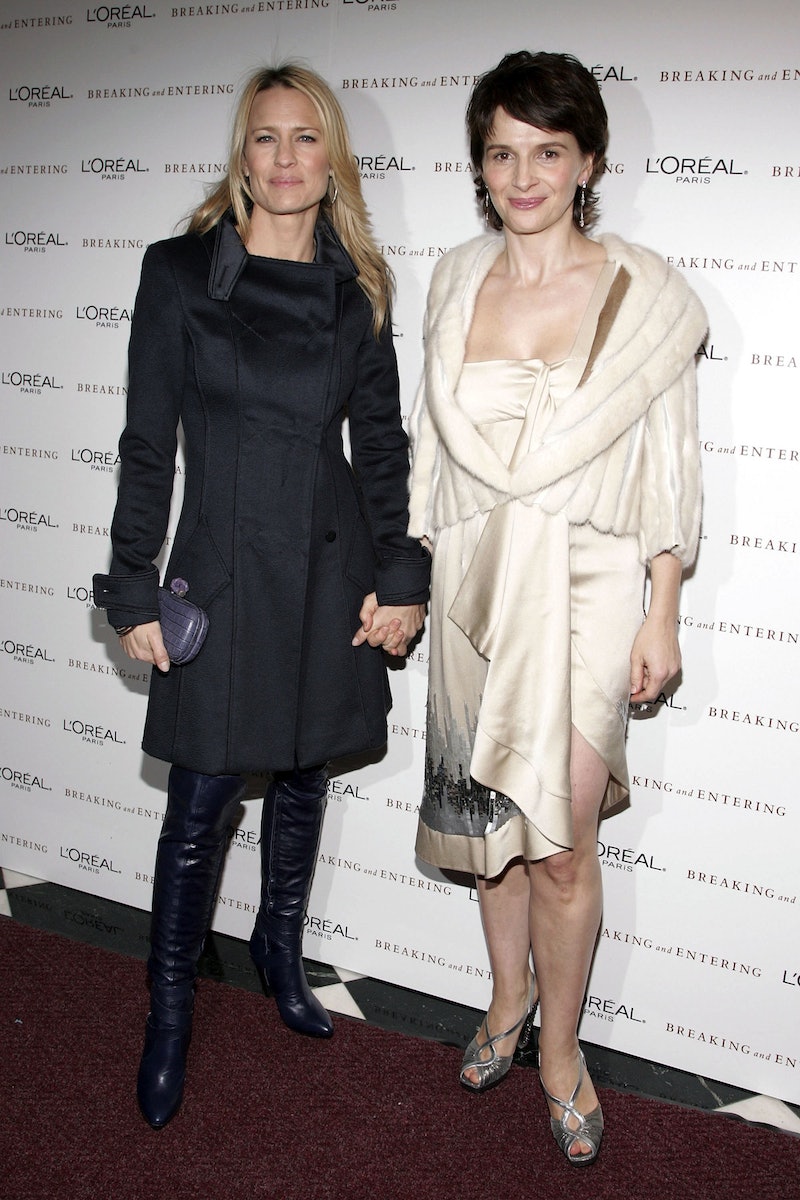 It may be 2016, but that doesn't mean the entertainment industry has become a more welcoming landscape for women. The statistics are still grim — in 2015, the Women's Media Center released horrifying statistics that revealed women made up just 17 percent of directors, executive producers, producers, writers, cinematographers, and editors in 2014 films — but a new non-profit production company is fighting for change. The company, We Do It Together, announced at Cannes that it will be creating its first project, Together Now, with a wonderful crew of inspiring women. This series of seven short films, directed by and starring women, will make up a feature-length film, and the names of the women on-board is thrilling.

The women taking on this project range from A-list stars like Robin Wright and Juliette Binoche to lesser-known filmmakers like Patricia Riggen (director of The 33) and Saudi director Haifaa al-Mansour. Together, these women, plus several others, are coming together to make an intriguing piece of art — and hopefully give the male-dominated film industry a kick in the right direction. Here's a look at all the incredible women involved:

Wright started out as Princess Buttercup in the beloved classic The Princess Bride as a chick somewhat under the control of various men, and now she stars in House of Cards as Claire Underwood, a politician and master manipulator. She also serves as a director on House of Cards and will be directing one of the short films in this movie. Since Wright is an industry veteran, it will be interesting to see someone who's been in front of the male gaze for so long taking control of the camera.

When the Hardwicke-directed film Twilight opened at the box office with $70.6 million in its first week, she took the title of the biggest opening ever for a female director according to CNN. But that's not this director's only girl-power victory. Her 2003 film Thirteen, which she co-write with then-14-year-old Nikki Reed , earned her a directing award at Sundance and an Academy Award nomination for actor Holly Hunter. The movie talks about the perils of being a teenage girl and is a disturbing look at drug use, sex, theft, and adolescence. With this in her resume, it's no doubt Hardwicke will be able to create something incredibly moving for Together Now.

Mexican director Riggen has directed some pretty heavy stuff including The 33, the story of trapped Chilean miners, and Under the Same Moon, the equally heart-wrenching story of a Mexican woman who illegally migrates to the United States to provide for her family. This intimate work leads me to believe she will be able to spin a deeply emotional new yarn.

Matsoukas is Beyoncé-approved, having directed Bey's magical and groundbreaking visual album Lemonade. But there's more to the woman than just that exciting fact. She's also done music videos for everyone from Rihanna ("We Found Love") to Lily Allen ("Not Fair"). It will be so exciting to see what Matsoukas, whose works all seem to have a colorful and not-of-this-world vibe, can do with a short film.

Lund's social justice activism through her films makes it clear that whatever she creates will make you think. The Polish director most recently co-directed City of God, a film about Brazilian crime families, which was nominated for four Academy Awards including Best Director (though she was not included in the nomination, whih went to Fernando Meirelles). Before that, she collaborated on Notícias de uma Guerra Particular (News of a Personal War), which discusses the Brazilian war between the heavily armed drug dealers of the favelas (a Brazilian slum) and the Rio de Janeiro police. Clearly, she's capable of taking on the big leagues.

Szumowska is a prominent European director, screenwriter, and producer who was born in Poland. She showed extreme talent early on, as her short film at university called Silence was ranked 14th in the history of Łódź Film School, according to Culture PL. Since then, she's been nominated for and won awards all over Europe for her films and their ability to look intensely into ordinary humans. Whatever window into whatever world she creates will be fascinating to see.

It really doesn't get much more impressive than being the first female Saudi filmmaker. al-Mansour is no stranger to the short business, as her first three films Who?, The Bitter Journey and The Only Way Out were all prize-winning shorts. She also achieved another first by shooting her debut feature film, Wadjda, entirely in Saudi Arabia. Her work is a definite must-see.

French actor Binoche is slated to perform in one of the shorts, which makes sense because she has been performing in seriously intense stuff since she first got in the scene in 1984. Her first role was in the controversial Jean-Luc Goddard film Hail Mary, which is a modern retelling of the birth of Jesus Christ. Binoche is also well-known for her charity work and activism — she has made her thoughts known on many issues, including protesting the incarceration of Iranian director Jafar Panahi in Tehran's Evin Prison since 2010. Binoche has been a pillar of the entertainment industry for years, so her appearance in the film will definitely add some star appeal.

When Pinto hit the scene as Older Latika in Slumdog Millionaire, it was clear that she was a star. Since then, she's been busy acting in films in India, the United Kingdom, and the U.S. such as Rise of the Planet of the Apes and Trishna. It will be interesting to see the what she'll add to the mix in Together Now.

With all these talented, fascinating, and inspiring women taking part in Together Now, it seems like it will truly be an experience to watch out for. This movie just might end up being the best girl power anthology of all time.