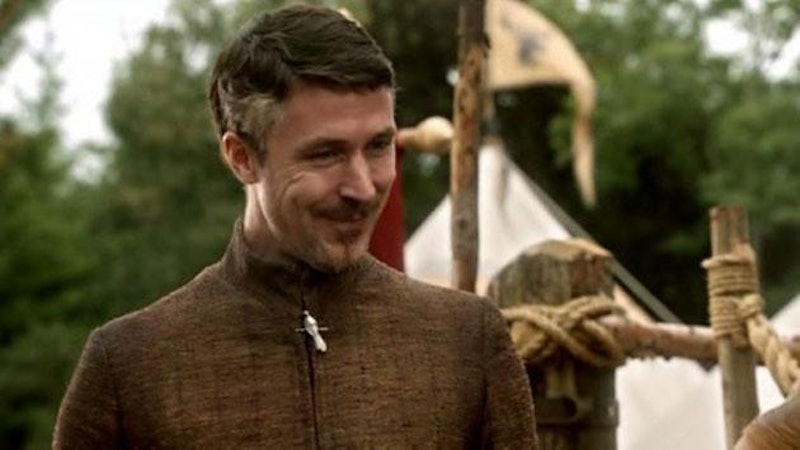 The sixth season of Game of Thrones has so far been missing a major character, but he might make a return before long. Although the first three episodes of the new season of Thrones have not had any Littlefinger, the slimy King's Landing gossip otherwise known as Lord Petyr Baelish, actor Aiden Gillen has hinted that he might come back soon. All signs point to Lord Baelish returning in Sunday's episode of Game of Thrones, entitled "Book of the Stranger," and Gillen told Entertainment Weekly that it's very possible Littlefinger will come back soon — for a journey all about atonement. Said the actor,

For me, this time out, there’s a level of atonement in relation to Sansa and my misjudgment of Ramsay Bolton. A lot of what I’m up to is atonement and really trying to align myself the right people – though, I guess, I’m always doing that! I left Sansa married to a psychopath. It’s probably the one time we’ve seen Littlefinger slip up. He really didn’t know about him. He should have.

Clearly, Littlefinger isn't sitting this season out, as the promo for Episode 4 briefly features an appearance from the character discussing Sansa's escape from Winterfell. Littlefinger's reappearance is especially interesting considering his arc last season; while never a particularly heroic or morally upright character, Baelish committed the major crime of betraying Sansa by matching her up with the psychopathic Ramsay Bolton. After leaving Sansa to her fate (or so he might have thought), he basically vanished. What he will be up to this season will remain a mystery until Sunday's episode airs, but Gillen's details about his character's journey in upcoming episodes do provide some insight into his emotional state.

Contrary to what some viewers might have thought, Gillen believes that Littlefinger was uncharacteristically unaware of all the dynamics at play when he helped arrange the marriage between Sansa and Ramsay and did not know the extent of Bolton's cruelty. It definitely looks like he'll be appearing in the upcoming episode of Game of Thrones, but whether his attempts at atonement will be successful will remain a mystery.