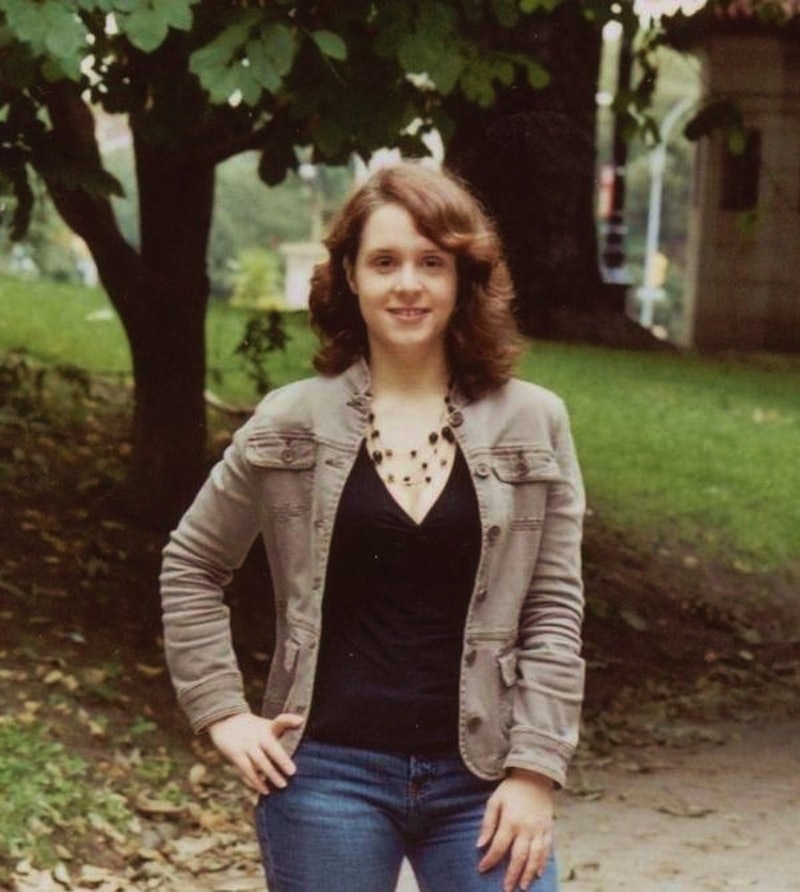 "Don't flash your cash," my dad warned me as he dropped my best friend and I off at the mall. At 11 years old, the extent of my wealth was $10 in babysitting money, but I heeded his words. And when I started visiting New York City alone in my mid-twenties, traveling from my suburban Philadelphia home, I followed the advice I had been given for how to stay safe: be aware of your surroundings, avoid sketchy neighborhoods at night, keep $20 in "mad money" with you at all times in case you need a cab, and trust your instincts. But, on a steamy July afternoon in 2004 in an affluent neighborhood in Brooklyn, no advice was enough.

I had just arrived in the city, excited to spend the following week cat-sitting, seeing one of my favorite bands play and solidifying the details of an internship I would begin in the fall. Rain crashed into the pavement as I dashed from the subway to the red brick apartment building where I was staying. I didn't mind getting wet, though. Finally well after years of living with Lyme disease, I was happy just to be there. I had been given a second chance.

A man in a bright red t-shirt and baggy jeans ran up behind me just as I had turned the key in the exterior door. Like me, he was soaked. We both entered and proceeded to wait for the clunky, slow elevator to descend. He calmly stood beside me, my black purse inches away from his reach. He seemed like he belonged there.

As a highly sensitive and intuitive person, I always thought that I would sense danger when it was present. But some monsters show their teeth in a smile.

I boarded the elevator and pressed the button for the third floor. He pressed #2. As soon as the doors closed, he pushed behind me, pinning my arms to my body with his meaty forearm. I tried to bite him and stomp on his foot. For every move I made, he had a countermove. He dragged us both to the ground. My black backpack positioned me like an upside-down ladybug, but gave me some leverage. His hand grasped my throat, fingernails digging into my windpipe. I attempted to use my keys against him, but he knocked them away. I tried to plunge my fingertips into his eyeballs. I clawed at his scalp, memorizing the bristled texture of his short hair. At last, I kicked him in the face with my sneaker. Years of yoga and bike-riding had made my legs strong and flexible.

Angry, the attacker stood up and punched my face. My cheek turned with every blow. My thoughts drifted to my mom, Tori Amos lyrics, and how ugly the elevator ceiling was. When he began to unbutton his pants, I silently comforted myself as if talking to a child. I only had one thing to do: survive. I flailed my arms and legs, which complicated and thwarted his mission. By some miracle, just as I was about to lose consciousness from being hit in the head so many times, my hand hit the buzzer on the side of the wall. The noise startled him. He released my neck long enough for me to utter in a hoarse whisper, "Take my money." It was the only thing I could think of to get him to leave. He paused and considered it as if for the first time. The elevator had already traveled to the third floor. He grabbed my purse and ran as the doors opened. I tried to go after him, but collapsed, bloody and shaken, into the hallway.

As a highly sensitive and intuitive person, I always thought that I would sense danger when it was present. But some monsters show their teeth in a smile. It can be impossible to know the truth of a moment until you're in it. Trusting your instincts often relies on a basic premise that people who wish to do harm will give subtle signs, but often practiced criminals or those with psychopathic tendencies hone the ability to hide these clues.

I was aware of my surroundings. I didn't display wealth or even anything worth stealing like a cell phone. I was dressed in jeans, a maroon shirt, and sneakers. A small rose quartz pendant dangled from my neck. This happened in broad daylight in a semi-public place. I simply was at the wrong place at the wrong time. The attacker looked for an easy opportunity and found what he thought was one in me.

Instead of trusting my instincts to avoid to an unexpected, horrific situation, I learned to trust them during it. I remained calm and methodical. When one tactic didn't work, I quickly tried something else. My body took over to protect me because I had made her strong. I gave myself permission to fight back and with it, found the strength to live.

Adrenaline still coursing through my veins, I tried to get up to go after the attacker after he fled when the elevator reached yet another floor. I collapsed into the building’s small hallway, bloody and shaking. A woman who lived on the floor heard me say through tears, “He tried to kill me.” Holding her young son, she dragged me into her place while I frantically tried to tell her my name and phone number since I was on the verge of passing out. The attacker had my purse with my ID. I knew no one would know who I was or how to contact my family. I lay on her hardwood floor until the police came. An ambulance took me to the hospital. I remember feeling frustrated that one of the people on the scene kept referring to it as a robbery. It was, but that was not the attacker’s primary intent — I had to tell him to take my purse.

I called a friend who was about to board a plane to Nashville and told him what happened. His was one of the few phone numbers I could remember—my mind now scattered with pieces of my former self. He cancelled his flight and came to be with me until my parents could arrive. He made silly jokes in the examining room and though I didn’t feel much like laughing, it helped to lighten the mood. I was treated for my injuries and many hours later, went to the police station to look at mug shots. After over two hundred photos, the faces began to blur. I hadn't seen the attacker's image amongst them and could do no more.

During the initial days after the trauma, I first felt scared and stunned—I knew my life had forever changed. I began to feel invincible. I had counseling from victim’s services and watched as the bruises on my face and neck slowly faded. It took longer for the attacker’s fingernail marks to vanish from my throat, which bothered me every time I saw them. The indentations of where his fingers had been made it all more real. Twelve years later, I still have trouble thinking of him as a person with a name and parents and a life. Instead, he remains a strange figment in my mind that only existed in those moments. It overwhelms me to know that his kind of rage, his kind of evil exists in the world.

Six weeks after the attack, I returned to the city to visit. I constantly had to grip physical surfaces—the back of the seat in front of me on the bus, the sticky cool pole on the A train, the tassel on the zipper on my bag—to keep myself grounded in the physical realm. My terror and the feeling of being in a daze threatened to unhook me from gravity’s grasp.

I was scared all the time, but pushed through it to reclaim what I wanted—to live in New York City. I had started to reacclimate and felt better as the weeks went on. But, during a visit in December of that year, I saw the attacker outside of a bodega near where I was interning/working. Our eyes locked when I was in the middle of crossing the street go to the store — I know he recognized me. It was like being attacked all over again. He waited for me to exit the store, so in order to prevent him from realizing that I knew who he was, I did one of the hardest things I've done — I smiled at him and acted like he was just another random stranger. I called the police a few hours later. I deeply regret not calling them right away, but it was a reaction to the trauma, one of many that would color my life from that point on. I ended up going on a stakeout with the police, but he was never caught to my knowledge.

The attack completely changed my ability to feel safe in the world — and my ability to know when I was safe. My response to the trauma morphed, changing the shape of my mind, of my nervous system. Initially, I felt powerful, but as time went on, I felt more vulnerable than ever. For the first two years, I felt numb — like I was on the other side of glass, hands pressed up against a world I could see, but not touch. I had therapy which helped, but the effects of the trauma linger in how my body responds to the world — even now, many years later. No boyfriend has ever been able to kiss my neck. And I can’t stand people I don’t know in close proximity behind me. Insomnia has been the norm and I can’t believe it was a total coincidence that I developed a chronic illness that affects my nervous system. Constant low level hypervigilance—something that is so profoundly common amongst women I know—is exhausting.

Another lasting impact is the empathy I feel for survivors of violence, like the survivor in the recent Stanford rape case, and the sense of injustice I feel for how common — shockingly common — these kinds of incidents are. Since I was attacked, I have heard countless stories from people I know, some told boldly and publicly and others told in whispers, that begin with “Something like that happened to me/my sister/my friend. . .”

I have a visceral reaction against seeing stories in the news of violence against women. I want the stories to go away—not because I don’t support the women—but because I so desperately want to live in a world where these narratives don’t exist at all for anyone. I can only hope that with each survivor who speaks out—or who simply goes on to live a life despite the way trauma kills a little part of you—that we move closer to that world. Until then, I fight back every day by rising towards joy, ever closer to what makes me feel alive and whole.