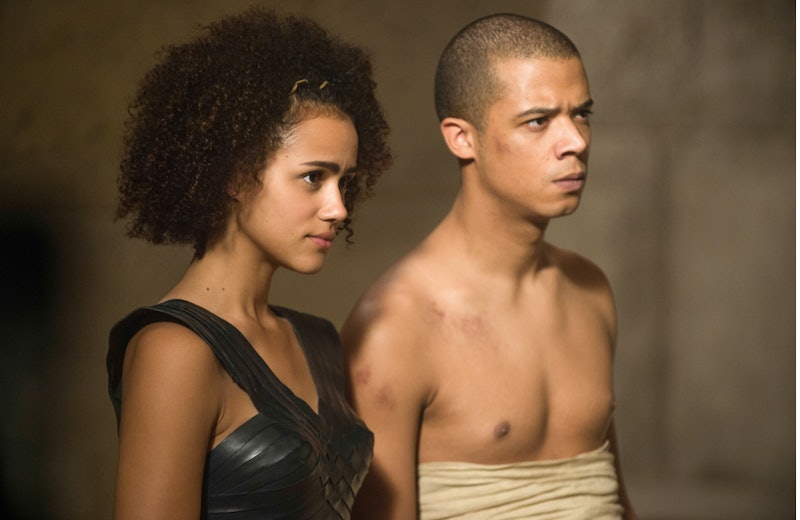 Sometimes, after an evening of watching a new episode of Game of Thrones, one might curl up in bed, fall asleep, and have visions of the dreamiest characters prancing in their heads. Maybe they're also doing boy/girlfriend stuff with you in your visions, like the Netflix and chill part, or the going on dates to the county fair part, or the meeting family part. It's no shame to dream that you're on a date with Tyrion Lannister because honestly, we've all been there. But how would our favorite Game of Thrones characters be as boy/girlfriends?

Sure, this is kind of a silly thing to surmise because not only are they fictional characters, but they are also characters in a world which doesn't really do the boy/girlfriend thing. They just go straight from betrothed to married to maybe a dash of adultery (and twincest). But this is the internet, and we can theorize about whatever the heck we want, because those are (probably) the rules of the said internet. And with such a diverse cast of characters that have some odd quirks, pretty intense life experiences, and really good hair, a relationship with one of them would be, at the very least, heated. Let's start, shall we?

Jon Snow has seen some serious sh*t. He is wounded. He needs a lot of love to pull him back to normalcy. When in a serious relationship with Jon, one would have to be careful not to bring back his PSTD: that means no daggers, no big chunks of ice, and no red-headed beauties. I would suggest a lifetime of quiet reading.

Sansa, too, has been through a bunch, and honestly really just needs some time alone. If the plan is to be in a relationship with Sansa Stark, expect someone who's not quite there and is constantly looking for something better. She's really not ready for anything serious just yet. She's been with some real psychopaths.

Speaking of Sansa's psychopaths, Ramsay's next on the list. There is no winning with this weirdo. We already know he'll just do totally crazy nonsense all the time. Even if he's being nice and giving you a gift, it will probably be the finger of a small child or something insane like that. The best way to date Ramsay Bolton is to "accidentally" murder him in his sleep.

Theon has been stripped bare. His ideal relationship is probably someone who will just spoon him every night and whisper a sweet bed time story into his ear. Maybe some gentle walks around a garden. But that's it.

Arya is a typical teenager, unsure of what she really stands for. She is probably looking for someone to help her take down her kill list and then just go to the mall. So if you have a desire to kill bad guys and a desire to hang with a teenager, Arya's a good bet. Just don't tell Gendry.

Cersei comes as a package deal with her twin brother, Jaime, so that's cool if you're into that sort of thing. She will latch on only if you've got the power, so she's recommended only for politicians and social climbers. With her by your side, you can take down the town country club. Just make sure there's also a seat for Jaime at your world domination table. Oh, and keep your wine cabinet well-stocked.

Let's be real. Tyrion is the ideal match here. He's smart, he's handsome, and he can get dragons to listen to him. One would simply have to be careful that the drinking doesn't get too crazy, but if you're into drinking and playing fun games, do it up.

If you're considering Dany as a hypothetical girlfriend, I suggest you look elsewhere. She is fireproof and the Mother of Dragons and not to be taken lightly. Girls and boys like Dany are pretty unobtainable. Do you always want to be running around not feeling good enough because you didn't break a bunch of slaves' chains this morning?

If you are looking for a strong, independent gal who also happens to straight up run the Iron Isles (hopefully), Yara's the one for you. She might not be the most empathetic, but maybe she'd change that for the right guy or girl. Or maybe you could just... get used to being mocked.

Sure, Littlefinger's got a little bit of that silver fox thing going on, but one would always have to make sure he wasn't trying to use them to better himself. He's also always going to be hung up on his lost love, Catelyn Stark, so that elephant will always be taking up the room.

Missandei is quite the catch. She's beautiful, she speaks a zillion languages, and she is poised AF. And she shouldn't be too hard to pull away from Grey Worm because they haven't even officially DTR'd. A side of her will always be thinking about her stoic partner-in-crime, but, with the right amount of respect and just a dash of passion, Missandei could be won over.

Grey Worm's only got eyes for Missandei. She's the first girl who really got this Unsullied guy. And she doesn't seem to mind that he don't have his testicles or, seemingly, his vocal cords. Grey Worm would be tough to be in a relationship with for those of us who enjoy conversation. He's super hunky, but is it really worth it if you can't communicate?

Like Cersei before him, Jaime comes with the price of his sister. That being said, he would always protect your honor and has a lot of Lannister gold behind him. Those are all positives if you're into that sort of thing.

For a 1000-year-old, Melisandre looks pretty good, but that doesn't mean she wouldn't give you a bunch of sh*t all the time about how your generation is so much more selfish than all the other generations she's hung out with. However, if you do end up dying unexpectedly, she might be nice to have on your side. Just make sure she's not birthing any shadow babies without telling you.

For some reason, not too many men have ever been into Brienne in a romantic way (except maybe sorta Jaime and also now Tormund Giantsbane), even though she is honestly kind of a babe and also super smart and independent. Brienne would be super loyal and take great care of anyone she partnered with.

Davos is so grouchy all the time, which makes sense because everyone around him is seemingly losing their minds. He needs a nice light presence in his life to keep him from losing his mind. Kinda like Shireen, but not dead and more of an appropriate age for his old man self.

Who doesn't like the dangerous, and just maybe a tad crazy, partner? Ellaria is, at the least, adventurous and, at the most, passionate. She'll be fun and all, but might end up giving you a death kiss if you piss her off. Worth it? Maybe.

I truly hope you'll take the time to have sweet dreams about some of the good oneson this list as you whisk yourself away on the shores of sleep. Happy dreaming, y'all.