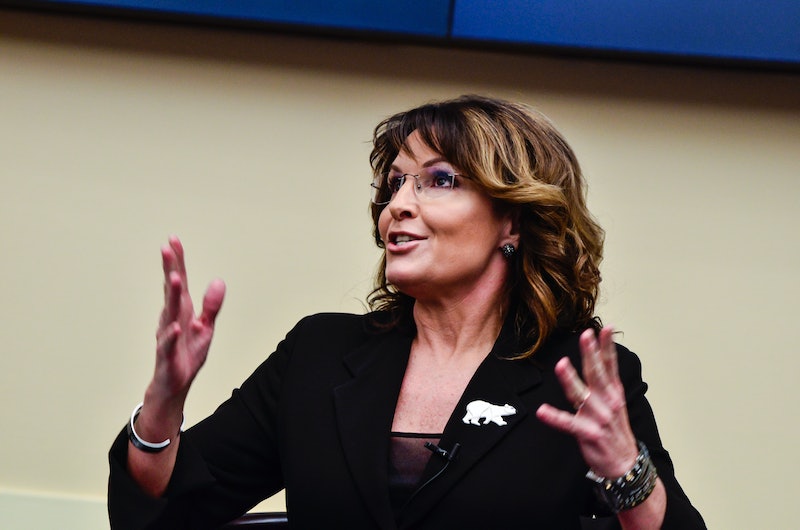 Over the weekend, Ben Carson supposedly spilled the beans on Donald Trump's list of potential running mates, naming John Kasich, Marco Rubio, Ted Cruz, Chris Christie, and the Alaskan jewel of the 2008 election, Sarah Palin. If Trump does end up choosing John McCain's former running mate as his own, America would have some serious déjà vu any time she gave an incoherent speech about how she and Trump would Make America Great Again. Not to mention how there are quite a few awful moments from Palin's last time on a presidential campaign which nobody wants to relive. Nobody.

Since 2008, Palin has become a caricature of herself. Tina Fey spent the entire 2008 election dressing up in skirt suits and babbling nonsense as Palin every week, highlighting how hard it is to understand anything she says. Aside from her often incomprehensible sentences, she's the queen of evading questions she doesn't want to answer (or doesn't know how to answer). A second Palin vice presidential bid would certainly be entertaining, but does America really want to endure that again? There are plenty of gaffes from the 2008 election that exemplify how extremely uncomfortable it would be to have a Trump-Palin ticket in 2016.

When She Didn't Know What The Bush Doctrine Was

The Bush Doctrine refers to the constantly evolving declarations by George W. Bush on protecting America, which a vice presidential candidate should definitely know about. However, when ABC News anchor Charlie Gibson asked Palin if she agreed with the doctrine as Bush laid it out in 2002 (before the nation launched into the Iraq War), it quickly became clear she didn't know what Gibson was referring to. He explained that he interpreted the doctrine as "the right of anticipatory self-defense." Palin eventually responded, "If there is ... enough intelligence that tells us that a strike is imminent against American people, we have every right to defend our country," but her lack of knowledge was already apparent.

When She Denigrated Minimum Wage Efforts

In response to Elizabeth Warren's calls to increase the minimum wage for fast food workers, Palin launched into a bizarre rant about Democrats hating fast food companies. In a video statement, she said: "I thought fast food joints... don't you guys think they're of the devil or something. Liberals, you want to send those evil employees who would dare work at a fast food joint that you just don't believe in — I thought you wanted to, I don't know, send them to purgatory or something so they all go vegan." She was really confused as to why anyone cared about minimum wage employees. "Why are you even worried about fast food wages?" she asked.

When She Couldn't Name A Single Newspaper

Katie Couric tried asking the politician what newspapers and magazines she regularly read to establish her worldview before joining the presidential campaign, but Palin couldn't name a single publication. "I've read most of them, again, with a great appreciation for the press, for the media." When prodded to name specific papers she read, all she could say was, "All of them, any of them."

When She Called Afghanistan "Our Neighboring Country"

While speaking at a San Francisco fundraiser, Palin praised American troops for their efforts in Iraq and Afghanistan, but mixed up where exactly Afghanistan is located. "They are also building schools for the Afghan children so that there is hope and opportunity in our neighboring country of Afghanistan," she said. America's neighbor? Are you sure?

When She Had No Idea What The Bailout Did

In another interview with Couric, Palin made it clear that she had absolutely no idea how the financial bailout worked. "What the bailout does is help those who are concerned about the healthcare reform that is needed to help shore up our economy," she attempted to explain. "It's got to be all about job creation, too — shoring up our economy and putting it back on the right track." Actually, the bailout had nothing to do with healthcare or creating jobs.

When She Didn't Know What A Vice President Does

Perhaps worst of all, Palin wasn't even sure what the job of vice president entails. CNBC asked her about potentially running with McCain, and she said: "As for that VP talk all the time, I tell you, I still can't answer that question until somebody answers for me: What is it exactly that the VP does every day?" Someone must have explained it to her, because she eventually chose to run.

Another Palin campaign would no doubt result in similarly cringeworthy blunders.